Touched by a Lemur 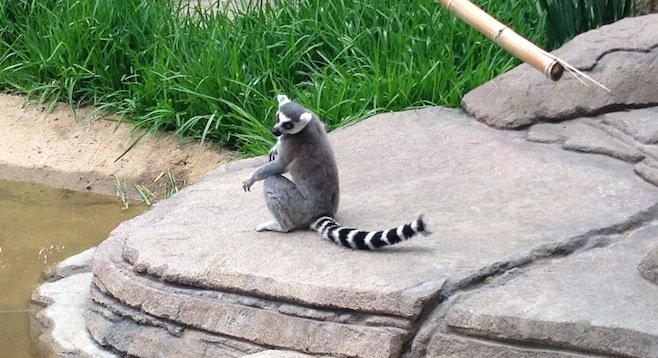 My sister Jane — a bold, don’t-take-no-for-an-answer saleswoman — lives by the adage, “It doesn’t hurt to ask.” Even when she knows a request is unlikely to be granted, she still throws it out there because, as she says, “You never know.”

It is with my sister’s persistent spirit that each time I see my friends at the San Diego Zoo, I recite the same question they’ve heard so many times they don’t even bother answering with words anymore, choosing instead to either shake their heads or roll their eyes in response.

Albert Einstein said that insanity is doing the same thing over and over again but expecting different results. But, like my possibly insane sister, I push on, ever optimistic that, one day, the answer to my perennial question will be different.

After learning about the latest zoo news my friends are touting, be it the polar bears’ new digs, the birth of a cheetah, a panda’s first birthday, or the huge new Outback exhibit with koalas and wallabies, the question I ask is: “Can I touch it?”

Though the answer comes in many forms (polite explanations, laughter, etc.) it is almost always “no.” I say “almost,” because there was that one during one of the Backstage Pass tours that I got to touch, ever so briefly, a curious kangaroo. I could have touched the rhino, but only to feed it, and I didn’t want rhino slobber all over my hands. Of course I get to touch the goats and pigs in the petting zoo, but they’re just not the same as the exotic creatures with which I long to come into contact.

I bristle with envy every time ZooKeeper Rick posts a photo of himself cradling a koala or getting up close to an equally adorable, forbidden animal. Despite knowing full well that Rick only gets to handle those beautiful beasties because he’s an experienced, something-or-other-ologist, the little kid in me thinks,”Why does he get to touch them, and I don’t?” On the flip side, I’m pretty sure my friend Matt doesn’t have a biology degree, but as the zoo’s social media guy, he’s able to get closer to all of the wild things than most people.

During a phone chat, after my friend Jenny told me about the new lemur exhibit at Safari Park, I popped the usual question, albeit with an empty, dejected heart. “Can I touch them?”

“No,” Jenny said. I thought that was the end of it, until she added, “But they might touch you.”

My heart skipped a beat and I almost lost my grip on the phone. “Don’t mess with me, that’s not cool,” I said. But she wasn’t messing with me. Apparently, at the new Lemur Walk, you get to be inside the enclosure with the ring-tailed lemurs. Jenny warned me that trying to touch a lemur was a big no-no, that people aren’t even supposed to bend down because it could intimidate the critters, but she gave me tips on how I might attract the fluffy, big-eyed, cat-monkey creatures, thus increasing my chances of being approached.

“We need to get glitter,” I said to Jen, my official zoo buddy and therefore the one person I asked to assist me in my quest to be touched by a lemur. “They like sparkly things. You know, now that I think about it, raccoons also like sparkly things, and they also have those little hands… I wonder if it’s somehow related.”

“Smart,” I agreed. “If one of those fluffy ringed tails were to brush against my calf as a lemur walked by, I’d want to feel it. Oh, and one more thing — apparently they like sweet smells, so choose your fruitiest lotion.”

The day before our excursion, Jen sent me a YouTube video of two sisters who were approached by one of the lemurs in the new exhibit. The lemur got on its hind legs and put his itty-bitty human-esque fingers on the girls’ shins. After watching the video no fewer than six times (and possibly as many as 15), I called Jen. “Okay, here’s the deal — I want a lemur to climb me like a tree, sit on my shoulder, and drape its tail around my neck like a freakin’ furry necklace.” Jen agreed that such an encounter would be all kinds of awesome.

I’ve seen all three Madagascar movies. Usually I wouldn’t be interested in cartoon sequels; all too often they tend to be paltry echoes of the original creation. But I was drawn in by Sacha Baron Cohen’s lemur character. I was into lemurs even before that. Purring like cats, features like raccoons — they’re an amalgam of cute and clever creatures, with a pinch of human-like attributes, which makes it that much easier for them to be anthropomorphized.

It was early on a Saturday morning when Jen and I arrived at the park. Unusual for inland North County weather (which is often closer to the hot, arid safari climate for which it’s named), outside it was cool and overcast — perfect weather for strolling the expanse of the park. But I was only interested in one thing.

Jen had painted the toes of her converse with glitter nail polish. I reeked of lavender, vanilla, and blackberries. The lemurs were active, jumping and running above and around us. But we wanted more. At one point, a lemur came to the path on which we stood, and Jen and I froze like glittery, fruity statues. Her shoe polish worked. The lemur advanced toward Jen’s feet, paused to perform a terse inspection of the sparkly painted toes, and then whizzed by us to scale the netting back to one of its heated hammocks.

No lemur touched me. But, as a consolation, one perched for a while on the lemur sign and seemed to pose for me as I snapped shots of it. It wasn’t a fluffy tail brushing my cheek, or little fingers clutching at my sandals, but it’s a start. 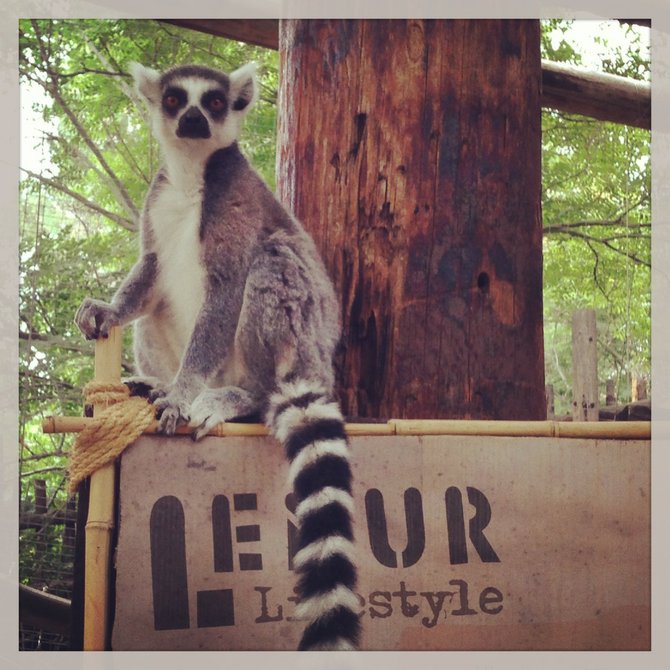