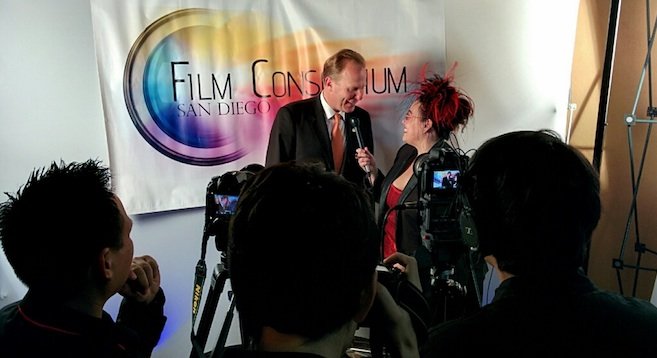 I leaned forward to retrieve my phone from my purse and felt a watery trickle making its way down my right nostril. I jerked my head back, sniffed mightily, and smiled a little too wide at the woman beside me. Her name was Evie, and she was an actress who specialized in martial arts. On this night, she was my spotter, meaning she would assist me by identifying notable faces, whispering their names and titles in my ear, and then steering them toward me so I could ask them a few questions for the cameras.

Guests would soon be arriving to attend the first San Diego Film Awards, organized by the Film Consortium, San Diego. I had helped judge the art/experimental film category, after which I was invited to conduct interviews with presenters and nominees on the red carpet. Sam Diego — radio personality, event producer, and the city’s resident Johnny Depp-as-Captain-Jack-Sparrow lookalike — was in full pirate costume and getting set up to “pillage and plunder” quotes from members in the waiting crowd.

Before I’d made the mistake of tipping my head forward to look for my phone, Evie had been briefing me on all the headshots and notes in her folder. I sniffed once more for good measure and met Evie’s eyes. “I wasn’t doing cocaine in the greenroom, I promise,” I said with a somewhat crazed nervous giggle. She smiled, nodded slowly, and then excused herself to go get changed. I had arrived ready, bedecked in red sequins and topped with a feather fascinator (I planned to tell everyone I’d killed Sam’s parrot and made it into my headpiece). Now if only my body could get with the program, I’d be golden.

I’ve never smoked crack. At least I don’t think I have — there was that curious-tasting cigarette I was handed at a party that one time — let’s just say I have never intentionally or knowingly smoked crack. But I’m pretty sure that if I had, it would affect me the same way as the tiny, white 24-hour Sudafed I’d taken an hour earlier.

I’d taken the pill for its intended purpose, to clear up congestion. It was the first sunny day after a big rainstorm, and pollen from the recently fed flowers had found its way into my sinuses. When my pipes are clogged, I get groggy. So, I admit, I also wanted the energy I knew I could expect from pseudoephedrine. It had been months since I’d needed a decongestant, but I remembered the jolt was worth several cups of coffee.

After preemptively offering a defense to a few more people, it occurred to me that voluntarily denying the use of illicit drugs would only put the idea in people’s heads and make them suspicious. But I couldn’t help it. I was buzzing with nervous energy and sniffling like I was in the middle of aColor Purple and Steel Magnolias marathon. I couldn’t not comment. Fortunately, the sniffling was beginning to subside by the time Evie returned and the rope to the red carpet was lifted. The next two hours were a blur.

I could barely hear Evie’s whispered names over the commotion. The cramming we’d done earlier paid off when I found I recognized most of the faces of the people I needed to grab — Wally Schlotter, former film commissioner who was receiving a lifetime achievement award; Joe Terzi, president of the San Diego Tourism Authority; and, of course, Kevin Faulconer, who’d just been elected mayor and would be presenting the award to Schlotter. As they came and went and I asked soft-as-the-feathers-on-my-head questions, I continued to remind myself not to call attention to the fact that my scalp was a rave at which every hair on my head was dancing.

I was unconscious of the fact that at some point in the evening I’d given in to an old nervous tic, tapping my front teeth together. I’d developed this habit as a child, just after I’d busted my two front teeth by falling face-first off my bicycle. A dentist had applied bonding — a tooth-colored plastic resin — and I developed a habit of testing the stuff’s durability by applying pressure using my other teeth. My right front tooth is porcelain, and it always holds. The left one, however, has always been tenuous. And the more nervous I am, the sooner its expiration date.

After I’d wrapped my gig at the film awards, David, who’d been putting in some hours at his studio a few blocks away, collected me from the Horton Grand Theatre downtown and took me to Gossip Grill in Hillcrest. I was on the third bite of my sandwich when it happened — the bonding on my left tooth came apart in my mouth. I froze mid-chew and David looked at me with great concern. I pulled the chunk of fake tooth from my mouth and held it up. David eyed me warily. He knew from past experience that at this moment, even the slightest breeze in the wrong direction and the rest of me would crumble like my failed tooth. But instead of freaking out, I threw back my head and roared with laughter. “Oh, man, I’m so glad that happened now and not a few hours ago,” I said. “Could you imagine if I were going around all cracked out and I was missing my front tooth? They’d never let me near a red carpet again.”

David looked so relieved, I felt a pang of regret for all the times I failed to laugh something off. I made a mental note to try and be more easygoing. David, on the other hand, didn’t need any encouragement to make light of my pitiful condition. For the next three days (my dentist was out of town at some seminar), I not only had to endure the sharp edge my masochistic tongue kept seeking out, but also my amused husband, who followed me around the house singing, “Dang-da-dang dang dang dang dang dang dang,” to the tune of “Dueling Banjos.”