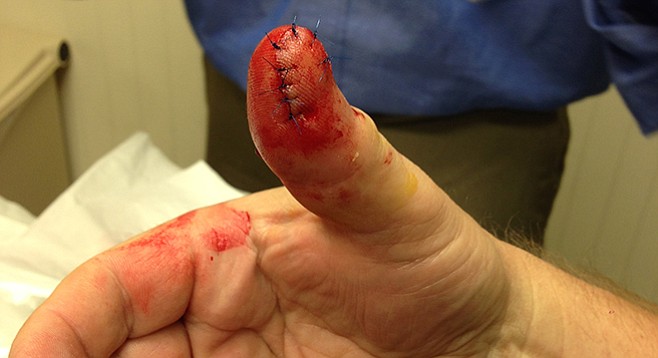 Oh, that’s not good. That’s not good at all.” Because David tends to talk to himself while cooking — usually about seasonings or calculations regarding timing — I was only half listening to his muttering. But when I looked up from my iPad Mini (on which I had been passing the time by reading the fourth book in the Game of Thrones series), I saw that David was holding his hands under running water. “Did you cut yourself?” It wouldn’t be the first such injury; a man spends that much time in the kitchen, he’s bound to get scraped and burned. With an inward hiss, David sucked air into his mouth through gritted teeth. Still seated, I said, “Is it bad?”

“Yes, it’s bad,” David said. At this, I jumped to my feet and joined him at the sink. David is an understater, the kind of guy who would suggest we consider taking an umbrella after being confronted by a biblical flood. If he said it was bad, it had to be worse. “Can you get me a Band-Aid?”

I rushed into the bathroom, located a bandage, and returned to the kitchen, where I finally noticed half a potato on the counter, beside the brand new mandolin we’d purchased for David’s mom the day before. I noted the thick slice-thickness setting on the mandolin, and then the blood dripping down the back of David’s clutched hand despite the flow of water rushing over and around them. I dropped the box of bandages on the counter and said, “Get in the car, I’m taking you to the emergency room.” Dinner will be late.

“But what about dinner? I’ll put a Band-Aid on it, and if it’s still bleeding later, we can go to the hospital.” If it were just the two of us, David wouldn’t have fussed about the meal he was preparing. But today he was cooking for 11 people at his parents’ house — cousins and siblings who, like us, had flocked to Martha’s Vineyard from all over the country to spend the weekend celebrating David’s parents’ 50th wedding anniversary.

“Forget about dinner, and get in the damn car.” I let my father-in-law know we were taking his Jeep to the hospital in case David needed a stitch or two and asked if he’d notify the crew that dinner might be a little later than expected.

David grabbed a paper towel, wrapped it around his thumb, and followed me to the car. “Will you text Emily and ask her to finish the cookies?”

“Yes, but not until we’re at the hospital,” I said. I drove down Middle Road, and for the first time in the many years I’d been visiting the island, I was oblivious of the resplendent rural scenery. “Don’t look at it!” I snapped, when I caught David’s movement in my periphery. “Keep the pressure on.” I made it like I only cared about his level of pain, but in truth I was also worried I might inadvertently see the wound, the mere idea of which sent shudders throughout my body.

David rolled his eyes at me. “I was just readjusting my hands,” he said.

“You know, it’s a good thing it happened to that thumb,” I said. “I mean, if you’d cut your right thumb? Buttoning or zipping up your pants, holding things, writing? That would be the worst — you use your right thumb for a million things. Could you imagine?”

I glanced over at David and caught his incredulous expression. “I did cut my right thumb,” he said. David separated his hands, demonstrating that he’d been using his left hand to cradle his right, and not the other way around. I did the only thing I could at that point, and burst out into contrite cackles.

After a minute of hysterical laughter and apologies, I tried to make amends by saying, “Well, it’s a good thing it wasn’t your index finger, right? I mean, could you ima—”

I complied for a few seconds but then, figuring he probably only wanted me to cease my audible imaginings of worser-case scenarios, I filled the rest of the 20-minute drive time by repeatedly insisting he not release the pressure.

“Ohmygod, check out your shirt,” I said, as David and I entered the empty emergency room through automatic sliding glass doors. When David realized he was wearing a black t-shirt with the words, “not that kind of doctor,” emblazoned in white, we shared a laugh. We’re geeky for the show, Doctor Who, from which the phrase was taken. “This should be fun,” I quipped.

After I’d helped David fill out an information form, a nurse led us to a large room in the ER ward. “Remind me to have my next emergency on the island,” I said to David, as we waited together. The Martha’s Vineyard hospital is like a resort. Many of the rooms have views of the ocean, and their permanent art collection includes three of David’s prints. Though it’s usually David’s father who is bragging about him at this hospital, I was quick to mention my man’s work to the physician’s assistant who’d arrived to get a closer look at David’s medical emergency.

“Okay, let’s just have a look here,” said the PA. He peeled away the bloodstained paper towel and scrutinized David’s thumb. “Yeah, you’re going to need stitches,” he said. “Good thing you kept that pressure on, or else you would have lost that whole section.” At this, I twisted my face into an I told you so expression.

The most horrendous part of the day, for both of us, was when the PA pulled back the flap that was the pad of David’s thumb and stuck a needle directly into the center of the wound to numb the area. I still shudder when I think about it, and David, my poor David — to see that look on his face, I felt his agony.

But my sympathy was soon replaced with anger that his carelessness in the kitchen had put us into this mess. When we were back in the car, I slapped him in the shoulder and said, “A BAND-AID? That guy just gave you eight stitches. Next time, use the damn safety protector before you start slicing away.”

David chuckled, and said, “Let’s get back, I need to finish making dinner.”