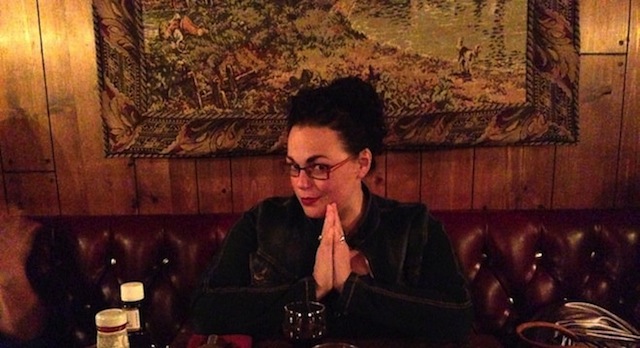 Terri shimmied toward the car — shimmied, because there was no way she could get one whole leg in front of another. The only wiggle-room she had was from the shin down, where her long, tight skirt flared at the bottom. Terri had been true to the text she’d sent me earlier: there was no mistaking the bottom half of her body for anything other than a mermaid tail. As she drew nearer, I could see that her twinkling, iridescent green and purple “scales” were hundreds of quarter-sized plastic discs.

“You’re a mermaid!” I said as Terri situated her “fin” into the passenger seat of my car. 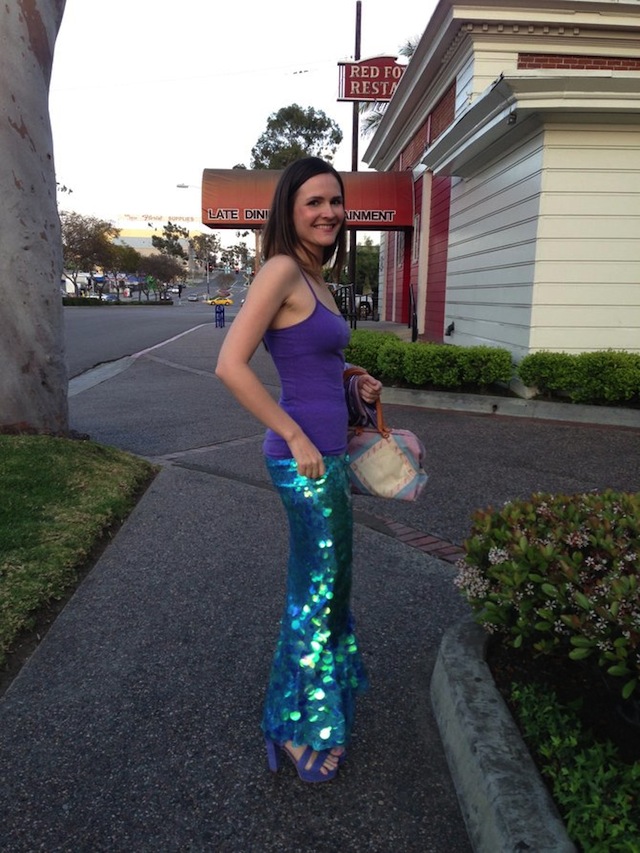 “Lynn’s wearing a red dress,” Terri said. “We were both supposed to wear red, but when I went looking for something red and sparkly, I found this instead.”

“I’m sure she won’t blame you; this was clearly the only option you had,” I said.

Lynn was the other birthday girl. According to the Facebook event “Terri and Lynn’s BirthdayFunTimes,” their birthdays weren’t on the same day, but they were combining their celebrations “to make us both look more popular.” First, a small group would meet for dinner at the Red Fox Steakhouse and Piano Bar, then a larger group for drinks at Live Wire, and Terri was hoping to end up at Taco Bell.

Because she couldn’t drive while wearing that get-up, Terri had asked me for a ride. Dinner was at 7:30, but the email from Adam — Lynn’s man — encouraged people to arrive at 6:30 for pre-dinner drinks. Terri, aware of my reverence for punctuality, knew that I’d be there no later than 6:25; therefore, I was her best bet at arriving on time.

We (David, Terri, and I) were already 45 minutes in and on our second cocktail by the time the next person in our party showed up. While Terri and I spent the time catching up, David joined the bartender and some random guy in guessing answers to Wheel of Fortune, which was playing on the television in the corner above us. I was mildly disappointed when everyone else began arriving just in time for dinner; I couldn’t remember the last time I’d seen Jeopardy.

We were led to an upstairs room that none of us had known existed. Every time I’d been to the Red Fox Room, I’d never made it past the piano-bar area. But just past the bar and up a small flight of stairs exists a large room with red booths, wood paneling, and a giant tapestry. I made it a point to walk behind Terri so I could watch her struggle sideways up the steps.

Our party was seated at the far end of the empty room — two big booths on either side of a small table. I sat first, on the booth side of the deuce in the middle. David remained standing and looked down at me. “This table for two in the center should be for the birthday girls, don’t you think?”

“I’m not getting stuck between people in a booth,” I said. “What if I have to pee? I need my back to the wall and I need an out, and here, I have two.” I gestured at the gaps on either side of the two-top. David disagreed with my reasoning, but I glared him into silence. Five people (including Terri) sat in the booth to my left. For the rest of the evening, David and I referred to this as “Team A.” Five other people, including Lynn, sat in the booth to my right, or “Team B.”

Once he got over the fact that I wasn’t going to give up the power seat, David and I, now privy to conversations on both sides, made a game of figuring out which group was more entertaining.

Inspired by Terri’s ensemble, Team A immediately dove into the critical matter of mermaid genitalia. A woman whom I hadn’t met before spoke authoritatively about the location and color of a mermaid clitoris and informed her table that mermen’s penises are about the same size. A man from the opposing team’s table happened to catch this “fact.” Incredulous, he asked where she was getting her information. Our mermaid biologist looked up from her phone and declared, “I’m on Yahoo Answers, and that’s pretty legit.” 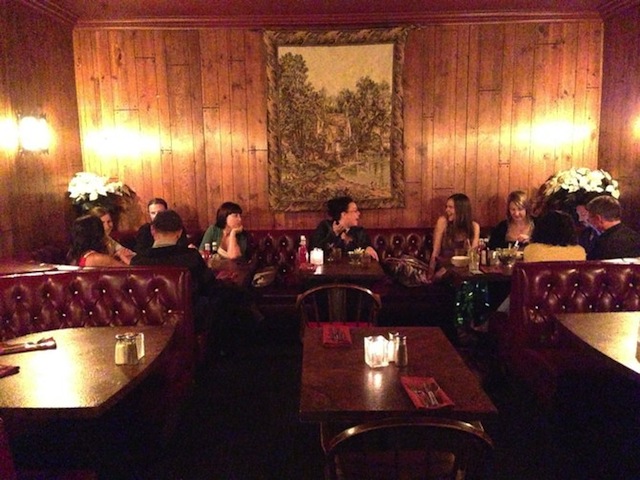 Meanwhile, Team B was off to a poor start as another person I’d never met before was describing something about kids in lines at Disneyland. David and I caught each other’s eyes, rolled them, laughed at our temporary mind-meld, and then went back to listening in on Team A’s conversation.

As dinner commenced and more drinks were consumed, the two teams joined to compete on a single topic — astrology, or, more specifically, the controversy regarding the slow precession of the cosmos over the millennia, and how this may affect everyone’s astrological sign. A member of Team A had launched the subject (point Team A) with a discussion of the 13th sign (Ophiuchus, or Serpent Bearer). Whether there were 12 or 13 signs made little difference to me — I had been gleefully bashing the whole concept of astrology as “nothing more than entertainment.”

Team B joined the scrum when the woman to my right leaned in to say there was no way she could be a Leo instead of the Virgo she identified with.

“It doesn’t matter — astrology is all bullshit anyway,” I said. “That’s why it’s in the entertainment section of the paper. Twelve, 13, do you really think people can be categorized into so few signs? I could read any sign’s horoscope on any given day and easily apply it to my own life.”

As she dove into her phone to retrieve the traits of Virgos and Leos so that she could prove she was a Virgo and not a Leo, David said to her, with an impish grin, “You’re demonstrating very Leo behavior.” After that, David attributed everything she said to her inherent Leo-ness with phrases such as, “That’s such a Leo thing to say.”

By the end of dinner, David and I had declared a tie: both teams had entertained us equally, and I, with my newfound knowledge of mermaid anatomy and the latest advancements in astrology, felt more prepared than ever for the next episode of Jeopardy.