The hardship of finding good help 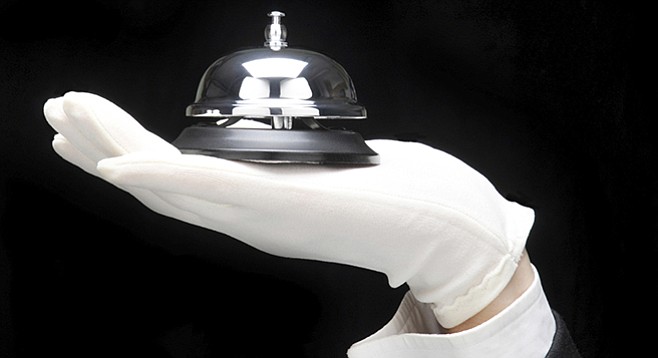 I hesitated to say the word because I knew I’d catch flak. At first, I just danced around it. “I have a person coming,” I’d say, or, “I’m waiting on a friend…who’s also going to help me out a bit.” But while on the phone with my sister Jenny, I finally let it slip, in an apologetic tone: “I gotta go — my intern will be here soon.”

“Wait — intern?” Jenny laughed. “I’m sorry, that just reminded me of the Real Housewives of New York City. You know, how everyone’s always talking about Sonja Morgan’s interns.” No, I told her, I didn’t know. So, after giving me a disclaimer about how watching the show is a guilty pleasure, Jenny explained, through giggles, that this Sonja chick’s ever-present entourage of young assistants is an ongoing wonderment, both to viewers and the “housewife’s” fellow reality stars. “She’s always got three or four of them just following her around, and no one knows why they’re there or what they do for her,” Jenny said.

After hiring my intern, I joked online that I felt like Kramer in that one episode ofSeinfeld. In the episode, Kramer hired an intern from NYU under the auspices of his corporation, Kramerica Industries. The joke was that Kramer didn’t have a “real” job, so the “corporation” was nothing more than one kooky man trying to breathe life into some of his entrepreneurial ideas (such as a rubber bladder for ships that would help contain oil spills, or selling ketchup and mustard in the same bottle). It might have seemed insane at the time, as most normal people had office jobs, but re-watching the shows on DVD, Kramer just seems like an eccentric freelancer. I lose track when trying to count how many of my friends and colleagues freelance.

Even though working from home is more common today, and even though I have worked from home for over a decade, the idea of having someone else work from my home along with me blurs the clear black line in my mind between “guest” and “employee.” In an office, I’d have no problem asking an assistant to get me coffee. But sending someone into my kitchen to grab one of my mugs from my cupboard and make me a cappuccino using my machine is just weird. At least, it is for now.

When we first met, David was seriously considering hiring a butler. “I don’t want someone to wait on me hand and foot,” he explained. “I just want, like, an executive assistant or a personal assistant, someone to take care of all life’s miscellaneous details, like groceries, laundry, and dust. Someone I don’t have to explain every little thing to. I want a Jeeves.” The cost for what was essentially a valet (not the guys who grab your car, but a full-on manservant) turned out to be prohibitive. So, David made do with work-related only, and not personal, assistants. He’s gone through four in the time I’ve known him.

“I’m not good with interns,” David said on the day ours was supposed to officially start. Well, not really “ours” so much as “mine” — I’m the one who signed all the paperwork for Grossmont College’s Internship Program.

“You’re not good with any type of employees,” I said, smiling to let him know I meant it as a fact, not an insult. David nodded; no sense in denying what he has said on multiple occasions. To clarify, I added, “You just have high expectations. You want every person who works for you in any capacity to be able to make the same kind of intuitive decisions you would make, and you’re absolutely unrelenting when they don’t.”

“The problem is I want them to be like a mini-me, and they never are,” David said, sounding downcast. “I feel like, if I have to show people how to do things and then supervise them — if I have to micromanage them because they’re not doing it right — then I might as well do it myself.”

After firing his last assistant, David gave up on the idea of ever getting good help. That was ten years ago. When I asked him why he sucked so much as a boss, David said, “I lack social skills. I’m not good at praising people, I just want them to come and do the job well for its own sake. It’s not that I think they’re undeserving of praise, I just wish I could praise them, you know, like you do.”

“Well, you know I live for praise,” I said. “That’s probably why I’m so good at it. I say the things I wish someone would say to me.”

Of course, it’s much easier to praise someone when they’re doing great work. I’ve had trouble with a few assistants in the past, mostly because they were young and inexperienced. Instead of freeing up my time, they siphoned it away with their questions and confusions. Like David, I found that it was cheaper and faster to do things by myself. The trick, I now realize, is to find people who are awesome and make sure they’re not only well compensated but also know they’re appreciated.

Most interns are college kids who trade their assistance for the experience and college credits. But, unlike the interns I used to deal with at NBC studios (who pretty much just stood out of the way hoping for an osmosis miracle), my intern, the one I now have, is a bit older and more experienced. He’s a veteran going back to school with the help of the G.I. Bill. Having been military-trained, he’s punctual and efficient, and because he’s transitioning to a career that excites him (media production), he’s extra attentive.

The only problem is, as I grow more comfortable with the art of delegation, I find myself contemplating what life might be like with a butler.