SYM-phony (Try to say “symphony” with a straight face) 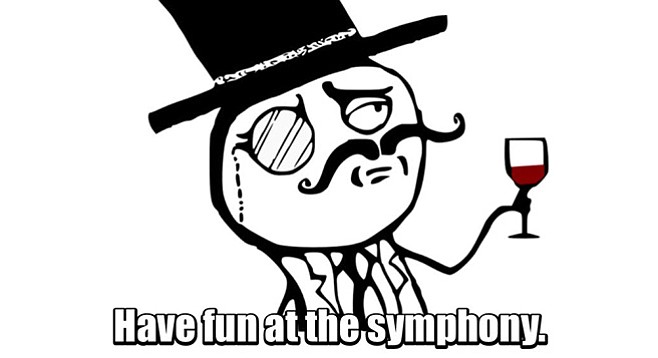 When Jenny asked me what I was doing later, I hesitated to answer. I knew there was no casual, comfortable way for me to say it, and this sister of mine has the quickest wit in the West. It’s one of the many things I admire about her. My only way out of this was to make fun of myself before handing over the baton. “I’m going to the symphony,” I said, but not the way a normal person might say it. The word “symphony” came out with mock upper-crustiness — nasally, with an emphasis on the first syllable. I paused dramatically before the word, so it was more like, “I’m going to the…SYM-phony.”

As expected, Jenny laughed. “Yeah, there’s no way to say, ‘I’m going to the symphony,’ without sounding pretentious,” she said.

I could count on two fingers how many times I’d been to the symphony before. The first was back in 1998, during the two years I lived in Los Angeles. A coworker took me to see the L.A. Philharmonic. We had great seats, right in front, but what I remember most was the sound of the music and how it enveloped me. Despite my positive experience, when it came to deciding what to do on any given Saturday night, I continued to opt for DJs over conductors. My second symphony was a decade later, when I surprised David for his birthday by taking him to the Boston Pops. A Boston transplant and once an audio engineer, David waxed poetic about the legendary acoustics of Boston Symphony Hall. The acoustics were impressive, for sure, but this was in December, so it was basically a lot of familiar Christmas music.

Now, seven years later, I was heading to the San Diego Symphony, thanks to my friend Kimberly, who’d arranged the double date when she learned of David’s fondness of classical music.

“I can’t say ‘symphony’ with a straight face,” I said as David stood behind me to fasten my necklace. “I feel like I need to say it in a royal British accent and add a disclaimer. Otherwise it feels like…I don’t know, like I’m playing dress-up, but really sucking at it. Why does the symphony sound pretentious?”

“Well, people who go to the symphony tend to be more affluent, and they tend to be older, which means they probably have more old-school values, which could be perceived as being stuffier. And they’re listening to antique music — most pieces performed were composed over 100 years ago. So I could see why younger people might think it’s just something old rich people do, and how they then might stereotype and think anyone who goes to the symphony is a snob. It’s a lot like wine. If you don’t know anything about it you might be afraid of looking stupid, so a natural protective mechanism would be to mock it instead.”

Inside the lobby at symphony hall was an ocean of blue hair. David pointed out a young girl of about 14 and joked, “There, it’s settled. You’re not the youngest one here.”

I was surprised, but relieved, to see that Snake Oil Cocktail Company was running the bar. I expected expensive-but-no-frills options, like vodka and tonic, not craft cocktails with bits of fresh fruit in them. The theater was packed. Who knew this many people went to the symphony? Sitting right in front of me was the little girl from the lobby, and her escort, an elderly gent in a suit who was around 80.

The lights dimmed and the orchestra began to play. The music was much softer than I remembered from my past experiences. If it were a stereo, I would have turned it up. I wondered if it was quieter in the back, where we were seated, or if I’m just hard of hearing. (David used to tell me that every time my ears rang after a concert, it meant I’d suffered permanent hearing loss.) Eventually, either the music grew louder or maybe I adjusted to the volume, and I began to relax.

I didn’t know what to do with my eyes. The conductor waved his arms around, but the musicians were seated, all calm and collected as they played those notes penned by a guy who died before light bulbs were a thing. I closed my eyes for a moment, but soon enough, my lids popped open and I was watching the crowd. Particularly, the two in front of me.

The little girl appeared as though she’d fallen asleep. The elderly gent — her mentor, who clearly wished to broaden this girl’s horizons by exposing her to the greats — looked distressed. He kept glancing down at her, an eager look in his eyes. He nudged her leg, then her arm. But this is the best part, I could hear him thinking, as each time he nudged, her lashes briefly parted and then fluttered back together again. Maybe she was tired. Maybe she was bored. Her small hand clutched a giant smartphone whose screen remained dark for the duration of the evening. I related to that girl. I wanted to leave or check my phone or sleep. But later, after arriving home, I looked for my favorite Chopin piece. I loved it so much I learned to play it myself, on the electronic keyboard I haven’t touched in six years. It’s a dark, moody melody in a minor key. It made me think of raindrops on the window, and brows that furrow in preparation for tears that never come. It was yearning, it was hope; it was acceptance. I realized that the only reason the symphony hadn’t resonated with me is because I didn’t care for musical selections. If the orchestra had been playing Chopin, I would have been as eager as that old man to share the rapture with loved ones.

When David said he’d found a program he thought I’d like, scheduled for the end of the month, and asked me if I wanted to go, I did not hesitate. “Yes,” I said, “I’d love to return to the SYM-phony with you.”