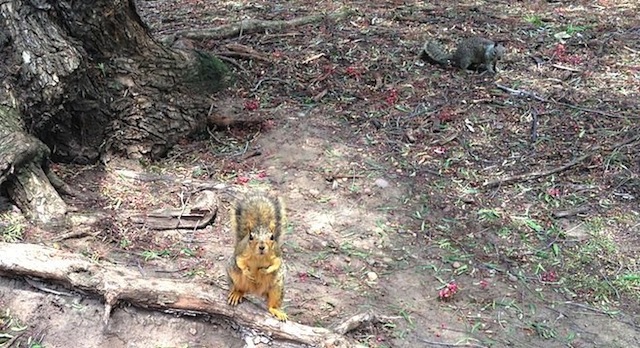 Red in front, scraggly gray in back

Dad thought I was kidding when I warned him that I wouldn’t be able to restrain myself if he lured that squirrel any closer. “David says I have a Snow White complex, but he doesn’t know what he’s talking about,” I explained, as if this would convince my father that I was being serious.

David had indeed accused me of suffering from his mythical malady, but he couldn’t have been more wrong — if anything, what I have is a Sleeping Beauty/Cinderella complex. “Get your Disney princesses straight,” I snapped, after lecturing him about the difference between each princess’s unique relationship with the wild kingdom. “Snow White’s animal friends were skittish and reluctant. But Cinderella had Gus Gus — all those mice talked and wore clothes. Sleeping Beauty was close with her forest friends — that owl was practically human when the little birdies helped him impersonate the prince so he could dance with Aurora.” The mention of this scene, of course, led to my rendition of, “I know you, I walked with you once upon a dream.” I had almost reached the third verse before David dropped his I don’t know what’s happening expression and sought refuge in Instagram.

My father, now flaunting the bemused countenance of someone who has given up on attempting to comprehend my crazy, “accidentally” dropped a Sun Chip in the dirt by his foot, his smile at me as he did so almost a challenge. “You don’t know what you’re doing,” I said.

Fortunately, the first furry forager to approach was a ground squirrel — the scraggly gray cousin of the gorgeous, reddish brown, and delightfully fluffy-looking tree squirrels that share Balboa Park. “You know, it’s funny that David should be all, like, ‘Don’t touch squirrels,’ seeing as he’s the one who showed me it was possible,” I grumbled as I watched the squirrel nibble away at the chip that was comically large for its little hands.

Years ago, on a road trip up the coast of California, David and I spent some time at Morro Bay, where the rocks by the water are teeming with what I called “beach squirrels.” David provided me with a jar of peanuts and then watched as I sat on the ground and fed the critters by hand. One fat squirrel even let me pet its back while it systematically snatched nuts from my open palm.

“If David hadn’t done that for me, I never would have gotten hurt,” I said. I gestured behind me. “It was right over there that it happened, not ten feet away from where we are now. Do you remember?” My father nodded and took another bite of his turkey, swiss, and mustard sandwich. “That squirrel was fat, too, but not just fat — it was also fluffy. Kind of like that red one over there, but even bigger.” I noted silently that the red one was making its way toward us. “I thought its chubbiness meant it was people-friendly, but when I reached out to pet it like the one in Morro Bay, well, you know what happened.”

My father snickered a bit at the memory. As initially frightful as it might have been to get a call from his daughter in an emergency room, Dad — along with the rest of my family — couldn’t hide his amusement once he’d learned of the circumstances. My sister Jenny, who’d been with me during the attack, had dubbed the rotund rodent Don Squirreleone. When I went in for a pet, rather than continuing to gather peanuts off my shoe, the chubby squirrel with one missing ear jumped up and clung onto my forearm with its tiny claws as it buried its huge buck teeth into my finger.

I don’t know why anyone who knows me thought that incident would teach me some kind of lesson. I have a jagged scar on my neck (St. Bernard), smaller scars on one eyelid and arm (Persian cat), and a broken tooth (Shetland sheepdog), and those were all there before I met Don Squirreleone. Considering all the horses I’ve had the chance to pat, I’m lucky I haven’t been hoof-kicked in the face yet.

I did remember the pain after my last squirrel encounter — of my wounded finger, scratched up arm, and the shots I had to get — and I didn’t want to relive it. But when my dad finally noticed the red one inching closer and tried to scare it away, I begged him to stop. But he kept stomping his foot and shaking a plastic bag at the bold animal, so like an alcoholic who’d fallen off the wagon, I tried another tactic.

“I need it close enough to take its picture,” I said, whipping out my phone. “I’m not going to touch it, I promise.” I refrained from admitting that if it got close enough, I was hoping it would touch me. 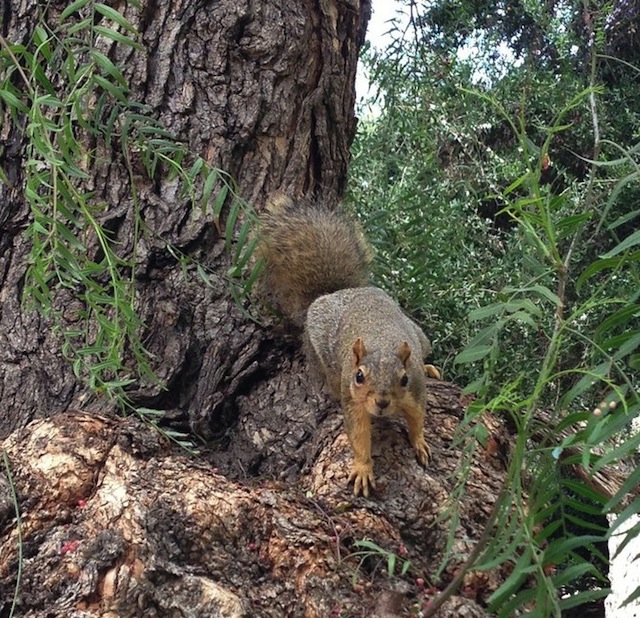 Squirrelik the Red, ready to pounce

Ever the helper, Dad scattered some crumbs nearby to help me “get the shot.” The familiar arm-jerking motions of a human tossing food rallied the attention of more squirrels, whose heads seemed to appear from everywhere and nowhere, all at once. “Holy shit, there’s hundreds of ‘em,” Dad said. I kept my attention on the giant, fuzzy red tail at my feet, which the ever-bolder red one was twitching over its head like a small soldier brandishing the most adorable weapon.

“It is kind of unnerving to have so many of them surrounding us,” I said. I thought of other creatures I found cute in small numbers, but absolutely terrifying en masse. Like birds, or toddlers.

Jenny and I had been surrounded the day of the biting incident as well. The squirrels had closed in on us, gathering in droves on every side. Nervous, my sister had jumped to her feet. But I had, regrettably, remained seated in the grass, naively coaxing the fat guy forward and shaking my foot with the nut on it in the most squirrel-tantalizing way I could.

Now, while other squirrels moved in, my dashing Squirrelik the Red skittered onto the tree beside our picnic table and perched on a branch that was almost over my head. I suddenly pictured him trying to pounce onto my hair and my survival instincts finally kicked in. “It’s probably time to go,” I said. “It’s not just myself I don’t trust. That red one has a crazy look in his eyes.” As we walked away, with me unscathed, I wondered if I hadn’t learned my lesson after all.