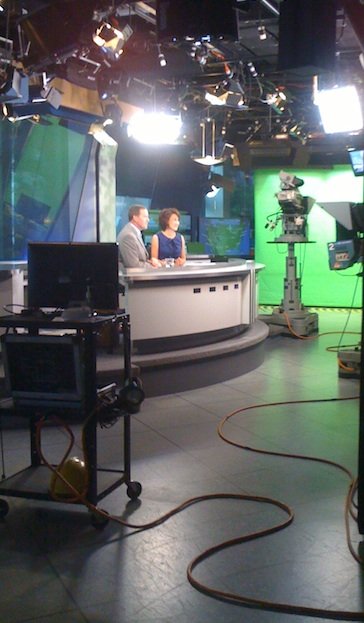 At the NBC San Diego studio

It is possible to be lovingly offensive. The people on all of those intervention shows know what I’m talking about — whether it’s hoarding or alcoholism that’s ruining your life, only those who really truly give a shit are going to drag the afflicted in front of a mirror and make her take a good hard look at herself. Apparently, I am loved. But those closest to me have not been in agreement regarding the management of my particular handicap.

My sister and my spouse have both have been insisting I “step it up a notch” in the fashion department. “Come on, you know it’s the truth,” David would say. “If given the choice, you opt for comfort over style.”

“Why can’t I have both?” I respond. “Where’s it say you only look good if you’re in pain?”

They’ve been saying these things for a few years now, but their fussing over my unfashionable wardrobe had grown louder and more frequent since I began appearing on television. I used to be able to make do with my once a month appearances on NBC San Diego News in the Morning. But now that I also have a weekly gig on NBC’s new channel, California Nonstop, the handful of dressy items in my closet just won’t cut it.

Both David and Jane wanted to be the one to take me shopping; I was beginning to feel like a doll they were fighting over, each of them determined to have the final say over how to dress me. On Saturday afternoon, David and I stopped by Jane’s place on our way out. “We’re going to the mall,” I said. “Want to meet us there for a bit?”

Whether for herself or others, Jane lives to shop. She was once a personal shopper at Nordstrom, and she had been itching to go out and select some items for me. “I could just bring them to you and you can try them on at home, and whatever you don’t like I’ll return,” she offered. Not for the simple fact that she’s Olympic material and thrives on the sport of acquisition. She genuinely wanted to help me.

“The one thing you two agree on is that I’m not doing a good job of dressing myself,” I said.

“It’s not that,” Jane rushed to say before David could — she’s more susceptible to guilt. “I just think you need more color.”

We all agreed on one thing, and that was that I needed to stretch beyond my comfort zone. David and I got to the mall first. After trying on twenty different tops, I ended up with two black jackets and one purple button-down. Then Jane arrived. From inside the dressing room, I could hear them arguing as they raced to select items for me to try on. As clothes appeared, it was easy to guess who’d spotted it on the rack. “Jane, this makes me look like I’m in an aquarium,” I said of one green and blue polyester blouse. “David, no animal prints.”

The saleswoman was at a loss. Every time she offered her help, Jane and David shooed her away. After an exhausting two hours, I found that the overlap between my loved ones’ tastes was the Baby Bear to my Goldilocks. Which is why I was surprised that the one item they’d selected independently was not to my liking. But they were both so happy to have finally agreed on something that I ended up buying the black and white wool jacket. It’s not like I had much of a choice.