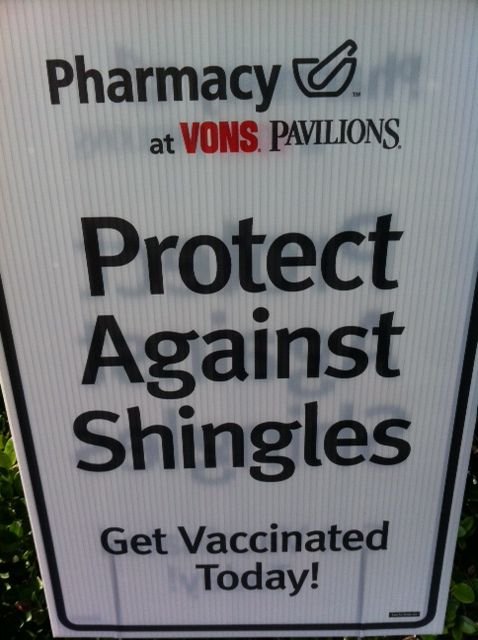 I always thought shingles — the sickness, not the roof tiles — was an old person’s disease. Even the Center for Disease Control recommends vaccines only for people over 60. I vaguely remember my chicken pox experience. I was in 9th grade, and my case was mild — maybe six or seven spots, a few on my leg, one or two on my stomach, another on my back. I was shocked they let me stay home from school for so long for what seemed like a farce of a sickness. Though outwardly I was fine, my spleen (that’s when I learned I had one) had become enlarged, which gave me a free pass from running laps in gym class for a few months. Had I known about all this, I would have tried to get chicken pox much sooner.

Shingles come from the same strain of virus as chicken pox. The official name is herpes zoster, which sounds like a German insult. The year my father turned 60 — just weeks before he was planning to get the vaccine — he came down with shingles, while en route to another country for business. “Wow, that 60 thing is pretty accurate,” I’d told him, after he came home and explained what had happened. Fortunately, despite the pain of the lesion on his back, those weird gaping wounds that are reminiscent of Medieval paintings of the plague didn’t appear anywhere else on his body. “I was relieved no one could see it, but it was a bitch to lean back in my chair,” Dad said.

Despite Dad’s temporary affliction, I wasn’t worried. I had decades before I needed to worry about getting that vaccine. Or so I thought. I was at a party at my friends’ place when I greeted Jordan, one of the hosts. “Jesus, what happened to your face?” I said. “Did you fall off your bike?” I knew he rode a fixed gear, and though my friend was safety conscious and always wore a helmet, accidents happen.

“I still don’t understand how someone young could get that,” I said.

“Doctor said it’s stress.” Jordan had been crunching for his finals; I knew he took school seriously, but hadn’t realized how much it had been weighing on him until I saw it written all over his face.

“Wow. I’m sorry, man, that sucks,” I said. Jordan assured me that the worst was over — the week before, his entire eye had been swollen closed.

I thought it was a freak occurrence for the old person’s disease to strike a young, healthy guy. But a few weeks later, I met up with my friend Claire for a drink. When I asked her how she was doing, Claire said, “Not great. I just found out I have shingles.”

“No, I just have one spot, right here.” Claire pointed to the right of her stomach. “You’d have to touch the blister and then lick your hand or something,” she said.

“What happened? How did you get it?”

“Probably stress,” she said. Claire had been working around the clock — she was sending and receiving emails at 2 a.m. I wondered if it could be the combination of stress and lack of sleep that had taken my friends down.

“That’s terrible,” I said. “What’s the deal? Why are young people I know coming down with this?”

“Apparently we’re not the only ones,” Claire said. She held up her phone and showed me pictures from both the doctor’s office and the pharmacy, each advertising the shingles vaccine.

“There must be some kind of shingles outbreak in San Diego,” I said.

“The worst part about it is that I can’t drink when I’m taking these horse pills.” She held up the bottle. The pills were indeed gigantic, and dark blue. Shingles suddenly seemed even more serious. “Don’t worry, I’m not going to start taking them until tomorrow,” she said. “Right now, I just need a drink.”