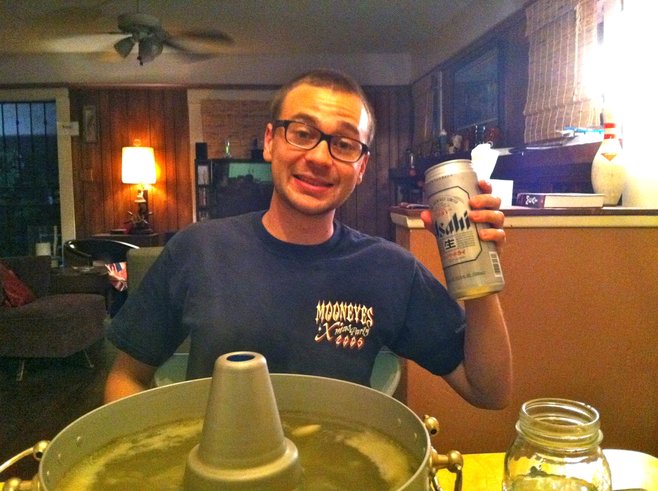 David walked into the room with a lot more flair than usual. He raised his arm high above his head and said, “Isu no ue ni dare ga imasu ka?”

My sister, who was seated to my left, looked at me, then at David, then back at me, and said, “Is he talking shit about me?”

“No, he does that in English – more adjectives,” I said. Jane glared at me.

David searched the ceiling for a moment, then brandished his other arm in a grand sweeping gesture and said, “JANE-san ga imasu!”

Jane didn’t know how to react to David’s sudden urge to perform, in a language she didn’t understand, using her name. She stared at both of us, wide-eyed and frozen. She looked exactly like my neighbor’s cat right after I start my car.

David left to return to his book upstairs, and Jane asked if I was messing with her. “He’s talking about me, he doesn’t want me in the chair, does he. Is this his chair?”

As tempted as I was to fan the flames of her ever-burning distress pyre (she makes it so easy), I chose to reassure my sister. “Don’t worry, he’s just brushing up on his Japanese before we leave.” Jane scrutinized my face, and I could see in hers the moment she decided to believe me, before returning to her own work.

Part of the fun of traveling is in the preparations. Because Japan is more foreign than most other places to which David and I travel, more preparations are necessary. So, to prepare ourselves for a week in Tokyo, we’re doing all things Japanese – we’re reviewing old travel books (from our trip to Japan in 2007), downloading new phrasebook apps, and hitting up every Japanese restaurant and store in the county.

We were pleased with the timing when our friends Jordan and Katie invited us over for shabu-shabu night – Katie got Jordan one of the specialty pots for his birthday. Shabu-shabu is the fondue of Japan, but rather than spear and dip, morsels are grasped in chopsticks and “swish-swished. 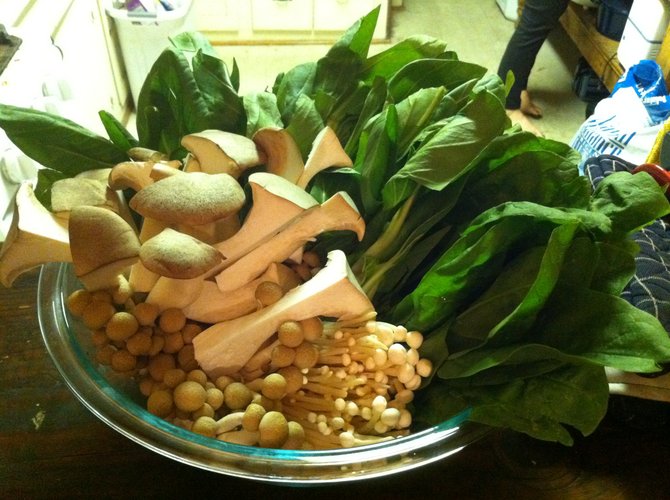 Vegetables for the pot.

I’d never had shabu-shabu before, but after the other night, I’m a fan. We began with simple broth – water and dashi stock with some chunks of ginger and garlic, placed over a fire in the middle of the table and set to boil. Jordan explained that the food we cooked in the boiling liquid would add to its flavor – first thinly sliced bits of pork and beef, then vegetables (spinach, bok choy, several variety of mushrooms), all of which you dip into a tasty sesame-flavored dipping sauce. The last thing to go in are fresh udon noodles, which you add to your bowl with a few ladle scoops of what has, by this time, become a very flavorful broth, and enjoy.

My favorite thing about the entire process is that it stretches the meal and enhances the dining experience. Taking tiny sips of chilled sake, intermittently biting morsels as they cook, allows more time to talk with friends and appreciate the food. Also, unlike my previous fondue experiences (with oil, cheese, chocolate, thick chunks of meat, bread, and fruit), this one didn’t leave me feeling over-stuffed, even though Katie pointed out we were the only friends to help “finish eating all the vegetables.” 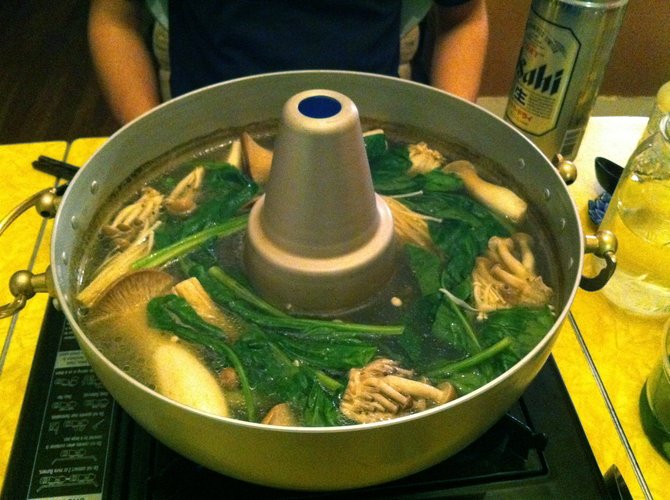 I double-checked one of the apps on my phone and then said, “Kore wa oishii desu! That means ‘this is delicious.’”

“So, you think this time you’ll try shabu-shabu in Japan?” David asked. He tried to get me to enter one of the shabu-shabu joints on our last trip, but I insisted on sticking to food I was comfortable with, like ramen and rice. 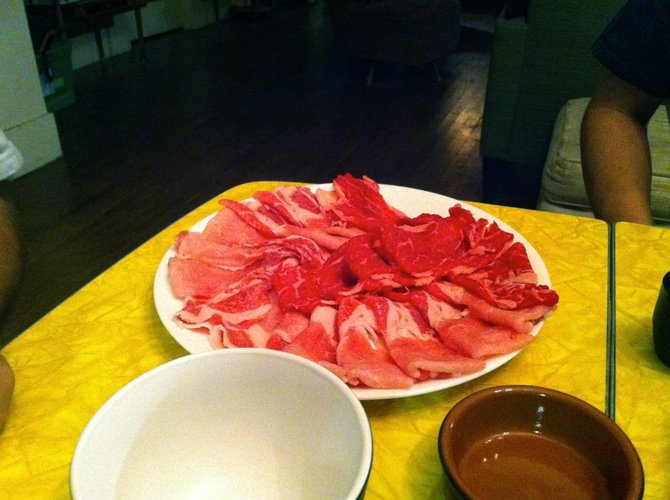 “Hai, shabu-shabu ga suki desu,” I said, and this time it was David’s turn to smile proudly.