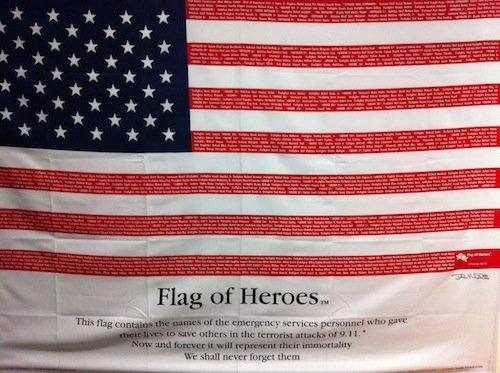 This morning, I interviewed one of our city’s firefighters. I have a lot of respect for firefighters — a number of my high school friends joined the local ranks (at least four I can think of offhand), and three of my cousins in New York were firefighters before I ever graduated high school. One of them, Jeffrey, is no longer with us. Jeffrey was one of the fallen on 9/11, among the first Engine to arrive on the scene, and he never left it. Every time the event is referred to, I can remember exactly how I felt THAT MORNING.

I don’t feel that way every time I encounter firefighters, whether they’re arriving on scene to tend to stupid chicks or dancing on a bar while I auction them off to raise money for the Burn Center.

This morning, prior to my interview, I noticed a flag on the wall of the station office. Seeing where my attention had gone, the man in the room said, “That’s a list of our fallen.” I thought he meant in general, but he then clarified that these were the names of the firefighters lost on 9/11.

I looked for Engine 10, and found Jeffrey’s name. “That’s my cousin,” I said.