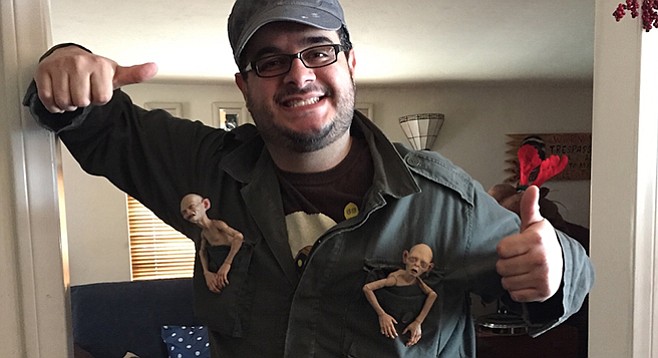 Everyone knows that geek is chic and nerds are neat, so occasionally I like to humblebrag by referring to myself as one or the other. Sure, I’m super into Doctor Who and anything Joss Whedon touches, but when I set foot into my friend Beth’s house, it was immediately apparent that I had light years to go before I earned any real geek cred.

There was no shelf, no wall, no corner of Beth’s house that was not adorned with sci-fi, horror, or fantasy-related posters, movie props, figurines, or tchotchkes. Because it was December, an overwhelming number of artifacts were holiday-related, such as the Nightmare Before Christmas statuettes, and the bookshelf topped with toy characters from the stop-motion classic, Rudolph the Red-Nosed Reindeer. As another friend put it, even Beth’s “hearth was Hoth” — meaning every square inch of the mantle over her fireplace was filled withStar Wars figurines specific to Hoth, the snow-covered planet in the Star Wars universe. Instead of an angel topping her Christmas tree, there was a hang-gliding Ewok, and the branches below were festooned with tiny Stormtroopers.

Even the reason we’d been invited was geeky: Beth was hosting her 4th Annual Lord of the Rings Marathon and Hobbit Meals event at her home, which, for the sake of the day, would be referred to as the Black Gate of Mordor. The only time I’d seen The Fellowship of the Ring (the first film in the trilogy) was when it was released in 2001; I saw the second, The Two Towers when it came out in 2002; and I think I rented the third, The Return of the King, some time in 2004. I was at a clear disadvantage. I made a mental note to smile and nod each time someone said something that could potentially be a quote or reference.

The original theatrical versions of each installment of the trilogy were notoriously long, but this was an advanced film geek affair, so when David and I arrived at 8 a.m. on a Sunday morning, we were settling in to watch all three extended versions, the total running time of which is 726 minutes, or just over 12 hours. The first thing I did was stake out my seat.

But relentless movie watching was only one half of the endurance test; this was also a Hobbit-meal marathon. Apparently, in J.R.R. Tolkien’s novels, the Hobbits had six meals a day. Add in the extra one that was included in the movies and dessert (for fun), and we were squaring off against eight separate meals. Over the years, Beth had honed her menu. Originally, she served full, normal-human meals for every Hobbit meal. “Everyone was in a food coma by Elevenses,” she said. After that, she adjusted the menu so that each meal, spaced about two hours apart, was more like a course. Like Hobbits, we would graze throughout the day to keep our energy up, and ensure that we wouldn’t get too full.

All of the dishes came from a Middle-Earth Recipes website, created and maintained by even more die-hard foodie/Tolkein fans. Miguel, one of Beth’s 20 guests, had created a hand-drawn and watercolor-painted menu for the occasion. The house smelled of simmering meat and onions, and the rich sweetness of baking cakes and breads.

We began with coffee and “Breakfast Scones for Mr. Frodo,” and then settled down to watch the first movie. An hour later, the Hobbits had barely left the Shire when Beth announced loudly that Second Breakfast (French toast with bacon and sausage) was ready. I was shocked when Elevenses came around (Dwarven women’s pumpkin cake and Elven bread), because it was our third meal, and we were still only on the first movie.

Beth had insisted that people wear pajamas, or at least comfortable clothes, which was another tip she’d gleaned from the first year. Many people took her up on it; the rest, including David, were sporting T-shirts that revealed their individual geekiness. Miguel’s shirt depicted the logo for the Bureau for Paranormal Research and Defense (B.P.R.D., the organization for which Dark Horse Comics’ Hellboy works). One older gentleman was simply dressed as Bilbo Baggins, with a red vest and loose patchwork pants, his jowls completed with carefully manicured muttonchops, as if to convey that this was a daily look for him. David was double representing with his Despicable Me and Doctor Who crossover shirt featuring mirthful Minions making away with the TARDIS. Around noon, during the short break between the first and second movie, people mingled a bit. Most introductions were followed up with the question, “How do you know Beth?” I’d assumed many of them worked together in film (creating, screening, and reviewing movies, like our host) but most of these people were from one of the many fan groups to which Beth belongs. My favorite answer came from the man in the simple red sweatshirt with the British accent. “I run a group called the California Association of Pop-culture Enthusiasts, or CAPE,” he said. He was justifiably proud of himself for making the superhero-themed acronym work.

An hour into the second film, the “dark time” (the longest stretch between two meals) ended, and we feasted on three different kinds of soup with soda bread. A few of us succumbed to dozing during the second movie. Sleepy and full, I skipped the breads and cakes served at Afternoon Tea. We were finally on the third film when Dinner (Balin’s spiced beef and Taters Boulangere) was served. Supper was the heartiest, with bacon-wrapped pork, two meat and veggie potato pies, and Mushrooms à la Gandalf (stirred until they’re black using a giant staff). I didn’t even try to taste dessert — all those cakes and cookies — because by that time, nearly 10 p.m., after three movies long enough to have been six, and more Hobbit food than I could keep track of (including some specialty brews), I was ready for bed.

Every year, exhausted from her days of planning and cooking, Beth claims she’ll never host the event again. But now that I’ve got the hang of it, I’m already looking forward to next year. As Tolkein wrote, and I know this because it was on the invitation, “If more of us valued food and cheer and song above hoarded gold, it would be a merrier world.” Even wannabe geeks like me can raise a glass of the Elven-made miruvor to that.