Royal pain in the wedding 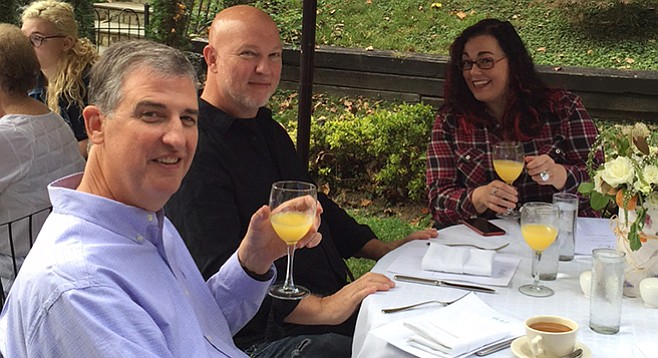 To say I was pleased we were the first to arrive would be an understatement. It wasn’t until my cheeks began to ache that I realized how hard I’d been grinning. It made sense, my smile — things had worked out according to plan, which meant that there was some order in the world. I like order.

I scanned the tables on the patio and, after some consideration, placed my purse on what I deemed to be the optimal seat. Set with its back against the line of grass, this chair would grant me a comfortable view of the entire party. It was also located directly beneath the sole umbrella.

By the time the next guests appeared, I was relaxing with a mimosa in hand, along with David, his brother Dana, and Dana’s daughter Becca, those who chose to ride with me. The rest of the family was still back at Robin’s, the house in which all eight of us (nine, if you count our hostess) were staying for the wedding weekend.

As experienced through the eyes of one small corner of the party, the Fokos Family (namely, David and Barbarella)

David referred to it as the family’s “royal wedding.” It was a fair description. There were 10 bridesmaids, 10 groomsmen, and 200 guests, some of whom traveled from Australia. There were also two outdoor tents; though, calling them tents is like calling American Pharoah a horse. The bride, who descends from Eastern European aristocracy, looked like Sleeping Beauty’s Princess Aurora, with her long blond hair and tall, slender form. She’s from the side of David’s family that comes with painted portraits of ancestors, a coat of arms, and a family tree dating back to the early 1600s.

The wedding was just one of several events scheduled to take place over three days. There was a greeting party on Friday night, when a hundred or so people gathered at the Gibson in Washington DC On Saturday, the ceremony and reception were held at the bride’s parents’ home in Potomac. And Sunday, there were two brunches (one downtown; the other, where I sat with my mimosa, in Potomac), and then a barbecue at a family member’s farm, just a 45-minute drive away in Maryland’s horse country.

As the date approached, my anxiety mounted. I wasn’t worried about the wedding; that would be fine and lovely. My apprehension was focused on the family, particularly the stress of dealing with a large group of individuals who each had their own idea about how things should be done. In short, I feared having no control.

Before the greeting party at the Gibson, our immediate family (David, his siblings, niece, parents, aunt, and cousin-in-law Robin) would be having dinner at a restaurant. There had been talk of taking the metro into town. “I just don’t want to be trapped,” I said to David as we were dressing for dinner. I had some minor pushback from others when I shared my plan to go back to the house, change, and then take an Uber. Some wondered why I wouldn’t just wear one outfit for the evening. Others pointed out that the restaurant was closer to the bar, and still another added that everyone else was taking the metro, and why wouldn’t I want to go with everyone else?

“I can’t believe this is only just occurring to me, but I think I’ve pinpointed the root of every family issue,” I said. “Every single conflict can be boiled down into one underlying problem, and that’s one person in the family not being happy with another person’s choices. It’s that whole, ‘gap between expectation and reality’ thing. Whether it’s a hobby, or what they do for a living, who they date, or what they choose to believe in. Everyone wants everyone else to make the same choices they do, and when others choose differently, there’s disappointment, and that disappointment breeds discord.”

I applied my new philosophy to the situation at hand. “Everyone has an opinion about how and when I should get to the Gibson, and they all think theirs is the best,” I said. “You know what? I have this car for the weekend. I’m happy to give rides to whoever needs one, so long as I get to come and go when I want to come and go.” Because David knows that few things stress me out as much as being late or feeling cornered by someone else’s schedule, he agreed that my plan was good for staving off anxiety.

And it worked. The weekend was stress-free (for me, at least), and the wedding was as perfect and magical as a fairy-tale ending. The brunch we chose to attend had been scheduled for noon on Sunday, at a place about 15 minutes away from Robin’s. The venue was unknown to me, and unknowns make me nervous. It puts me at ease to have a little buffer, a bit of extra time to scout and adjust. When the family gathered for coffee that morning, I announced, “I’ll be leaving at 11:30. Anyone who wants to ride with me is welcome.”

At 12:10, when David’s parents, aunt, and sister arrived, I was on my second mimosa. When the clouds dissipated and the sun beat down on the patio, those who hadn’t thought to bring sunglasses squinted uncomfortably; some formed their hands into makeshift visors. I leaned over to Becca, who shared my shade from the umbrella over our table and said, “Aren’t you glad you came with me?” She was. Thirty minutes later, the clouds returned and grew dark, and then the sky opened. People abandoned their food and rushed to gather beneath the overhang by the bar. Becca and I remained in our seats, dry, thanks to the umbrella, and continued to sip until the downpour ended.

“You know, lots of people tell me I’m too uptight about time,” I said to my 21-year-old niece. “But you know what?” I gestured around us and smiled. “It pays to be early.” Becca nodded in agreement as we clinked glasses.