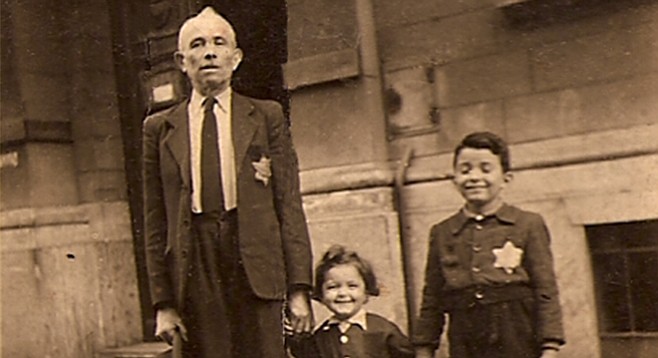 Last summer, my father-in-law almost died. In fact, he did die, but that’s only if you want to get technical about it. He flatlined while in the hospital and was revived for the price of a few bruises and broken ribs. He was not happy about being resurrected, at least not at first. For weeks, it was clear some other part of him still needed to be resuscitated. On the phone, his voice was desolate. He said things like, “I wish they hadn’t brought me back.” He took measures to make sure it wouldn’t happen again.

Eventually, he was moved from a giant institutional hospital in Boston to the one on Martha’s Vineyard, which was less frenetic and closer to home. My sister-in-law, Michelle, left her home in Seattle for an extended visit to the island where her parents lived. She became her father’s medical advocate — communicating with doctors and nurses, parsing hospital system changes for her distraught mother and her medication-fogged father. My military dad would say Michelle was the one “on the ground,” fighting the battle for understanding and assistance on the front lines while we received updates from afar.

After two months of daily emotional yo-yoing, everyone seemed to be steeling themselves for the worst. At that time, David and I had begun packing for our summer sojourn to the island, the one of our two annual visits that always coincides with an exhibition of David’s art at the Granary Gallery. “We should pack something black and…appropriate,” David said, his face solemn. I didn’t need to ask why.

The week before our flight, I overheard David having what was, for me, a memorable conversation with his father over the phone. Both David and Robert are what I call “matter-of-fact” men. They approach every situation with Spock-like logic, never shying away from hard truths. When it comes to differences of opinion, they are both patient and Socratic. What they are not — at least not that I’ve witnessed — is sappy. Some things, such as love and mutual respect, are simply understood, without the need to get all wordy about it. But in this conversation, as I listened to my husband pause and pivot, searching for the right words, it was evident that he wanted there to be no mistake, no misunderstandings — he wanted his dad to know just how he felt.

David remained as matter-of-fact as possible as he told Robert what a great father he had been, and he detailed many of the ways in which Robert’s examples and advice had influenced David for the better. Robert’s voice cracked with emotion as he said, “I cannot tell you how good that feels.” In a rare moment of emotional earnestness, David added, “I can’t tell you enough,” and Robert responded, “You just did.”

By the time David got off the phone, I was a mess. So, this was what “preparing” looked like. Meanwhile, Michelle had been working on preparations of a different kind. In many ways, she was Robert’s saving grace, as she toiled to bring him healing for the kind of ailment no doctor could treat. That is, except one. Michelle told us that one of Robert’s attending physicians, Dr. Glassman, wore a yarmulke.

Robert, who grew up in Hungary, is a Holocaust survivor. He never talked about his experience to his children as they were growing up and had agreed with his wife that she would raise them in her Lutheran faith. David says he’s seen the photo of his father as a young boy, with a Star of David embroidered on his jacket. It was framed in a collage along with other family photos. “It wasn’t hidden, or a nonissue,” David told me after I’d expressed shock that he could have noticed this photo growing up, without thinking to ask about it. “It just never came up. Obviously, as kids we didn’t know the story, and if you don’t know the story, you don’t know how extraordinary, how incredible, how…horrible it is,” he said. “Michelle’s the one who decided it was a really big deal and pushed. As it turns out, for the better.”

I was in the room the first time David heard some of those stories — Robert spoke of his father being taken away and sent to forced-labor camps. He described his confusion and fear of being moved to the ghetto, and then watching, without understanding why, as neighbors were lined up, beaten with the butts of rifles, and marched away. It was only five years ago that Michelle sat down with her father and, with a tape recorder in hand, prompted him to recount it all.

Robert was nine years old when the war ended, after which his family name was changed from Fried to Fokos (the Hungarian word for a shepherd’s axe) by the Hungarian government. In the Jewish faith, boys go through a rite of passage by becoming a bar mitzvah, or agents of the Jewish law, at age 13. In his eyes, even though he was 77 years old, Robert was not yet a man. As he tells his story, he says, “I was worried that if I died, I wouldn’t die as a Jewish man because I was never a bar mitzvah.”

Michelle had arranged for Dr. Glassman, who is an Orthodox Jew, to perform a bar mitzvah for Robert in his hospital room. To me, having grown up Catholic, the ceremony seemed a sort of last rites. But rather than easing him into the final sleep, the process of becoming a bar mitzvah woke Robert from a nightmare that no one but he and Michelle realized he’d been having. When David and I spoke to him afterward, Robert’s voice had a new, buoyant quality. A week before, he had been telling us about a bottomless pit of emptiness, but now he described fulfillment of a kind he’d never known. It wasn’t just his mood that improved — Robert’s breathing was suddenly better, his strength was returning, and for the first time in many weeks, he had an appetite.

Now, nearly a year after he “died,” Robert, in some ways, seems more alive than he’s been in a long, long time.