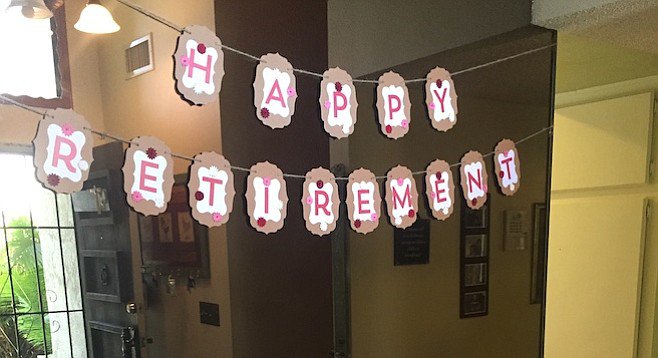 After a few years of hemming and hawing, my mother suddenly announced she’d be retiring at the end of the month. This elicited the same question, over and over, from family and friends: “What are you going to do now?” Now, meaning “the rest of your life,” or at least “most weekdays of your foreseeable future.” Mom’s standard answer contained some variations but usually included spending more time with her grandkids, becoming a notary, knitting, and taking a quilting class.

The first time I asked her, Mom responded, “I could come work for you.” She said this in a taunting tone of voice that playfully twisted the suggestion into a threat. The corners of her lips were upturned in a smile, but the sparkle in her penetrating eyes disclosed the dare. “Sure you could,” I said in the same joking tone. But while I laughed, Mom held her smile, along with her probing gaze.

When Mom “joked” about working for me the second time, I called her bluff. “Don’t say it if you don’t mean it, because I could really use some help,” I said. Instead of the “gotcha” laugh I expected, Mom’s face lit up. She suggested tasks she could take on, such as scheduling my calendar and organizing and responding to my emails. In my cynicism, I assumed she was feigning enthusiasm as part of a long con. But a few days later, at her office retirement ceremony, I heard her respond to a coworker’s version of the “what now?” question with a new variation: “I’m going to be spending more time with my grandkids, probably become a notary, and working with my daughter Barb.”

My mom with coworkers at her retirement party

It wasn’t until I heard her tell other people — people who weren’t in the family and therefore would not have been “in on the joke” — that it occurred to me that Mom was serious, and that her initial tone might have been some sort of protective mechanism — a safe way to feel me out, to see if I’d be open to the idea, while still leaving herself an out in case I reacted negatively.

In countless ways, my mother has always been working for me, from whipping up a Halloween costume because I made a last-minute decision that I needed to dress up for school, to staying up past midnight typing and binding a book report I’d waited till the 11th hour to begin. And later, when I was in my early 20s and lived in a different city, Mom never failed to call and wake me in the morning because she knew I didn’t trust my alarm clock. The only reason she ever got a “real job” — after being a Navy housewife for 18 years — was because, as a mother of four girls, she had spent so much time ingratiating herself with the administration and immersing herself in the daily operations of our schools. After my dad managed to get restationed in San Diego, Mom started volunteering in the office of the high school from which all four of her daughters would graduate. Her responsibilities steadily increased, and one day, a school official said, “Maria, you’re here all the time. Why don’t you just get a job?” For the past 17 years, Mom was the executive assistant to the superintendent of Coronado Unified School District, where she earned the nickname Queen Mother. Nothing fazed the Brooklyn born-and-bred “mutha.” She had a reputation for being both a fierce gatekeeper who took no shit, and a loyal ally who got shit done. More than anything, she was a caretaker. As one elected official put it, Mom would simultaneously groom and assist boardmembers: “She’d say, ‘Here’re the things you want to know, and here’re the things you need to know.’” Her send-off was like her reign: some tears, but more laughter.

Unlike most of my friends, I never worked in food or retail — my first job was in an office, assisting my mother and other admins at the Sweetwater Union High School District. At home, I was a sulking teen, but at the office, I did what my mother told me to do. Even Mom’s “bosses” did what she said because they always knew she had their best interest in mind.

I watched my mother’s final school-board meeting on public access and heard members of the board and community look back upon her impressive career. Last week, I listened to similar sentiments being expressed by the friends and coworkers at her retirement party. After the last guest left, I said, “I’m pretty sure I can’t afford you.” Slipping into a faux-Brooklyn accent, I added, “You still wanna help me out if I ain’t got no moolah for you?”

“All I want is a cup of coffee, I don’t want to get paid,” Mom said, but in her genuine accent, so the word sounded more like koa-fee.

“It’s not like you’re available anyway; Heather’s got you booked,” I said. Between my three sisters and their combined six children, all out of school for the summer, Mom’s calendar was packed: babysitting, attending games, and chauffeuring the kids to and from their activities (soccer, singing lessons, etc.) from Chula Vista to San Marcos.

“True, July is a tough month,” Mom said. “But after that, maybe I could come over, like, two times a week, just to look and see if I can be of value. I’m looking for variety, and I think working with you would be interesting and keep my mind stimulated and get me out of the house.”

It took me a moment to realize that the Queen Mother was doing what she did best: making me think that her helping me was really me helping her. Next time someone asks her what she’s going to do now that she’s retired, I’ll encourage Mom to respond with the truth: “I’m going to do what I’ve always done, from home to the office and back again. I’m going to mother.”