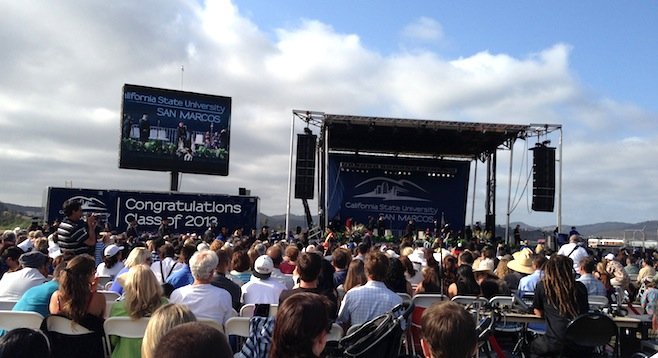 It had been cold and cloudy when I’d dressed that morning, and the commencement ceremony wasn’t scheduled to begin until 4:30 p.m.; it never occurred to me that I might find myself trapped for over three hours beneath an inescapable, blazing sun.

I’m not sure why I expected shade at an outdoor event. There hadn’t been any at my high school graduation – my fellow graduates and I had been situated in the middle of a football field, where we broiled in our black gowns during a series of speeches we could barely hear while our families watched on from the cement stadium seats at Southwestern College. (Bonita Vista High School wasn’t big enough to accommodate its students and their families; apparently, it still isn’t — this year’s commencement is being held in the aptly named “Sleep Train Amphitheatre.”)

When I think back on my commencement, I am left with two distinct impressions: boredom and discomfort. We didn’t have iPhones back then, so there was no texting or tweeting or Facebooking my way through the monotonous procession of names being mispronounced. Hence, the boredom. The discomfort had to do with being stuck in the blazing sun (I’m a flower, I wilt) and the tortillas I had plastered against my skin, underneath my bra.

The administration had threatened to de-diploma anyone found with a beach ball, so we students conspired to smuggle tortillas under our clothes that we would unearth and toss into the air at the end of the proceedings. I don’t remember why it had to be tortillas, but I was glad to have something to throw other than my cap — for some reason, I thought I’d want to hold on to that thing for the rest of my life. I think it may have ended up at the bottom of a box in my mother’s garage.

Mom sat one chair over to my right. The folding chair between us was empty, because my nephew Liam was underneath it, taking refuge from the sun. At least, that was the popular excuse — we knew he didn’t care about the avoiding the sun so much as being able to clearly see whatever game he was playing on my mother’s iPad. Brian, under the seat to my left, was using Heather’s iPad. His mother wouldn’t miss it — she was many rows ahead on the giant, flat grassy area, beyond our field of vision, waiting for her name to be called so she could receive the hood that is bestowed upon one who has earned a master’s degree in education. 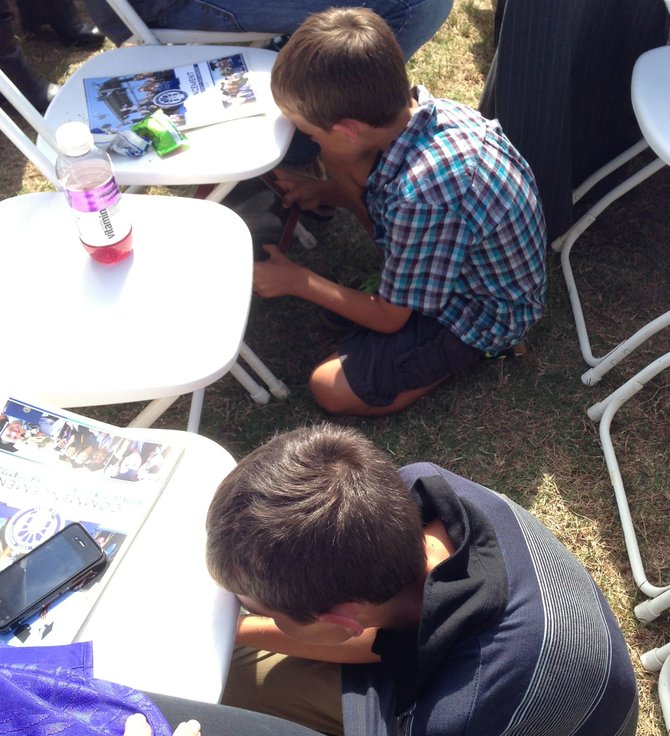 My nephews attempt to escape the sun and the boredom

I dabbled with college, but I never made it anywhere near an associate’s degree, let alone a master’s. I was an extreme student: I saw as many A’s as I did F’s but rarely a letter between. I excelled at what interested me most and got brain-freeze when confronted with any subject matter I found either boring or baffling. In the end, the frustration and stress over those subjects I didn’t care for (but was forced to take) won out over any sense of accomplishment I got from the courses I enjoyed. One day, I just stopped showing up and immense relief ensued.

My sister Heather had a different relationship with academia. She maintained a high GPA at Bonita Vista and aced her SATs (I stayed up all night prior to mine, and then groggily colored in random circles). Heather graduated from UCSD four years later, and went right back into the school system as a high school English teacher. Now, she was about to achieve her master’s degree in only two years (rather than the usual three), just in time to assume her new position as assistant principal.

“Boys, pay attention,” Sean said to his sons as the first speaker took the stage. 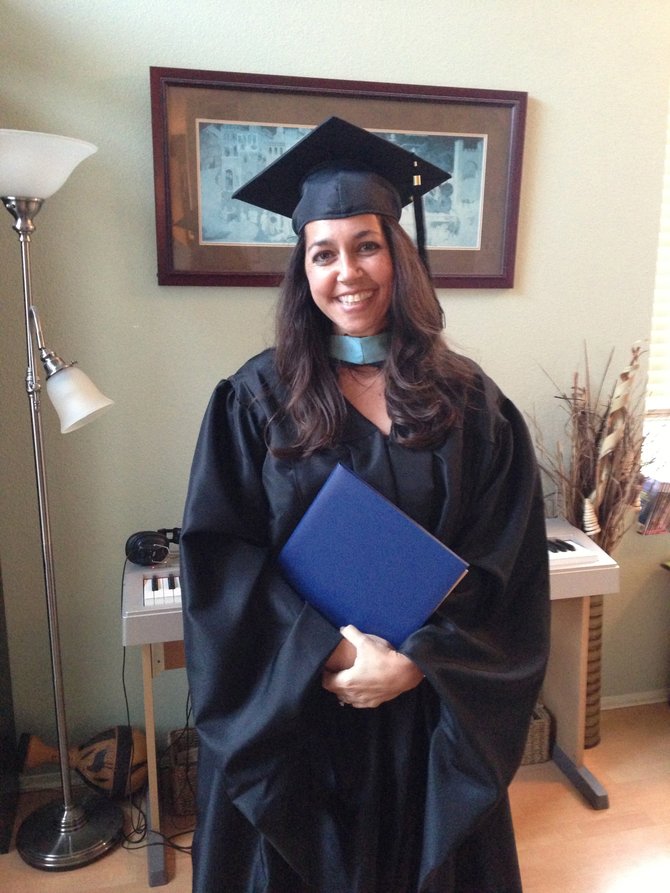 A giant screen displayed tight shots of the capped and gowned. The woman beside my mother apparently thought the screen was some kind of magical communication device. When her son’s face appeared, she jumped up and down and screamed so loud that the entire section put their fingers in their ears. Then, just to confirm what we already suspected, the lack-witted woman actually waved at the goddamn screen. I rolled my eyes, but my nephews were more verbal. “Stop screaming,” Brian demanded quietly, so only I could hear, perhaps hoping I’d pass it on. Liam just looked up at me with irritation in his ocean-blue eyes and said, “Oh. My. God.”

After a few short but sweet speeches, I passed the time by imagining what it would have cost for a private ceremony just for my sister — one that didn’t involve all these other people. The tortuous woman beside us was but one of many. It wasn’t long before it became painfully obvious that a few groups had shirked the rules and snuck in noisemakers.

Heather’s name was called fairly early. For a minute and a half — from the time she stepped onto the stage, appeared on the big screen, and made her way off stage — the clamorous throngs, the harsh sun, that awful shrieking woman: they all faded into the background, and all I could think was, That’s my sister up there, this is her moment, she’s being recognized for all her hard work. I shared smiles with Sean, who was beaming at his wife’s accomplishment, and my mother, who had been encouraging us all to cheer insanely, but in the end, joined us in our feeble, self-conscious, “Yay!”

As the ceremony drew to an end, the crowd grew incrementally louder. I started to panic about the maelstrom ahead, when the masses would all stand at once and rush to find their graduate. Fortunately, I had a reason to hustle away — David was meeting us back at the house for dinner. I told Sean I was heading out. I apologized my way around people’s knees. At the end of the row, I said, “Can somebody please, like, move her back a little?” and gestured with a forced, hold it together just a few more minutes, psychotic smile at the old woman in a wheelchair — the last obstacle in the way of my freedom.

Like an action star barely escaping a spectacular blast, I cleared the field, and the explosion of cheering behind me seemed to push me the last few steps toward the sweet, quiet solitude of the street. Cloud cover brought relief. I breathed in the cool air and began walking toward my sister’s house. Noting my ringing ears, I hoped that by the time any of my niephlings were old enough to graduate, I’d either be deaf or remember to bring earplugs.