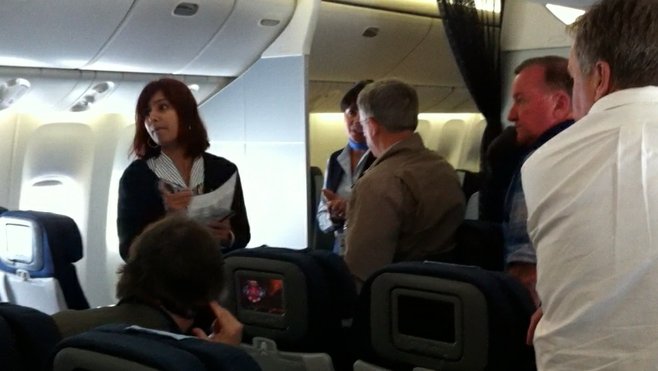 I’ve logged enough miles in the air to know that no flight is a go until those wheels leave the ground. This is why I was mildly disappointed but not terribly surprised when, after we’d been taxiing toward the runway for several minutes, the captain made the announcement that we had to return to the gate. Someone in the crew had “heard a noise,” and they needed to double check the cargo hold to make sure everything was securely stowed.

David and I rolled our eyes at each other. The man in the seat behind me complained to the woman next to him about how the change of aircraft messed up his seat selection. Seemed he wasn’t the only one – three women, all of whom were in middle seats, had to be told more than once by stern stewards to return to their original seats after they were spotted trying to snag one of the two available aisle seats. Three women, two seats, eleven hours of sitting ahead of them: it was the tensest version of musical chairs I’d ever witnessed.

After negotiating with each other and arguing with a testy flight attendant, two women won out over the reticent third and triumphantly situated themselves in aisle seats.

With that entertainment at an end, I pressed a button to continue watching Captain America, which I’d started when we’d begun taxiing. It was terrible. Endless dry dialogue, disjointed action sequences; it was more torturous than sitting still on the tarmac for the two hours it took me to watch it. The captain and various flight attendants speaking either English or Japanese repeatedly interrupted the sound feed. “Everything’s secure now folks, but we burned a lot of fuel, so now we’re working on getting more before we can take off.”

That was an hour into the movie. I pulled out my earplugs and just let the dreck on the tiny screen run while I checked in with David. His left leg had begun to cramp. Commotion two rows ahead caught our attention – three flight attendants were swiveling their heads back and forth between the numbers on the rows and the papers in their hands. Passengers were standing, and had gathered in an irritated-looking mass around the attendants.

The complainer behind me was up there, pretending to stretch. “What’s going on?” I asked when he walked by me on his way back to his seat.

“They’re clearing out those two rows,” he said. “They said there’s a weight distribution problem.” He went on to chide them, and to piss and moan about fat people, though all of the people in those two rows were of average height and weight (save for one very tall, but very slender gentleman).

David and I shared a bewildered look. I was the first to speak. “Weight distribution? On a plane this big?”

“Doesn’t make sense,” David said. “Maybe on a puddle jumper, but not a 777. If you have to move people around to distribute weight evenly on a piece of equipment this large, that would make me nervous.”

We were still grounded, so I was able to get online with my iPhone. A few minutes later, I said, “They’re lying to us. I don’t know what it is, but it’s definitely not weight distribution.” I stopped talking to watch the pandemonium to my left. What the flight attendant giveth, the flight attendant taketh away: the two women who’d been granted aisle seats were now told to scoot back to their original middle seats so that those being displaced from the rows ahead could take up the aisle seats. How cruel, I thought, remembering the time David and I were bumped to first class just to be told, minutes before take-off, that the original passengers had arrived and we’d have to return to economy, our heads hanging down in disappointment as we avoided the smug schadenfreude-tinged glances from everyone we passed on our way to the back of the plane.

“It’s bullshit, I’m telling you,” I said to David once every one around us was seated. “Check this out – the plane alone weighs 300,000 pounds and the maximum takeoff weight is around 650,000 pounds.”

“That means the weight of those people they moved, even if I’m averaging way up, is three-tenths of one percent the total weight,” David said. “That shouldn’t make a difference at all.”

“I know, that’s what I’m saying,” I said. “They’re lying to us. I have no idea what the real reason is for this endless delay, but it’s not what they’re saying. Listen – in an interview with Executive Travel, this pilot Chris Cooke said he logged over 4,500 hours as both captain and first officer, and he can count on one hand the times he received a request from load planners to shift people around. He said, ‘On those few occasions, it was a nearly empty flight’ – this one’s almost full. And he says that as the jets get larger, ‘passenger weight distribution is even less critical.’ When he flew flights this size, he says he was never asked to adjust seating locations due to weight.”

Flight attendants began to pass around water, and then one made an announcement that usually signals an impending cancellation: “If you’d like to get off the plane to walk around, it’s okay to do so, just be sure to take all of your possessions with you.” At this, David and I shared a doomed expression.

I was about to call the airline and get in line for the next available flight when a different flight attendant made another announcement, not five minutes after the last one: “Please return to your seats, everyone, so that we can take off.”

“Are you kidding me?” I looked at David, whose face conveyed the distress I was feeling. I was vaguely aware of the credits to Captain America rolling in front of me.

“These people have no idea what the hell they’re doing,” David said.

“Maybe they were trying to get rid of people,” I said. “Or they wanted some excuse to keep people from arguing over aisle seats. It just doesn’t add up,” I said.

David shrugged and adjusted his leg with a pained expression. “This is going to be a long flight.”