Pickled on a pickle (with Hendrick’s Gin) 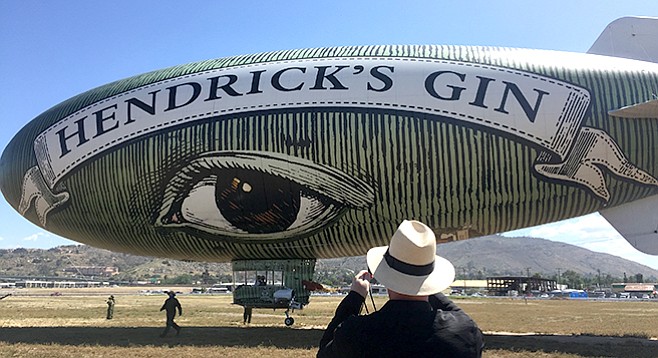 A path of rose petals led us to the waiting area. Fresh croissants and an assortment of pastries and colorful cookies, along with porcelain teapots, cucumbers, and red roses were spread out on tiny wooden tables and a coffee table made from late-19th-century suitcases and travel trunks. A tufted, rose-colored velvet and wood sofa was flanked by embroidered velvet and wood chairs, all of the same Victorian style. Facing the sofa, on the other side of the suitcase-table, was a bar made from ancient-looking valises and portmanteaus. A Persian rug tied everything together, so that the area looked just like a room, only this room had no walls, and in lieu of lighting, there was the bright morning sun.

It was 9:30 a.m. on a Monday, and David and I were standing in the middle of Gillespie Field, an expanse of flat, weed-speckled dirt that serves as a public airport. A bartender in a khaki ensemble of slacks, short-sleeved button-down, vest, and straw fedora handled me a gin-based cocktail on the rocks, garnished with a fresh basil leaf. In the distance we could see our ride, a giant dirigible designed to look like a cucumber with a whale-sized eye painted on the side.

“What’s the word I’m looking for,” I said while staring absently at the rim of David’s Panama hat. “Delightfully absurd? Wait. Bizarre?” I quickly tapped the word into my dictionary app and confirmed, “Yeah, that’s it. Bizarre: strange and unusual in an interesting or amusing way.”

A Ride in the Flying Cucumber: CLICK IMAGE FOR VIDEO

The Flying Cucumber, which is the name of the long green dirigible, belongs to the people who make Hendrick’s Gin. The abundance of cucumbers and roses around us represented the spirit’s signature infusions. The hilarious sky-leviathan was launching from San Diego to embark on a 44-day cucumber-centric journey that will culminate on Cucumber Day in New York City.

I was informed by one of the blimp’s pilots — a South African man who’s been operating helium-filled airships for over two decades — that outside of Germany, there is nowhere in the world where you can buy a ticket to ride in a blimp. Even Goodyear is invitation-only. I took a moment to appreciate my good fortune and silently thanked myself for taking the time to post so many cocktail pics on Instagram and Twitter, which alerted the good people in Hendrick’s New York office to the fact that I was just the sort of lush who would enjoy day-drinking in a big ol’ balloon.

David and I were loaded up with flasks containing a cocktail called the Lady Grace Drummond-Hay, after the first woman to travel around the world in a Zeppelin. Lady Grace was a British journalist. She was born in Liverpool in 1895 and died in Manhattan, of heart disease, 50 years later. We were also given barf bags, euphemistically dubbed “regurgitation receptacles,” but I was confident I wouldn’t need that — my air legs have always been as good as my sea legs.

As six men held the floating beast in place with long ropes, we boarded its belly. It was just me, David, Caesar the pilot, and our trusty, Lady Grace–filled flasks. The men on the ground let go of the ropes, Caesar pushed some buttons and turned the wheels on each side of his seat, and we were soon soaring 1000 feet above terra firma at 30 miles per hour.

I had no idea how loud the sky was — we had to wear headsets to communicate with each other. David and Caesar talked tech and specs. David’s interested in that sort of thing, such as how the blimp’s shape was sustained only by the pressure of the gas within, and that an air bladder has to be vented as the craft gains altitude and the helium expands. I half-listened to them while I sipped the chilled drink from my flask and took in the view, which, save for the impressive number of pools below, was less than spectacular. Drinking in a blimp and texting

The ride was silky smooth in the way that only a colossal, lighter-than-air cucumber can provide. The highlight of my ride was when my sister Jenny texted me. It was a simple greeting: “Yo. That’s it.” That’s her way of saying, “I’m thinking of you.” I responded with a selfie of myself holding up the flask, along with the message, “Can’t talk, drinking in a blimp.”

Landing was particularly riveting. We nose-dived toward the ground, and men ran toward us to catch the dangling ropes. But then they walked us sideways across the field, and we occasionally bumped the ground. It reminded me of the floating house in the movie Up, as it was dragged along by an old man and a little boy on the adventure of their lifetimes.

After our flight we stopped for lunch at D.Z. Akins. I think the cucumber triggered a subliminal correlation with the big containers of pickles I remembered were on each table at the diner. Still basking in our farcical excursion, I said, “I don’t understand why blimps aren’t a thing.”

“That ferry that brought us to Catalina only goes 35 miles per hour. Blimps could be the boats of the sky — they’re way smoother than boats in the water. It would be a nice way to travel. I mean, if you had a team of people ready to catch you wherever you ended up.”

“They used to fly across the ocean,” David said. “Remember, in Indiana Jones? There were big passenger blimps like that. Wow, what a great way to travel that would be.”

“Right, that would be way better, with restrooms, cabins, and a dining area,” I said. “Much more civilized.” The lack of a toilet on The Flying Cucumber must be one of the reasons the rides are so short (ours was under 30 minutes).

“Well, this flight has only whet my appetite for more airborne experiences,” I said. “You know, I’ve never been in a hot air balloon, and they’ve got a field in Del Mar, by the ocean. Imagine the view.”

With a smile that indicated he would consider it, David said, “I hear you can drink champagne on those things.”