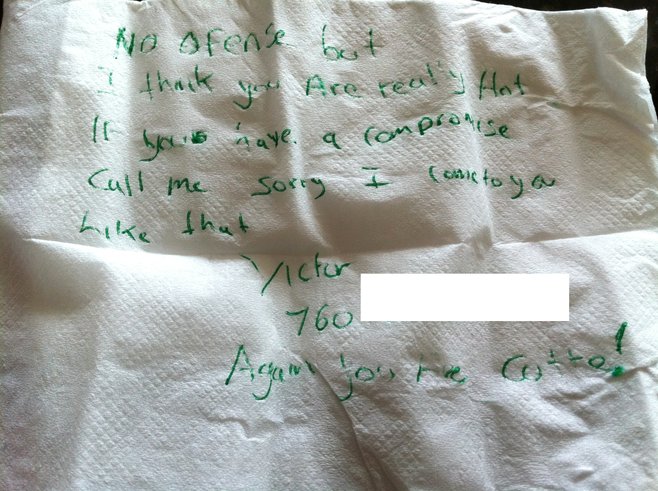 When it comes to finding love, look no further than the Money Pit in San Marcos. That’s where I was yesterday when Cupid, forgetting for a cherubic moment that I was already taken, shot some poor soul with an arrow and then pointed him in my direction.

I was with a big group — my mother, my sister Heather, her husband Sean and their two boys, and Sean’s friend Andrew. We had just come from Liam’s first piano recital. I had driven up north to see how my nephew was faring with his lessons and the electronic keyboard I provided for him to practice on (the one I bought in 2004, but hadn’t played since 2005). We burst in to the burger and hotdog joint, which is located in a building that used to house a bank. I scanned the decor — whimsical, with coins everywhere, from the ceiling to the floor — and in my rounds, noticed a man sitting alone. I smiled at him and continued ogling the posters, sculptures, and other money-themed collectibles.

I was filling my cup with Diet Coke when the guy, who’d just received his food, appeared at my right to collect his condiments. “You like this place?” he said.

“It’s my first time here, but so far so good,” I said, smiling. I dropped my soda off at the table with the family and returned for my own ketchup. The man was still by the condiments. “Hey, do you know if they have any mustard here?”

For the next 15 minutes, I sat with my family and ate my burger (with a hilariously thin meat patty, for which I was actually grateful, as it reminded me of the multiple McDonald’s meals of my childhood). The man sat at a table nearby. I noticed he’d moved from one seat to another, and that the new seat granted a clear line of sight between us. He lingered long after he finished eating, just sitting at the table and fiddling with his phone. I felt his unwavering stare.

Sean was the first to stand, indicating it was time to leave. We gathered our things and headed out the door, my nephew Brian and me leading the pack. Once the boys were in the back of my Mini, and Heather in the front, I started the car. That’s when I saw the guy approaching, with the universal “roll down your window” gesture. I did, and he held out a folded napkin. “You dropped this,” he said.

“Probably his number,” I said.

“What? Isn’t that weird?” My sister had an uncharacteristic look of incredulity on her face.