‘Here I was, sitting outside in the car, trying to not be obnoxiously early, and you’ve got a whole party going on out here,” I said, setting my purse on a table.

“Silly girl,” answered Stephanie. I hadn’t seen her in seven months, but to watch us greet each other, you’d think we’d shared a coffee that same morning. Steph lives in England with her oceanographer husband. She’d come back to the States to officiate not one, but two wedding ceremonies. Like my dad and a handful of other friends, Steph had obtained her “reverendship” online. Of all the reverends in my life — save for Rev Kev, who actually preaches to a congregation — Stephanie is the one who makes the most use of the power vested in her. It seems she’s always marrying people.

I gave her a hug and stepped back to get a good look at my real-life Snow White, with her shiny jet-black hair and cherry-painted lips. But something was amiss — there was a dark spot hovering just north of Steph’s trademark “V.” I raised a brow at the mark and said, “What’s up with your face? Henry beating you?”

“This?” Stephanie pointed at the bruise peeking through the pale concealer she’d applied to her upper lip. “Or this?” She took off her glasses and brushed her short bangs aside to reveal a bluish lump above her left brow. “Same night, separate instances, both funny stories,” she said. She explained how she’d been punched in the mouth while trying to break up a fight between two sisters at a wedding reception. Apparently, one of the sisters didn’t want to leave, the other tried to force her, catlike combat ensued, and Steph, being the good reverend, stepped in, intercepting one sister’s jab at the other.

Steph waited for me to finish laughing before going on to explain that later the same evening, while taking photos in the backseat of a car, she had somehow ended up on the floor, where she was inadvertently kicked in the forehead by a “gorgeous red stiletto.”

“Only you, Spider Monkey,” I said, using a decade-old nickname for the rambunctious woman.

I met Steph at my first real job, a call center in Pacific Beach. Smoke breaks have a way of bringing people together, and we took a lot of them. Stephanie stayed in touch when she relocated to San Francisco, and a few years later she moved into the same small complex in which I was living in L.A. — the birthplace of our partnership in crime. We were a pair of devils in the City of Angels.

One Saturday night, returning home from a Prom in Hell theme party, we happened to stop in front of what appeared to be a lively house in Silver Lake. The revelers were somewhat surprised to see us waltz through the front door, as we said hello to everyone on our way to the kitchen to make a few cocktails. We only stayed for about 15 minutes (turned out to be a boring party), but that was long enough for Steph to moon the camera recording a video for whoever’s birthday it was.

We were insouciant hyper-extroverts always on the prowl for new encounters, and the Hollywood clubs were our savannah. One night, we snared our prey by luring him back to my place with the promise of a pedicure. Once the hottie’s feet had been soaked, fluffed, and buffed, we asked him to try on a collar and these cute new cuffs I’d come by, which he did. But when I whipped out the camera he freaked out and admitted he was not a garage-shop employee as he’d said, but an actor who — after he mentioned it — I recognized from the movie Toy Soldiers, which had played on HBO earlier that week. I took a few pictures anyway (it’s not as if he could do anything about it, what with being tied up and all) but told him not to worry…we’d keep the pictures to ourselves, which we have.

After a couple of years in L.A., Steph and I brought our antics back to San Diego, collecting more and more stories at new haunts such as Nunu’s and the Waterfront. My naughty exploits with Steph number in the dozens, and most are not appropriate for sharing outside a cocktail-controlled environment. Our pace was frenetic, and our parties lasted for days. But even Michael Phelps needs to come up for air, and so it was that we slowed our hardcore beat to a chiller down-tempo. When Stephanie met her man and I met mine, we were feral cats who’d found a steady food source — calmed, but not entirely domesticated.

I was aware of the ever-increasing seriousness within me after Stephanie followed Henry to Monterey and then to England. Sharing all my time with David — a straight-faced intellectual — I’d gotten used to being the only goofball around. Now, as I watched my friend regale the crowd with another recent caper, I realized that despite her maturity, Steph had not lost her kittenish disposition; unlike many people I know, she goes out of her way to inject a little wackiness into an otherwise staid world.

After Steph had connected with everyone she was going to see and gotten her fix of fish tacos at South Beach, she had a few days to relax before heading east to officiate another wedding. I invited her and Henry over for dinner, hoping to treat them to David’s cooking and show off some mad hosting skills I’d acquired since they moved away. (Of the two of us, Steph had always been the caretaker, and I wanted to demonstrate how far I’d come in terms of being the thoughtful domestic goddess.)

But while I’d been practicing my Suzy Homemaker rock-star routine, Steph had been out shopping…and drinking, reportedly at a rooftop bar downtown. She arrived with her game face on, a relaxed smirk and a playful gleam in her brown eyes. When she requested water instead of wine, I made a mental note to tell her how on top of her refills I would have been. But once Stephanie opened her bag, my formalities were forgotten.

While David and Henry tended to the pork loin on the grill, Steph busted out a packet of stick-on mustaches. We cackled as we struck poses and took pictures of ourselves with my phone, then doubled over in laughter as we viewed them. Before I had a chance to recover from the hilarity of my cop-’stache macho-ness, Steph produced two tiny lucha libre masks for our thumbs. As we positioned our thumbs in wrestling mode, wearing those little masks, I gasped for air as tears rolled down my cheeks; an aching jocularity I hadn’t felt since last I saw my partner in crime. 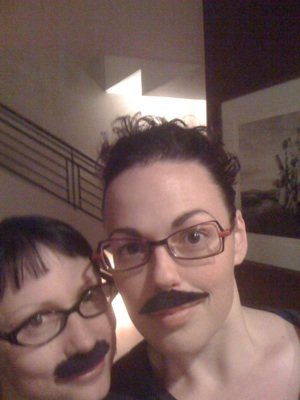