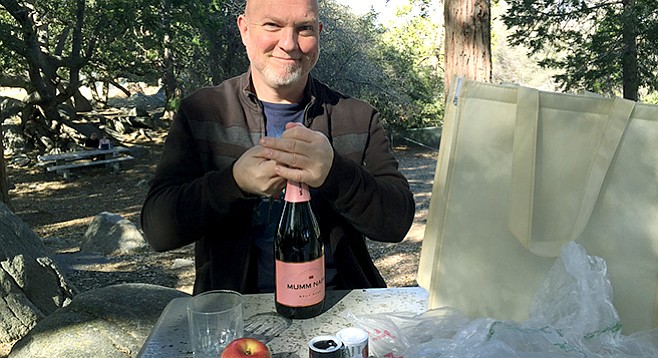 “I can’t believe you’ve never been to Palomar Mountain,” David said, for the third time in five minutes. “I could have sworn we went together.”

“I said I don’t remember ever being there; you probably went before we met. If we arrive and it looks familiar, I’ll let you know. For now, navigate for me. What’s my exit?”

“You’re on this freeway for at least another 45 minutes,” David said.

“Really? For some reason, I’d imagined it was closer to home. I must have been confusing it with Mount Soledad in La Jolla or Mount Helix in La Mesa.”

“Where we’re going is a lot higher than those hills,” David said. He looked it up on his phone and reported that Soledad and Helix are 824 feet and 1373 feet, respectively, while Palomar Mountain is over 6000 feet — higher than Denver, the Mile High City. The drive time would be just under two hours. This information made me giddy. David, who saw my face turn into a smile, said, “That’s right — road trip!”

It was a Sunday, and though we often use this quiet day to catch up on work, on this Sunday we decided to take advantage of the gorgeous weather and give ourselves a break. It was David who suggested the picnic, as well as the location. I often tell friends that one downside to working from home is that you can never go home from work. Even when I set my tasks aside for the day, to open a bottle of wine and pick up a book or start a new Scrabble game with David, in the back of my mind there is always this awareness — a pressure reminding me that I could be doing something more productive. Fast on the heels of this awareness is an inner voice that scolds me for not making the most of my time, followed swiftly by another — my defender — that reminds the first voice that it’s okay to relax, and that balance in life is important for my overall well-being.

It’s an ongoing battle, but one that is much easier to fight when my recreation is taken elsewhere…and the longer it takes to get there, the better. While driving, there is no expectation in any corner of my mind that I should or could be doing anything else but enjoying the ride. And there are no electrical outlets in the woods. The only thing better than taking a drive in Southern California is taking a drive in Southern California on a warm day after a bout of cold and rain. The landscape, most always desolate and brown, was bursting with life. As we drove along, we passed hillsides blanketed in emerald green and speckled with a dazzling array of vibrant colors, mostly shades of yellow and purple, with the occasional shock of white and hot pink.

We were not alone in enjoying a Sunday drive. As we drew closer to the base of the mountain, prior to embarking on the zig-zaggy trek to the top, we noticed more sporty convertibles and motorcycles. The motorcyclists were of particular interest, because unlike the practical bikers back home, getting from point A to point B, these guys were covered head-to-toe in plastic and form-fitting leather jumpsuits. We stopped at a little store near the top to grab some salt and pepper and stood in line behind a man in a black and white pressure suit, which had a big plastic hump on his back that made him look like a young, fit Quasimodo. David explained the hump made him more aerodynamic. I’d heard of the famous observatory, home to the Hale telescope, but I’d never had much interest in seeing it firsthand. So when we arrived at the top, just to discover the grounds would be closing in about an hour, with David now insisting I explore the observatory before our picnic, all of my happy, relaxed feelings evaporated faster than a sneeze in the desert. It wasn’t just the observatory that was closing, it was the whole parking lot, the picnic grounds, everything. Suddenly there was a looming deadline on our enjoyment, and despite the sun, a dark cloud of anxiety enveloped me.

I was angry at David for not checking the times in advance, and angry at myself for not thinking to ask, and for allowing the time pressure to spoil my mood. I took a deep breath and forced a smile, then tuned my inner radio to my defender voice, which was saying, It’s fine. So what if you end up picnicking a little ways down the road. He wants to see the big machine, give it a glance and go from there.

We walked up into the observatory, scaling the flights of stairs in the rarefied air, and glimpsed the Hale telescope through a glass window. We entered the museum, and though there were many items, images, and words, my mind was so focused on the closing time-window for picnicking that I barely glanced over it all before I dashed back to the door. We found a table in the shade of giant black oak trees and spread out our things. “An hour’s enough, right?” I said. “I just don’t want to feel rushed; I wanted to relax here.”

David nodded and said we had plenty of time. When we’d walked by on our way to the observatory, there’d been kids screaming and laughing, climbing on the rocks. But now, most of the crowd had dispersed, leaving us alone in the dappled sunlight to enjoy the fresh mountain air and nature’s soundtrack: a woodpecker beat on the trunk above us, bluebirds and song sparrows flitted about, black crows picked at the crumbs beneath other tables, and chipmunks rustled through the fallen leaves in search of acorns. Time fell away and I smiled at David, who was slicing the baguette, pouring chilled rosé champagne into glass tumblers, and then laying out the avocado, basil, sliced meats, cheeses, and nuts.

“I’m sorry I rushed you through the museum,” I said to David, who shrugged to indicate it was no big deal. “Seriously, though. There’s stuff in there I’d like to check out; it would be cool to learn about the discoveries made using that telescope. So, I say we do this again, soon, only next time, we leave a few hours earlier, and you wear one of those sexy leather jumpsuits.” I winked, and we clinked glasses.