It had been a long while — almost a year — since I’d last seen the pig. “Is he still drinking?” I asked Sara.

“Good,” I said. “Because he’s a belligerent drunk. Hell, he’s belligerent sober. You should hire one of those dog trainers to help discipline him.”

“He listens to me,” Sara said. “He’s also really protective of me. But, yeah, he’s a little bastard. I love him to death, though.” 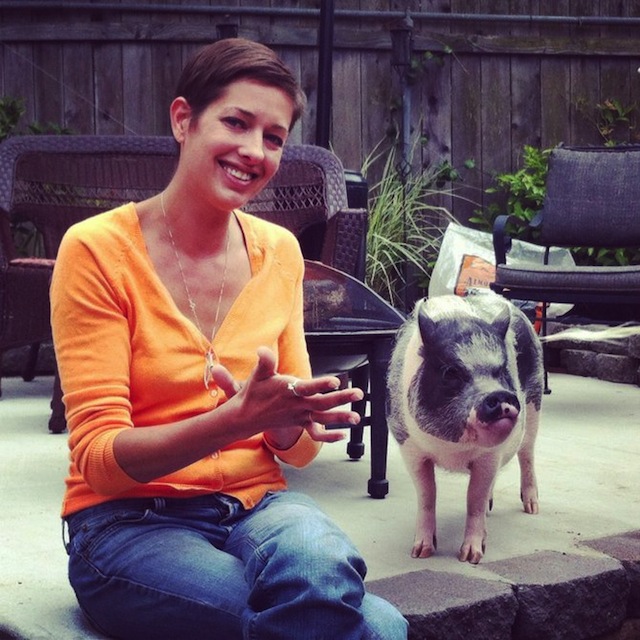 “Carnitas, come here,” I said, and then made the same clicking noise with my mouth that I used to make when I pig-sat the tiny swine two years ago, back when his entire body fit into the crook of my arm. The full-grown, 18-inch tall, 55-pound porker trotted over to me, and I couldn’t help but be delighted that he’d recognized my call. When he reached my outstretched hand and found it empty of treats, he lost interest and scampered away.

Disappointed in the pig’s aloofness, I turned my attention to the crowd gathered around the cement patio table, upon which David had placed a platter of ramekins. It was July 4, three and a half days since foie gras had been declared illegal in California. Looking like a band of brewers and distillers during Prohibition, chefs and foodies formed a tight huddle as they tasted the contents of each numbered ramekin and offered feedback to David, who was close to perfecting the foie gras crème brûlée he planned to make for his mother’s birthday dinner. He was looking for opinions from the pros. A Fourth of July barbecue hosted by friends and restaurateurs provided him the perfect opportunity.

“I think this one’s too salty, but it depends on what your intention is,” said a cook from the downtown club and restaurant Stingaree.

Anthony from Noble Experiment pointed at number 2. “That one’s my favorite,” he said, singling out the only recipe that contained armagnac instead of port.

Both Hanis of Carnitas’ Snack Shack (the pork-centric eatery he and Sara had named after their beloved pet) and Martin, the man behind Alineaphile, agreed that number 7 shined above the rest. Ian, of the still-under-construction North Park baking bistro Swoon, leaned toward number 4. David took notes.

I heard the scrape-y sound of glass on cement and turned to see Carnitas lapping up the beer he’d intentionally spilled from a bottle someone had set on the ground. “I told you he was an alcoholic,” I said to Kate, a woman I met earlier who had, until that moment, disbelieved me (despite the notice posted on the front gate that warned everyone: “Do not leave your drinks unattended because Carnitas is a drunk”). 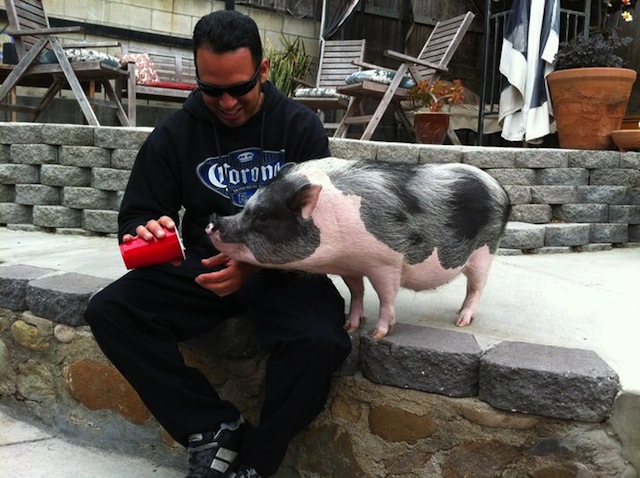 “Make way for the boob luge!” The shout came from inside. I watched as a few people scrambled to clear a corner of the table. Before I had a chance to ask what a “boob luge” was, Rod emerged from the kitchen holding a giant block of ice in the shape of a woman’s chest. Behind him, someone carried a pitcher of pink liquid.

“It was a late-night internet purchase,” Rod informed me. “You pour the pink lemonade vodka into these holes at the top and the shots get chilled as they travel through the ice, and then it comes out right here.” He pointed an index finger where each nipple would be if the ice bust hadn’t been Barbie-doll smooth. 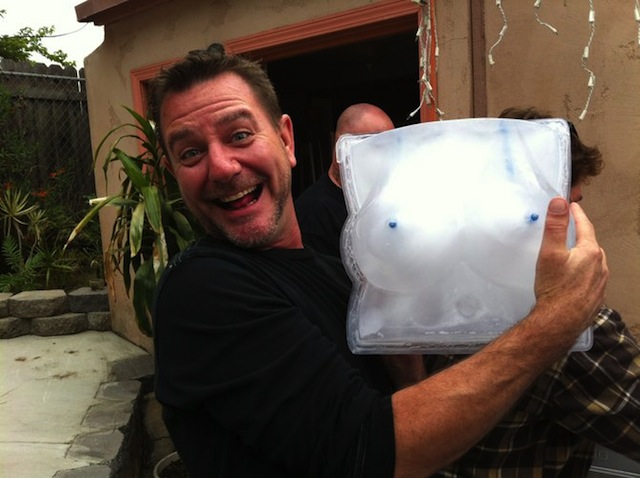 Quinn was among the first to step forward to suckle from the iced liquor teat while the rest of us cheered her on. The ice had cracked on one side, so by the time Sara and Hanis got their turn, they needed to double-team the anonymous torso — Sara on the “nipple,” and Hanis on the “side boob.” All the while, Carnitas stationed himself under the table, where he could slurp up sugary vodka that flowed over, through, and around the broken luge. When I tried to shoo him away, the pig barked a warning, and suddenly I was an enabler.

Originally, our plan had been to hang out at Sara’s for a while and then head back to our place to see the fireworks. As we’d learned last year, our new apartment affords a close-up view of the Big Bay Boom (three synchronized fireworks displays) and, further away but still spectacular, shows in Coronado, La Jolla, and at Sea World. But the sky had been overcast all day, and each time David and I checked in with each other we were having too much fun to leave. I’d all but given up on the plan until 8:30, just after the sun had set, when I noticed a break in the clouds and began to feel anxious.

“We’ve got to go now,” I said after I’d appeared at David’s side and interrupted a conversation he was having.

“I thought it was too cloudy,” he said.

“I know, but the sky just cleared and it was the plan, remember? One year. We have to be there.” Exactly one year before, shortly after we’d received the keys to our new apartment, David and I had gone out and bought a small table and two chairs for our modest terrace. It was the first, and at that time the only, furniture we had in the place. We had just completed the arduous and emotionally eviscerating process of short-selling the only home we’d ever bought and decided to celebrate the start of a new chapter in our life with pizza, a bottle of wine, and front-row fireworks.

“Okay, let’s go, then. No time to say goodbyes. If we leave now we can still catch the show,” David said.

We raced to the car. As I dashed across town, I was glad I hadn’t partaken in any of those vodka shots. We got to our place and ran upstairs. “Five minutes to go,” I said. A moment later, the sky lit up in three gigantic bursts of light. “What the…? It looks like they lit ’em all up at the same time,” I said.

“That was a lot of firepower for just the start of the show. That looked like all of it. I think someone effed up, big time.” We waited for several minutes, during which I checked Twitter for updates on what might have happened. “Well, even if that was it, we’re here! And, look, Coronado and La Jolla just started. We can watch those,” I said.

David smiled. “To a year,” he said, handing me a tumbler of honey bourbon with ice.

He put an arm around me as we clinked glasses. “To a year, beh-beh.”