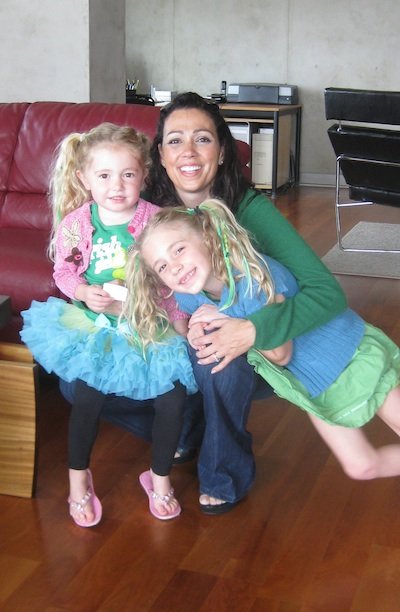 Jane and her girls

Apparently, one of the other mothers at “drop off” — where Jane drops her daughter Bella off at school — was shocked by my sister’s two-toned hair. As Jane relays it, her friend said something along the lines of, “Jane, what the Hell happened to your head?”

“It was dark in my bathroom, it looked fine,” Jane told me as she explained how she was trying to conceal her “sparklers” (my term for little gray hairs that sprout around the hairline). “But when I was outside, Joanna told me that it was like four shades lighter than my hair.”

“It’s not just that,” I said. It’s lighter and weird looking. Like it’s not even hair, but there’s some kind of mud mask on it that dried. See, the rest of your hair is shiny, but this is just…” I ran a finger along the affected area. “This is just kinda gross. And I can still see some gray hair. Is that the same spray color stuff you used to spray paint your cat’s ass?”

“No,” Jane said. This is nice, this is Bumble & Bumble. I used some Hair Club for Men stuff on the cat, thank you.” Jane’s grimace told me she was dismayed at yet another reminder that she will never live that incident down. That we will forever tease her about the time she used color spray to fill in bald patches in her cat’s fur so that the woman coming over to adopt the kitty wouldn’t realize what a neurotic mess it was. Jane had also baked cookies that day, to make her house smell homey, and she had given the stressed-out feline a double dose of kitty Prozac so that it would seem extra mellow.

“Well, this isn’t as funny as the cat, but thanks for the giggle,” I said.

“Seriously though,” I said, my face beginning to ache from the unusually broad grin. “Go wash that shit out, it’s starting to give me the creeps.”