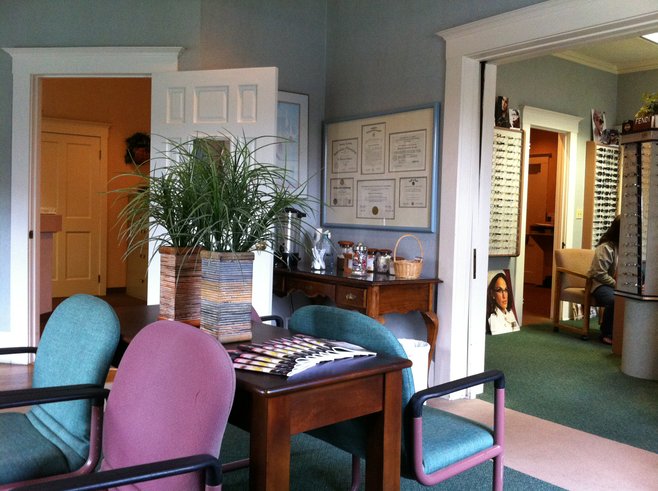 I was kidding when I tweeted, “Off to get my ‘watery eye’ checked out. Let’s hope the doc doesn’t suggest sticking a needle in my tear duct.” I never would have freaked myself out like that had I considered it a possibility. Certainly, with all the fancy technology these days, all those drops and lasers and stuff, there should be no reason to get all medieval on my macula.

I entered the doctor’s office with a smile on my face and a spring in my step (I’d been tethered to my computer for hours and was glad to have an excuse to get some fresh air and see new faces). Because I was a new patient, I arrived early so I could befriend the ladies at the desk and fill out the necessary paperwork.

This time, I chose a doctor who was listed in my insurance plan. I knew how much a standard exam cost, and of course, designer glasses, but I had no idea what kind of bill might be coming after a “watery eye” exam.

It was a typical opthamologist’s office – a couple of plants, a few framed diplomas, a small table offering coffee and tea, racks of eyeglasses here and there. I’d been to my share of optometrists since junior high, when my best friend’s mom surmised I was vision impaired and told my parents to get me to an eye doctor. Since then, I’d embraced glasses-as-accessory and amassed quite a collection.

Of all the sorts of doctors I’ve had to visit for various reasons (a dermatologist for that blue mole on my butt-cheek, the dentist, the emergency room for a squirrel attack or severe stomach pains, even my physician for a standard check-up), the eye doctor has always been the least traumatic, the only one who has never been a source of anxiety for me. Until now.

Most of my time in the exam room was standard. An assistant tested my vision — a short check, as without my glasses I can’t even see the big E. Then I got the, “Which is better” spiel: “Number one, or number two… number two or number three… number three or number four.”

Shortly after the assistant left, the doctor came in, introduced himself, and pulled over a familiar, giant machine on which I was asked to rest my chin and forehead so he could take a magnified glimpse into my eyes. I waited for it. “Oh! Huh. This is very unusual,” he said. “It’s nothing to be worried about, it’s just…” Other doctors have used the word “pretty,” but this one repeated the word, “unusual.”

Apparently — I can’t find any information about it anywhere, but this is what all eye doctors tell me — I have bits of pigment (golden brown flecks from my iris) on my pupil. It’s some congenital defect, supposedly a rare one. Eye doctors always seem surprised and delighted when they get my peepers under a scope.

But the pigment is on my left eye, and I only had issues with my right, which for the past several months had been leaking tears without permission. The doctor put some yellow goo drops into my eye, another test, though I can’t remember what it was for.

“It doesn’t itch, there’s no pain, so I haven’t been worried about it,” I said of my symptoms. “Mainly, it’s just really difficult to keep any makeup on that side of my face.”

While I was babbling about the annoyance and embarrassment of having eyeliner run down my cheek during a business meeting, the doctor was digging through one of his drawers. He held up another plastic dropper bottle and said, “Okay, this is going to sting for a second, and then it will numb your eye so I can probe.”

“What? Numb? Probe? These are not comforting words,” I said, with a nervous laugh.

The doctor laughed in response, also not comforting. “I’m just going to probe your tear duct to make sure there’s no obstruction.”

“Like with a needle?” That’s what you get for making stupid jokes, I chided myself. They come true.

The numbing drop went in. I thought it was way too soon, hardly ten seconds after he administered the drop, for him to be asking me to look up. The next few seconds seemed to last for hours. At least when they were removing that blue mole on my butt I didn’t have to watch. But there was no way to avoid focusing on that long, silver stick as it made its way toward my eye. I braced myself for the unpleasant physical sensation of it, and told myself not to flinch for fear that the probe would slip and rip some fragile bit of eye socket flesh.

I didn’t feel a thing. The doctor sat back and returned his tool to another drawer. “Okay, well there’s no blockage there. I’m going to give you some eyedrops and recommend you take a decongestant, because the obstruction could be further down. If that doesn’t work, there is a local specialist who could go deeper with a procedure that requires general anesthesia.”

“No, no, that won’t be necessary,” I said. “I just wanted to make sure my watery eye wasn’t symptomatic of some terrible disease or anything. But I’m good.”

As I drove away, I added “eye doctor” to my list of physicians to fear.