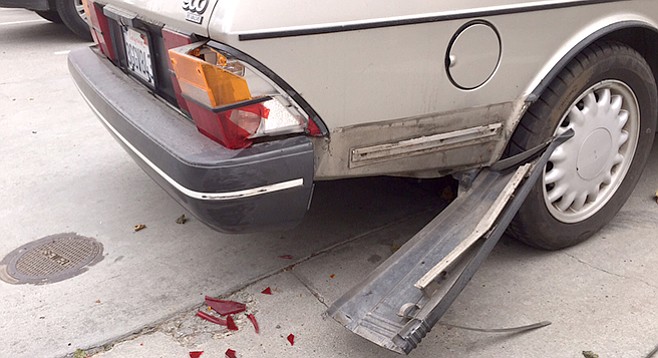 We didn’t think much of the noise. After a few months of settling in to our new place, we’d learned to tune out the random racket of the parking lot below our bedroom window: neighbors calling out greetings to one another, car doors opening and closing, their alarms beeping and honking. This particular noise sounded a lot like the lid of the dumpster being slammed down, a frequent occurrence as Starbucks employees work to maintain order through the early-morning rush.

A few hours passed before David opened our front door and found the note. It read, “I just saw a large black pickup truck with monster wheels take out a portion of your back bumper on the Saab.” There were actually two notes in one. The first, in black ink, included our note-writing neighbor’s phone number and an apology for not capturing the license plate. The second, written around the margins in green ink, read, “Just found the truck” and included a license-plate number and the name of another man who had witnessed the incident.

David was more defeated than angry. “I was planning to go get some work done, but now I have to deal with this — I’ll have to call the police, and then probably the insurance company.”

“At least we have witnesses and a license-plate number,” I said. “We’ve only met that lady once or twice — I’m so glad she knew where we lived and that that was your car. And don’t worry, Beh-Beh, you can still go to your studio as you planned. I’ll handle this.”

I called the non-emergency number for the police department and an officer arrived within the hour. He examined the shattered taillight and the big strip of side-bumper that had been ripped off. He noted the skid mark that indicated how far the parked car had been pushed aside. Then he asked, “How much damage would you say this is, less than $500?”

“I have no idea,” I said. I wondered if this was some failing on my part — did other car owners know offhand how much it would take to repair certain parts of their damaged vehicles? “And I’m not so worried about the money; I have great insurance,” I added. “It’s just — who does that? What kind of person smashes up someone’s parked car and then leaves without making any attempt to find out who owns it? I just want him to be caught, maybe get a citation, because this is super uncool.”

“Well, I’m going to go find this guy,” the officer said. He took the note our neighbor had left and the registration certificate for the Saab and told me he’d be in touch soon.

While the cop was out searching for the miscreant, I waited and wondered what might happen when the officer caught up with Mr. Monster Truck. Would the guy get a ticket? I did a little research and learned that, according to the law, if you hit a parked car and “the owner of that property isn’t on-scene,” you must leave a “conspicuously placed note” with contact info and a summary of what happened, and then “immediately contact your local police department.” If you leave the scene without doing either of those things, it’s a misdemeanor for which you could be facing $1000 in fines and up to six months in a county jail.

The officer called and told me he’d located the dude and brought him back to apologize. In all of my imaginings of what might happen, I had not foreseen the offender being forced to return to the scene of his crime. A crime I would have declared an unfortunate accident had he simply left a note. It would still be an inconvenience to deal with getting the car fixed, but I wouldn’t have such hard feelings. Accidents happen. Abandoning the scene of one is stupid and inconsiderate. And illegal. Now I had to face him? I thought I’d be relieved, but instead I felt uneasy.

I greeted the officer once again in the parking lot, but he was alone. Wow, he did arrest him. I looked toward the back of the patrol car, but it was too dark in there and too bright outside for me to make out any shapes. “Here’s the deal,” the officer said. “This guy’s a kid, and he made a mistake. He’s parking around the side. He should be here any minute.” He wasn’t arrested, I realized. The officer continued, “He’s going to give you his insurance information, and you’ll use that to make a claim, and you won’t have to pay anything, and we’ll pretend like I wasn’t here.”

I didn’t necessarily want the guy to be arrested, but I was disappointed he wasn’t even getting a ticket. The mysterious Monster Truck Man emerged from around the corner. He was in his early 20s, and he wore a red 24 Hour Fitness trainer’s shirt. I later discovered that he’s also a Marine. This, too, was disappointing. As a Navy brat, I always considered military men to be more upstanding than the general public.

He was apologetic. “I’m so sorry,” he said. “I was going to come back, I just didn’t have my information with me.”

Right, I thought. You were going to come back, four hours later, and just hope the car was still here. “Shit happens. Whatever. You’re here now. It’s a good thing I have vigilant neighbors,” I said.

He apologized again. “I didn’t want it to be this way,” he stammered. “I didn’t want to meet you like this.” As if he’d ever intended for us to meet. I wondered what kind of lecture the officer had given him. I wondered if this guy realized just how much he was getting away with. I hoped it was enough to keep him from doing it again.