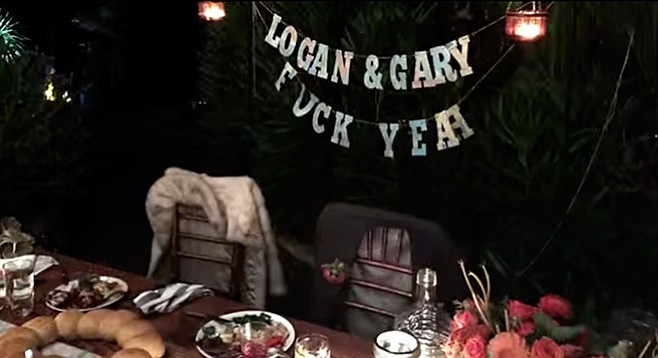 “The invitation says there will be ‘picnic blanket seating,’” I said. “What do you think that means?” I expected my sister Jenny to have a better handle than I would on wedding stuff. I may have been a bridesmaid three times (for each of my three sisters), but when it came to our own nuptials, David and I chose to elope. We didn’t have “guests.” We didn’t even have a witness — our county-assigned officiant had to pull a young file clerk from her desk to fill that role. I have countless acquaintances, but few close friends, so I don’t get many wedding invites. Jenny doesn’t do “acquaintance” — all her friends are besties, and there are enough of them to fill a soccer team. I know this because they all grew up playing soccer together. “You don’t think we’ll have to sit on the ground, do you? Is that a thing?”

“Wait. I don’t get it,” Jenny said. “I just see a blanket, an empty blanket — my imagination can’t even put me on the blanket. What else does it say?”

“It says, ‘Please dress accordingly,’” I read from the card in my hand. “How do you dress to sit on the ground? Even when I go on actual picnics I find a table to sit at,” I said.

“I need more information to go on,” Jenny said. “Who are these people?”

“You know my friends, Gary and Logan, right? They’re the ones behind the Cellar Door restaurant and they’re getting ready to open that Native Spirits store on El Cajon Boulevard. And Gary’s also a master builder at Legoland. Remember?”

“True, but I think there’s more to it. Ground seating, no kids… Ooh, I think I figured it out! I bet they were able to line up the bird — with a bird flying around, you’d probably want people low to the ground. At that falconry class I went to, they don’t allow young children because kids distract the birds. So that must be it!”

“Gary and Logan are going to have a falcon as their ring-bearer,” I said. “That’s got to be why the floor-sitting and no kids. But I still don’t want to sit on the ground. I hope I can find somewhere to stand.”

“Wait — a falcon ring-bearer? Yeah, this is not like any of the weddings I’ve been to,” Jenny said. “Whatever happens, take pictures.”

When David and I arrived at the venue (a six-acre, $26 million estate atop a cliff in La Jolla), a valet took our car, and another asked if we’d like a ride down the long driveway on his bus version of a golf cart. We opted to walk. As we winded our way down the verdant path that leads around the massive home and to the grounds, we paused occasionally to breathe deeply and soak in the resplendent view. Palm trees, paragliders occasionally floating by and waving at us, the coastline below, and an endless, lush garden spread throughout the property: it was like stepping onto the set of a Bond movie.

The garden was berry-centric — we passed raspberries, strawberries, blueberries, all heavy and fragrant with fruit and flowers. I’d heard of this place; it’s where many of my chef and farmer friends (including Gary and Logan) converge each year to pick all the berries and incorporate them into a massive meal for the annual soiree known as “A Berry Good Night,” which was now in its sixth year and being held exactly one week after the wedding.

David and I emerged from the jungle-like path and stepped into the clearing where the ceremony and reception would be held. The picnic blankets (small serapes, actually) were laid on the grass like flying carpets floating in formation through a green sky. I was relieved to the point of giddiness when I noticed the handful of benches placed on the periphery, and quick to set my purse on one. Minus my anxiety about navigating the awkwardness of ground-sitting in a dress, I was free to give myself completely over to the magic of the moment.

And it was magical. Plenty of familiar food purveyors found a way to contribute. Fishmonger Tommy Gomes of Catalina Offshore was officiating, and Hanis Cavin of Carnitas’ Snack Shack was slow-roasting a pig next to a million-dollar view of the coastline. When it was time, I took my seat on a bench, with David beside me, and watched as the majority of guests settled down onto the serapes before us. When Logan appeared in the distance, there was a bit of murmuring as the ground-sitters considered the tradition of standing for the bride, and collectively decided to remain seated. Logan was a vision in pink and white, with little bits affixed to her dress that twinkled like stars as they caught the sunlight.

When it was time for the rings, I smiled in anticipation. The crowd watched in bemusement as Gary donned a falconer’s glove, held out his arm, and called, “Habibi!” Gasps traveled like a stadium wave as the falcon, rings affixed to its ankle, swooped low, perfectly down the aisle, and then landed on Gary’s glove. The clearing erupted in delighted laughter and applause.

When the ceremony was over and everyone was milling around, getting drinks and sushi before we’d all be taking seats at actual tables for the reception dinner, David and I found ourselves off to the side of the yard, standing together alone. “Right there,” David said. “Just that one spot. Not the house, not the rest of all this, just those two chaises, and the ocean. That’s what I want for us someday.”

“Me too, beh beh,” I said. “The chair part especially.” We stood there chuckling for a moment, and then, with a deep breath and a happy sigh toward the ocean, we returned to the party.