Lord of the Prize 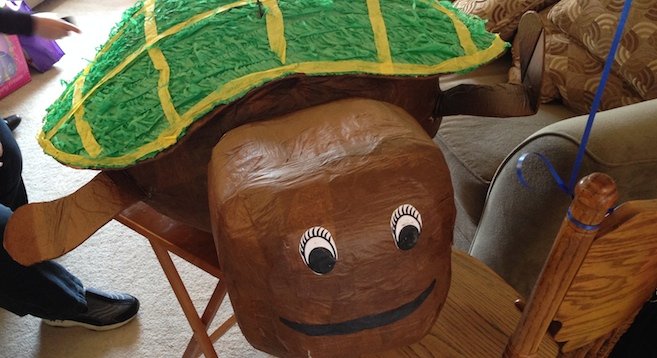 Simon had to turn sideways in order to fit the freakish creature through the front door of my mother’s house. All the kids were in the backyard, so Simon — my sister Jane’s husband — swiftly hauled the monstrosity into a bedroom where it wasn’t likely to be spotted. Mesmerized, I followed him and watched as he plopped the colossal beast onto the bed. It splayed out, covering two-thirds of the mattress, and some of it extended further over the edge of one side. “That’s what, a twin bed?” I asked. 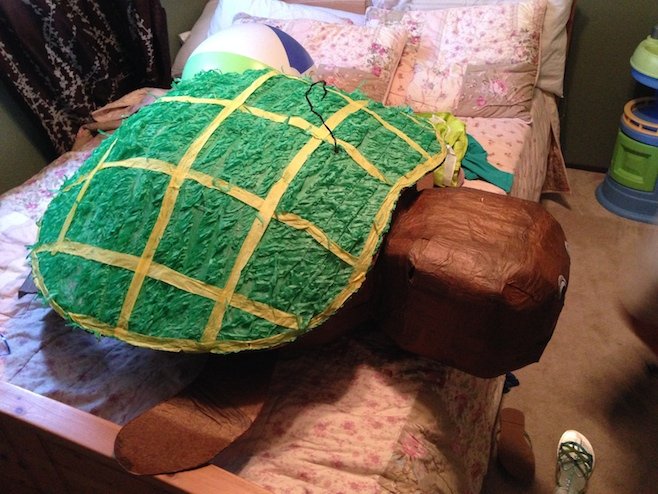 “No, full,” David corrected me. He too had come to get a closer look. “Full is bigger than twin.”

The three of us stood in awe and nodded in appreciation at what was, without a doubt, the largest piñata any of us had ever seen. “So it’s, like, a turtle?” I said, as I stepped around the bed to get a look at its massive, misshapen head. “What was that thing Godzilla fought? Mothra?”

“No, that was the moth,” David said. “The turtle was Gamera.”

We stared in silence at the flat front of the crude, oversized, rectangular head, and the turtle’s “face” stared back. The eyes were two ovals cut from white paper colored in with black marker. The mouth was a subtle smile, barely visible against the dark brown paper upon which it was drawn.

“Olivia wanted it to fit with the ocean theme, but not necessarily anything Little Mermaid,” Simon explained.

“Don’t get me wrong, they love the Little Mermaid. But it’s kind of like, ‘behind closed doors I love it.’ Anyway, I went to this shop where I can get what I call the cheapos — these things are gonna be beat to hell, no use overspending — and they had some pretty cool ones, some that were more symmetrical, but their ocean-themed choices were limited. There was a Dory from Finding Nemo, and I was like no, too juvenile. Then there was a huge killer whale, but man, with all the recent press, that wouldn’t be a good thing; I’d have the mayor after me. Anyway, they said, ‘We have a turtle.’ Which is bad too, because green leatherback turtles are endangered, but it was a safer bet than Shamu.”

Simon described how after watching the guy in the shop climb over “a room so jam-packed it was like hoarders of piñatas” and wrestle the turtle to the ground, he was committed. “It’s so ugly, you know it’s handmade,” Simon said with a chuckle. “I think someone took it upon themselves, like, ‘How can I make a turtle piñata?’ And there was no mold for it, so they just threw together some cardboard and papier-mâché. But the kids will have a blast with it, and you can’t beat that for $17.99.”

“Well, technically,” I began, but David playfully punched me on the arm so I wouldn’t finish the secret police pun.

Simon went to retrieve the 20 pounds of candy he would pour into the flap he’d cut in the turtle’s shell, and David and I made our way outside. On the way, I stopped in the kitchen to refill my glass of wine so I would be better equipped to deal with the chilly breeze and the 15-or-so children trying to drown each other in the Jacuzzi.

Simon and his brother Jesse worked to sling a rope over a high branch of the tree that extends over my mother’s deck. Simon secured one end of the rope to the fence and the other to the coarse wire hook that protruded from the turtle’s paper shell. It took both men to hoist the candy-packed piñata.

I had been to enough of my niephlings’ birthday parties over the years to know what sort of horrors to expect next. At least this time the throng of abusers would be attacking something that actually looked like it needed killing. My sister Heather sidled up to me and said, with a hint of solemnity, “Remember Dora?” I nodded. That one had been the most traumatic of them all. With a sickening awareness, we grown-ups had watched as the children brutally battered the effigy of a little girl, ripping her apart to get at the goods she contained. “That sweet, little cartoon character,” Heather said. “She was decapitated, and her head was just hanging off my back porch for a while.”

My mother’s backyard overlooks a canyon. The children lined up, youngest to oldest, and took turns swinging at the candy-engorged monster, which Simon, with child-like glee, would raise and lower, challenging the heaviest hitters. As the behemoth began to fail, it continued staring impassively at us through those plastered-paper eyes.

It was Liam and Brian — the oldest, and the best in the bunch when it came to the swift assassination of candy kahunas — who finally disemboweled the turtle. The body continued to hang as candy cascaded from its undercarriage, and the seemingly feral children pounced upon the sugary bounty like a pack of hyenas scrambling for scraps of a freshly felled zebra.

Bella and Brian had developed a half-baked tactic, and that was to throw themselves on top of the pile. Simon, who was clearly proud to see that his daughter was doing the same thing he’d done as a kid, explained, “You spread yourself out and create as much surface area as possible, and just lay on it.” The problem was that Bella and Brian lacked an exit strategy; once they rose to consolidate their booty, the other hyenas descended upon it. 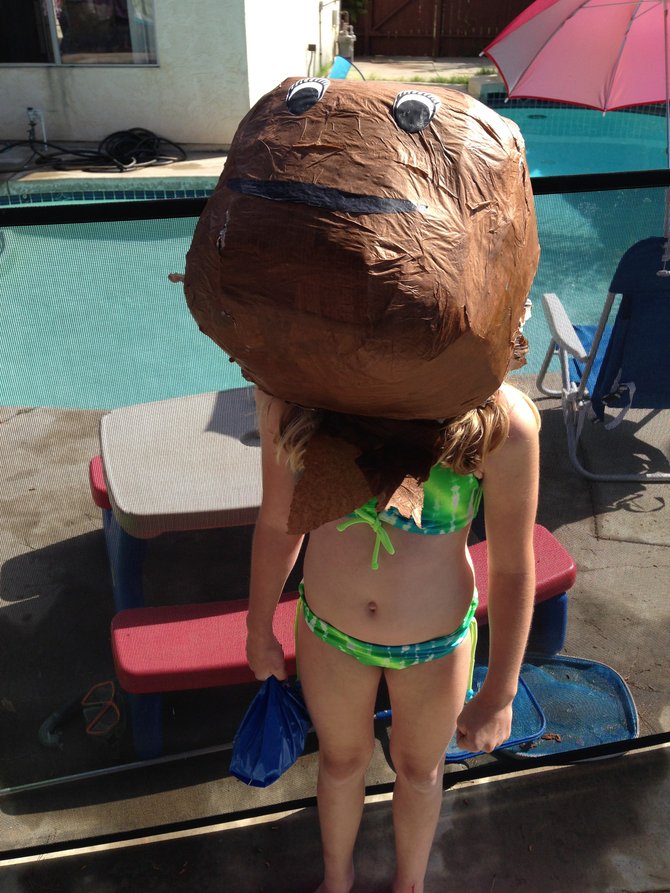 While my sisters were busy lecturing Bella and Brian on the importance of sharing, Liam busied himself by whacking at the turtle’s remains until he succeeded in decapitating it. It was at that point that we were treated to a new kind of horror. Bella stopped arguing with Jane about keeping all the candy and grabbed the turtle’s head from the deck. She then plunked it on her own head, and wore it around like a sinister helmet.

Again, Heather — a longtime high school English teacher — sidled up to me and said in an ominous tone, “Fancy thinking the beast was something you could hunt and kill, said the head.” I recognized the line from Lord of the Flies. “That’s the most awesome moment of the novel,” Heather said. “It’s the moment the character realizes that the beast was actually within all of them.”