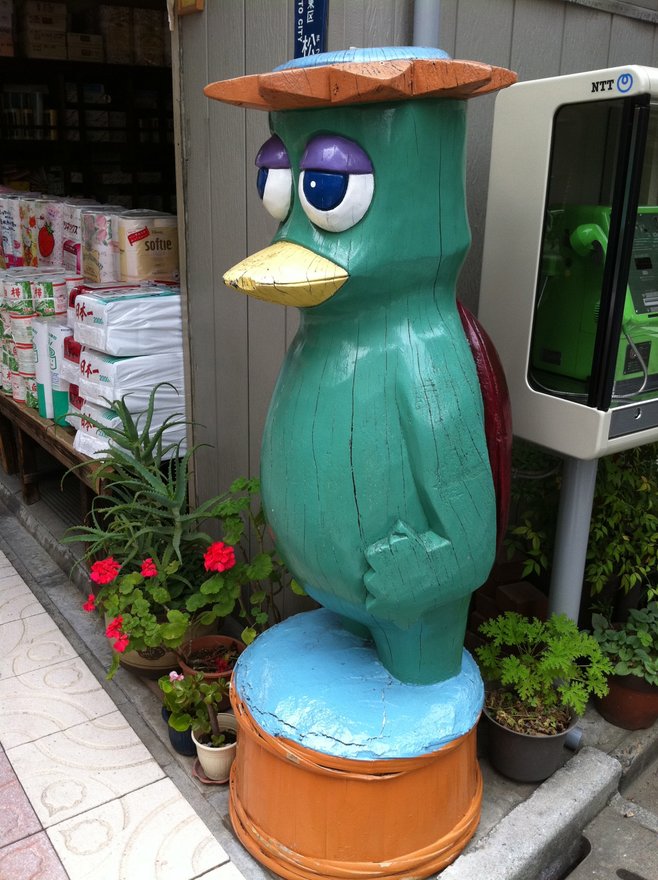 David followed my gaze to the green-painted humanoid statue. “Looks more like a turtle,” he said.

“Turtles don’t have beaks. And look at its head – maybe it’s some kind of monk, that looks like a Friar Tuckish crown around a bald patch.” We continued walking. After a few minutes, we passed a similar figure, only this one was doing some kind of handstand. “Maybe we’re both right – it’s a turtle-duck.” 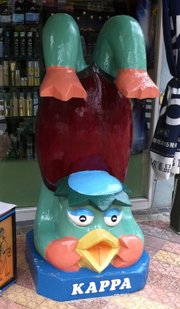 As we ventured further down Kappabashi-Dori — the area nicknamed Kitchen Town, which is Tokyo’s go-to kitchen supply district for the world’s largest city’s 80,000-plus restaurants — I noticed tiles in the sidewalk, engravings on signs, depictions on banners, and more carvings, all versions of the same creature. Some of them were embracing a golden ball.

“I wonder what that thing has to do with cooking,” I said. David shrugged. We’d already marveled at the specialized stores (some shops sell only those utensils and items necessary in the preparation of a single recipe, such as soba noodles), and salivated over the super-realistic plastic representations of ramen, sushi, ice cream, and any other prepared food I could imagine. After hours of exploring Kitchen Town, we were now in search of real food, which, ironically, was nowhere to be found.

As we backtracked down the sidewalk toward the train station (where we were guaranteed to find sustenance), I continued to wonder about the neighborhood’s mascot. “It’s Kappabashi-Dori, which means Kappabashi Street, but there are other streets that start with the word Kappa,” I said. “Do you know what that means?” David shook his head.

Before leaving the country, I’d purchased a few Japanese language apps for my iPhone, one of which is an extensive Japanese-English dictionary. I typed in “kappa” and 21 related definitions popped up. “Ah, this makes sense. The first definition is ‘kappa,’ mythical water-dwelling creatures.’ Also means ‘excellent swimmer.’” I scrolled down, reading the additional definitions as I went. “Raincoat, vigor, printing, mythical—what the freak?”

“What?” David swiveled his head to make sure my suddenly shrill voice hadn’t annoyed any natives.

“Check this out – one of the things that comes up under ‘kappa’ is, ‘mythical ball inside the anus that is sought after by kappa.’ Freakin’ weird, right?”

Bafflement continued to dog us as we ate our curry and rice, as we rode the train back to Shinjuku, as we stared at the elevator doors all the way up to the 21st floor, as we entered our temporary home, one of myriad high-rise apartments in Japan with a distant view of Mt. Fuji. Once inside, I went straight for my laptop.

“Listen to this,” I said. David retrieved a bottle of water from the fridge, kicked off his shoes, and joined me on the bed. “Kappa means river child or water sprite, which seems accurate, given how adorable and cartoony they are. Nothing about anus balls… oh wait, this is kinda close: ‘Kappa are usually seen as mischievous troublemakers. Their pranks range from the relatively innocent, such as loudly passing gas or looking up women’s kimonos, to the malevolent, such as drowning people, kidnapping children, raping women,’ Jesus. This isn’t Donald Duck we’re talking about.”

Wikipedia had some illustrations of the creature; they looked nothing like the sweet Teenage Mutant Ninja-ish mascot of Kappabashi. I pointed to one particularly disturbing image — it was like Gollum meets Godzilla. “Look at those long sharp teeth, scaly skin, and crazy claws.”

“Leave it to the Japanese to make that thing cute,” David said. “I’d like to see their pictures of the Devil, with big puppy dog eyes. Next thing you know they’ll be coming out with a kawaii Adolph Hitler.”

“It’s funny ‘cause it’s true,” I said. I returned to my search. “Here we go. Apparently, these things were invented to explain away drownings and surprise pregnancies. Ew, I didn’t really need to know this, but now I’m going to tell you – when someone drowns, their butt-hole becomes distended, so villagers surmised some kind of ball must have been sucked out. They call it the shirikodama. Oh, and get this – you know the kappamaki?”

David nodded. Of course I do, his face told me. The kappamaki, or cucumber roll, is one of his frequent orders when we’re out for sushi.

“Well, it’s named after this monster-turned-pet. When it wasn’t eating kids and anus balls, it was said to be after cucumbers. Women would carve their children’s names in cucumbers and throw them in the river to appease the creatures. And that whole bald, Friar Tuck head-top? It’s a container-of-sorts for some kind of liquid that allows the kappa to leave the water. Despite its horrific pursuits, the kappa is supposedly very polite, so one of the ways to debilitate it or send it back to the water is to bow, because it will politely bow right back, thus spilling the liquid.”

“Yeah, weird’s the right word for it,” David said. We took a moment to digest this newly discovered folklore. After a few minutes, David said, “What do you want to do for dinner?”

“Duh. Sushi,” I said. “Thanks to all this research, I’m totally craving kappamaki.”