Is that a skunk in your pocket? 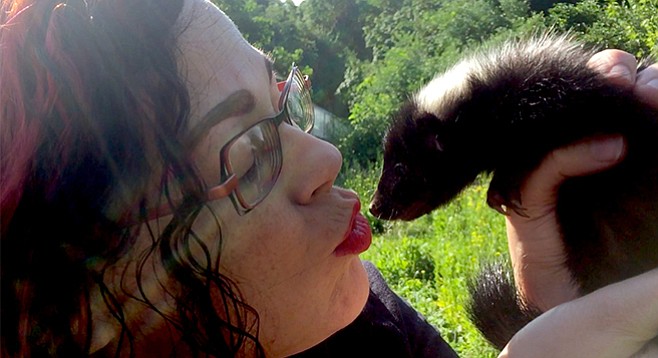 The three hours went by like a time-lapse movie: people appeared and disappeared; the drink in my hand was full, empty, and mysteriously filled again. It was the reception party for David’s annual photographic art exhibition on the island of Martha’s Vineyard, and as wonderful as it was to greet old friends and stand by my man’s side as his newest work was praised, the bulk of my attention was elsewhere, laser-focused on the possibility that I might soon get to touch a baby skunk.

It was an Instagram post that tipped me off. My friend Jenifer, a mosaic artist who splits her time between New Orleans and the Vineyard, shared the image. At first glance, it appeared to simply be an artistic shot of someone watering a garden: at the center of the image was a man’s hand around a purple nozzle affixed to a hose, the spray of the water glistening in the sunlight against a backdrop of green. But then, just to the left side of the frame, I noticed the fuzzy black and white head of the baby skunk, along with an itty-bitty paw, poking out of the man’s pocket. The description read, “Farmer Bob with an orphaned baby skunk in his pocket.”

After I blasted her with urgent text messages, Jen informed me that Farmer Bob was the guy who ran Fiddlehead, a small farm attached to a ramshackle but quaint store known for its fresh produce and other artisanal sundries, such as bread, cheese, and pies. I was familiar with the place — David’s father had been talking about introducing us to this very same Bob for a couple of days. I’d put it off, and now I was kicking myself. The earliest we could get there was the day after David’s show, which would be two whole days since Jen posted the photo. What were the chances the skunk would still be in Farmer Bob’s pocket?

I couldn’t hide my devastation when we arrived to greet Bob, just to discover he was skunkless. “Holding a baby skunk is on my bucket list,” I said. Bob shot David an Is she for real? look, and David assured him of my sincerity. Even without the skunk, Bob turned out to be a pleasant fellow — we discussed everything from the gluten-free craze to politics and his column in a Nicaraguan paper. Eventually, and as tactfully as I could, I nudged our chat back to the skunk.

Bob explained how he’d come across the orphaned kit, and how he’d nursed him back to health. He named him Sweet William, after the flower. Sweet William is the seventh skunk Bob has rescued. When I asked him why he went to the trouble, especially when so many of his fellow islanders consider the animals to be pests, Bob explained that it was a sort of reparation. “I used to trap and kill raccoons and skunks. I was trapping at least one a day. They were a nuisance, digging up the garden and wreaking havoc. But then one day I woke up and thought, ‘Starting my day by drowning a small animal is fucked up. So what if they wreak havoc?’ I thought, ‘Let them wreak havoc.’”

Bob said he couldn’t make any promises, that it was up to the skunk if he wanted to come out from under his house again, but that it was likely Sweet William would soon emerge, as the kit loved the chicken and cheese his rescuer provided. He gave me his number and said I could call in the morning to see if young William was in.

I called first thing the next morning and spoke to one of the young cashiers. “It’s the crazy lady who wants to touch a skunk, any luck?” He told me, in his Russian lilt, that the skunk had made a brief appearance that morning, but had escaped back under the house. When I hung up the phone, I turned my attention to managing my expectations. Maybe I shouldn’t have gotten my hopes up. For fear of being crushed yet again, I didn’t bother to call the next day. I worried that maybe I had come on too strong about wanting to meet the skunk, and imagined that Farmer Bob was telling his employees to give me the brush off.

Jenifer came to my rescue. Apparently, she knew Bob well, and had called him for me, then reported via text, “Hooray! The skunk returned! But is at home today resting, will probably be at Fiddlehead mañana.”

I arrived at Fiddlehead at 8 a.m. the next morning, a full five days after seeing Jen’s photo. I found Bob by the peaches, and my eyes went to his shorts. “Do you have it?” I said, trying not to sound as desperate as I felt. Bob nodded casually, and put a hand in his left pocket. I held my breath as he fished around in there, wondering if the whole thing had been a ruse, but then I saw the flash of fur. Bob got a hold of the scruff of Sweet William’s neck, and lifted him up like a puppy. He brought him to his face and when Bob rubbed his nose against the fuzzy white stripe that ran down the tiny marsupial’s forehead, I forgot how to close my mouth. Somehow, I managed to form the four most important words in the universe: “Can I hold it?”

When Farmer Bob lifted Sweet William to hand him over to me, I could see the kit’s soft, round baby potbelly, and the black pads on his tiny paws. For fear of freaking out the farmer, I did my best to maintain my composure when I brought the warm, fluffy black and white creature to my chest. “He’s so soft,” I said. “And sweet. Aww, he’s tired,” I added, when Sweet William tried to bury his head beneath my shirt. I could have held him all day. All week. All year. But Farmer Bob had work to attend to, so I eventually, reluctantly, relinquished the little stinker.

As we drove away, I didn’t even care that my face was about to go numb from smiling so hard. My elation must have been contagious, because David, too, was smiling. “Satisfied?” he said.

“Actually, I was just thinking about the next item on my list,” I said. “But we’re going to need a bigger pocket.”