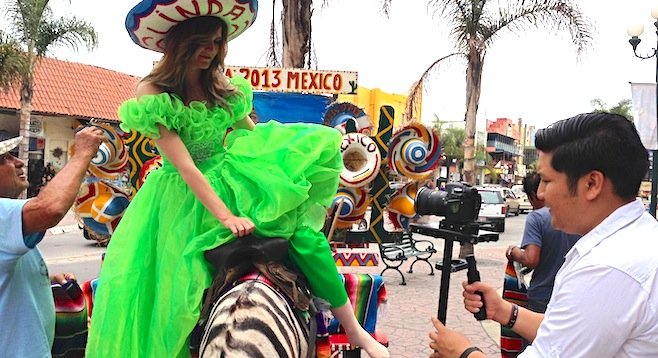 Terri on a zonkey

Sometimes I forget that a mere 15 miles away from downtown San Diego is a-whole-nother country, with its own customs and laws that, despite their close proximity to America, are light years away from those to which we Americans are accustomed. So if you, hypothetically speaking, were to cross the border heading north and bust past two checkpoints and then run a stop sign, it is not inconceivable that you’d go down in a hail of gunfire emanating from the U.S. Border Patrol, the NSA, or whoever it is these days who mans those absurdly high fences.

But while heading south, when my father did exactly that — bypassed the checkpoints and failed to stop at a giant red-and-white ALTO despite the super-high speed bump he sped over, which caused every set of teeth in the car to clatter from the jolt — the Mexican military or Tijuana cops, or whoever they’ve got manning their side of the fence, didn’t seem concerned. “Shit, Dad,” I said. “What are you doing running stop signs? Those are guns they’re holding over there.”

“I didn’t see it, I swear,” Dad said, giggling nervously and smiling a sheepish smile. “Everything’s completely different since my last visit,” he said. “It’s tough to tell which way to go.” In his defense, there had been a lot of construction and re-routing at the world’s busiest border crossing, and it had been a while since my father’s last visit to the Tijuana orphanage at which he used to volunteer.

I polled the backseat. “Is everyone okay back there?” David, Terri, and Remel all nodded. “Okay then, it doesn’t look like we’re being followed. I smiled and shook my head and then looked down at the printed email in my hands. “Sorry I snapped at you, Daddy. Thanks again for driving us down here. We’re headed to the corner of Fifth and Revolución.”

A friend had advised me to not refer to our day-trip as “a shooting in TJ,” but that’s what we were doing, for Art Pulse TV, a show that covers the arts in the region, which means San Diego County and Baja. Because this was our first shoot in Mexico, I wanted the team to travel together. But not everyone and our equipment would fit in my Mini or Remel’s two-seater sports car or Terri’s Car 2 Go, so I took my father up on a prior generic offer to “lend a hand” and asked him if he’d squeeze us all in his Camry and drive us into Mexico. That probably wasn’t what he’d had in mind when he’d said, “Let me know if there’s anything I can do to help you out,” but Dad, in his generosity and willingness for adventure, only hesitated for the briefest of moments before saying yes. 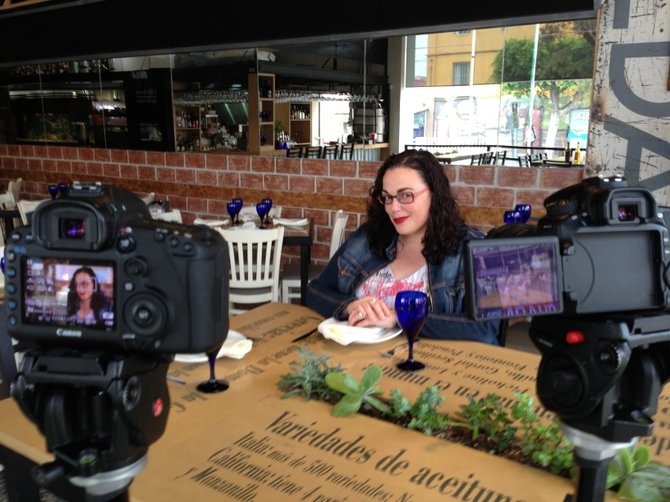 Terri and I were cohosting from location at El Colegio, one of chef Miguel Guerrero’s restaurants (he’s the guy who is said to have invented the whole Baja-Med movement). We were an hour into the shoot when a small delivery truck, converted into a rolling circus cage, appeared on the street and stopped at a red light in front of us. “Tiger!” I shouted, staring out the window in disbelief. The giant white cat (I’d never seen a white tiger in person) was pacing back and forth within the small, disorienting confines of its mobile domicile. Dad was quick to act — he ran outside with his phone to get pics and video. 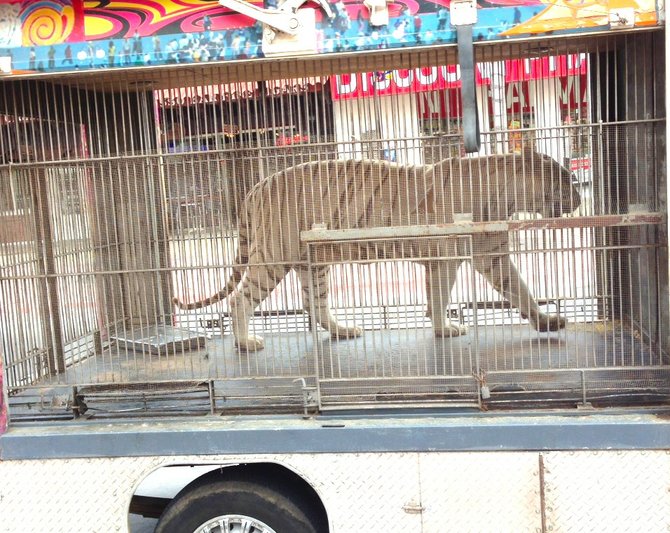 In the time it takes a traffic light to change, my father was re-entering the restaurant, grinning with the glee of a boy on his first visit to the circus. “Can you believe that?” he laughed. “Anything can happen in TJ! I forgot what an adventure it is just being here.”

But it was only a few hours later that I found myself thinking, I forgot what an adventure it is just trying to get out of here. I’d heard of the SENTRI pass, which takes around $120 and a bunch of paperwork to get, but I hadn’t gotten around to applying for one. Nor had my father, so we were stuck in the long line of cars waiting to get into the States.

We purchased churros (and were ripped off by a guy who could only make change in pesos) and then apologized profusely to my father when we remembered how messy those things are to eat. We were recapping the events of the day, chatting about the tiger and the zonkey that Terri had gotten to sit on when Dad suddenly snapped, “What the…? Get off of there!” at a guy who appeared out of nowhere and had begun cleaning the windshield on my side of the car. Suddenly, my window began to open and Dad was grousing louder at the man, his Brooklyn attitude bubbling to the surface.

“What are you doing?” I shrieked, holding my finger on the switch so my window would close back up. “You’re going to curse at a guy through my open window? If you piss him off, who’s within his reach? I’ll tell you who — your daughter.” Dad laughed, and I immediately felt stupid for my conniption fit. I wasn’t really worried that the poor guy with the squeegee was going to hurt me, but I saw no point in picking an argument with someone with a bucket and a stick in his hand while we were all trapped in a mostly-parked car, especially when mine was the only open window. 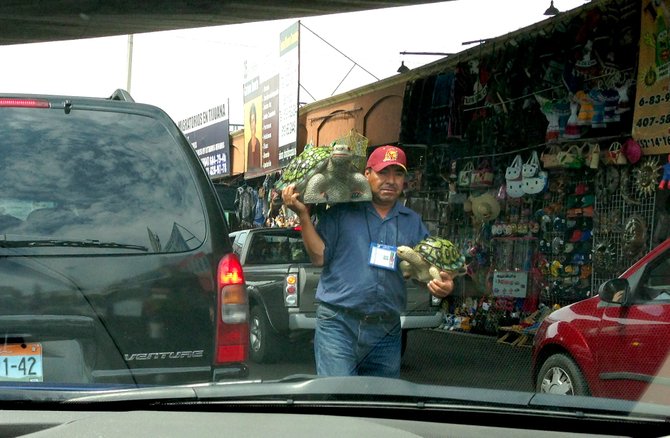 “I want that turtle,” Terri said from the back. “And that glittery Guadalupe. And that bald eagle.”

“That one?” Dad said, extending his arm and index finger to point at a collection of statues lining the right side of the road. As soon as my father made this gesture, purveyors of purses, ceramics, oversized crucifixes, and all kinds of border tchotchkes pounced upon our vehicle, and we spent the next minute firmly shaking our heads to discourage their persistence. From that moment on, we knew not to point.

“I’m ready to be in America,” Terri said, mostly because she’d been stuck in the middle of the backseat for two hours.

“We’re almost there,” I said. “Look, I can see the gates.” I usually walk across the border, so it wasn’t until we drew closer in the car that I realized what else had changed. There were a hilariously large number of cameras in every direction we looked. Some low, some high, some eye level. As we inched forward, it felt like we were going through some kind of camera car wash. 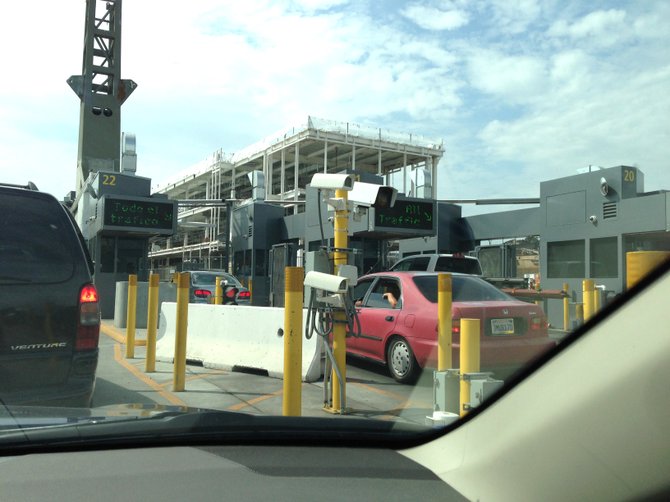 About to go through the camera car wash

“All eyes on us,” I said, mostly to diffuse the weird tension that such an onslaught of security can create. After we’d been approved (by a glaring border agent whose curtness offended my father so much he swore he’d write letters), we were back on the open road. “Thanks again for driving, Dad,” I said.

“Are you kidding me?” he said. “It was my pleasure. I’d forgotten how fun TJ could be.”