Inner Fire Dragon (A Woman About to Turn 40) 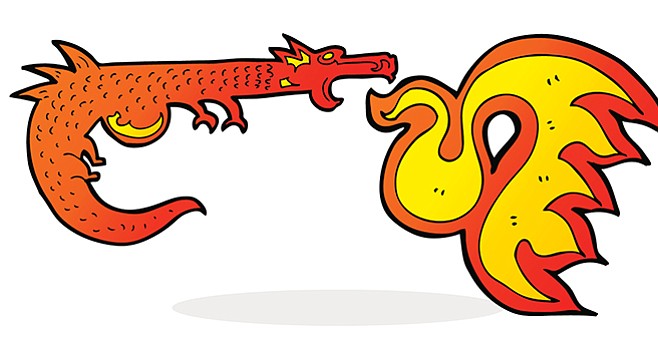 I was a Bicentennial Baby, born a few months after the nation’s 200th birthday. Half a world away, 1976 held a different significance — it was the year of the Dragon, the only magical creature of the 12 in the Chinese zodiac. Personally, I think astrology is hogwash. But my skepticism hasn’t stopped me from identifying with my Eastern sigil and wanting to embody its promise of a powerful personality, one the ancients describe as “confident, intelligent, ambitious, and straightforward.” Apparently, I’m not just any dragon, but a Fire Dragon — a particularly bold version of the fierce flying reptile that the zodiac sees once every 60 years. Bicentennials and star charts aside, my current preoccupation with my birth year has to do with the fact that this is the year I turn 40.

Memories of my father’s 40th birthday party are still clear in my mind. It was 1989, and I was only four months away from becoming a teenager. My mother enthusiastically embraced the “Over the Hill” theme. All the napkins and plates bore the phrase, which was also scrawled in silver pen on most of the black balloons. Mom even bought Dad a cane — a symbol that was easy for him to laugh off, seeing as every day after work he was either playing racquetball or in an aerobics class. As a kid, when the idea of driving was still a distant dream, anyone over 20 was an official grown-up, and anyone over 40 was ancient.

Ten years ago in this column, I penned my thoughts on turning 30: “I can understand the whole not wanting to get old and face mortality thing, but what I fail to grasp — even now, mere days away from my 30th birthday — is why so many people choose to be dragged through life snarling and biting rather than opting to stroll, comfortably and confidently, toward the inevitable. This is especially frustrating when those people are young and healthy, and their chief concern is not as much about getting older as it is about looking older.”

I was ecstatic to be entering my 30s, eager to keep smiling my way toward laugh lines. My father had always told me the 30s was the best decade for women. He also said that all women went crazy in their 40s. Many times, over and over throughout my adolescence, and into my adulthood, like a mantra, whenever a woman’s age was mentioned, he’d recite some version of that sentiment. Internalizing my father’s doctrine, I expected my 30s would be excellent, and I tried not to think past that. Over time, Dad’s view of a woman’s “best years” narrowed even further. Just yesterday, when I told him I was contemplating my impending birthday, he said, “Thirty-five to 40 is really the golden age for women.” When I asked what he thought happens to women after 40, he laughed and said, “They turn,” a term that, moments before, he’d joked was akin to milk spoiling.

I’d be lying if I said Dad’s view of women and age didn’t bother me, but my indignation was somewhat mitigated by his equally limiting view of men and age. For the guys, he’d narrowed the “best” to one solitary year: 33. But then, he quickly pivoted to tell me about two women he knows who are in their 90s, who’d each recently claimed to him that their 70s had been their best decade. I reminded him about another one of his mantras: “May the rest of your life be the best of your life.”

When I turned 39, I joked to friends that I’d be spending the entire year planning my next birthday party the way most people plan a wedding. I envisioned an awe-inspiring affair, something to top my 30th birthday party, which was epic, down to the invitations (actual statues mailed to a guest list of 30 people). But now, as I’m just beginning to see September peeking at me from the far side of summer, I’m starting to realize a big to-do is not what I want. I’m realizing that, while 30 was about celebration, 40 is about reflection.

It shouldn’t be different than any other year, but milestones make us take stock. How far have you traveled? How much further is it to the end of the road? What have you seen along the way? What are you still hoping to see? Milestones make you measure. You compare yourself to anyone the same age or younger, and compare your accomplishments to that old sketch of the future that was drawn by a younger version of you. You evaluate, quantify, and determine your level of “success.” Maybe you freak out and beat yourself up for not “doing more.” Maybe you’re grateful — that you made it this far, that you enjoyed the ups and survived the downs. Then you talk to someone older and they laugh and shake their head because, “Seriously? Forty isn’t old.”

When I turned 30, there was no way to know what joys and tragedies the next ten years had in store. Getting married, losing a home, making a TV show, winning an Emmy, losing loved ones, struggling with depression, traveling the world, publishing a book. And a million moments in between. And on the other side of it all, here I sit, with silver strands appearing along my hairline, as yellow on the edge of a leaf, signaling my own autumn. Here, now, on the precipice of 40, I understand that when it comes to women and age, my father is wrong.

Maybe this perception of women going “crazy” in their 40s has more to do with the fact that once she reaches 40, a woman finally realizes that life is too damn short to choose being agreeable over being yourself. So, instead of showing off with a party aimed at entertaining others, I’m going to spend this birthday getting in touch with my inner Fire Dragon.