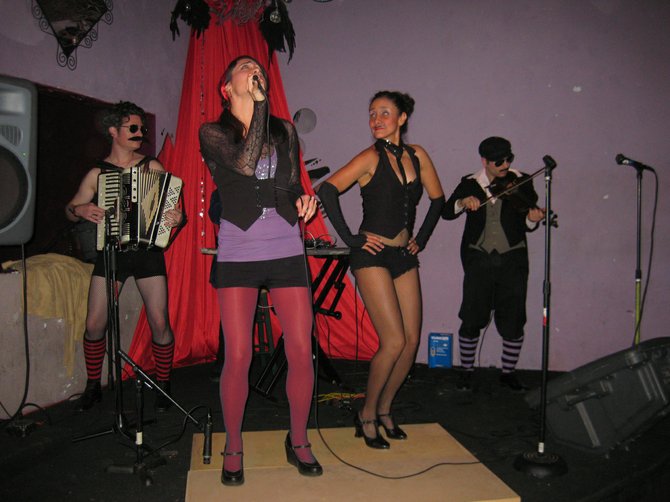 Ah, good taste, what a dreadful thing! Taste is the enemy of creativeness. — Pablo Picasso

I mustered the energy to lift my head from the spot on the wall that had been holding it up and followed my party to a table. Sunday brunch at the Mission with Jacob and Laura was becoming a habit, but this morning I was feeble from three consecutive nights of partying. A few sips into my second cup of coffee, the fog began to clear.

As I continued to wake up, I became aware that Laura was explaining her iPhone app, BeerChooser, to David. I waited until there was a break in their conversation before blurting, “You guys want to go to a flasher party tonight? Points for creativity — nudity is boring — and the best flasher wins a hundred bucks.”

“Ooh, that could be fun,” Laura said. She turned to Jacob. “We could do that thing we’ve been wanting to do.” Jacob nodded and smiled while David and I waited for enlightenment. “Our friend had this idea to Bedazzle the armpit stains on old shirts,” Laura explained. I had no doubt she had a glue gun and a drawer full of dazzle just waiting to be used.

“Leave it to you creative freaks to come up with some cool idea,” I said. Until then, participation in the contest hadn’t even occurred to me; I just thought it would be fun to go and watch what other people came up with. It didn’t surprise me that Laura and Jacob were all about contributing — they’re the kind of people who make things. Laura makes wallets and jewelry “upcycled” from vintage suits and neckties that she sells on Etsy; and even though he works at a brewery, Jacob makes his own beer.

I envy my friends’ enthusiasm and ingenuity. I was reminded of the tiny terrariums they’d recently built inside of light bulbs and Laura’s astonishing self-made Inspector Gadget Halloween costume. Most of my friends are “do-it-yourselfers.” The only thing I insist on doing myself is makeup. This is probably why I’m drawn to imaginative people, those who fish ideas from the oceans of their minds and then reel them in to form some kind of tangible reality.

I’d heard of the event when a friend, DJ and event organizer Wolfgang Von Cope, tagged me in the flier he posted on Facebook. Whenever I am tasked to describe Wolfgang and his friends, I use the term “circus folk,” often followed by “No, really, like they actually perform in circuses and stuff.”

This time, when our friends asked about the people behind the event, David attempted a description. “Think nineteen-teens vaudeville,” he said.

“She came up with that term when we encountered a troupe of transient burlesque people in New Orleans,” Jacob explained.

Hours later, on the refreshing side of a nap, shower, and dinner, I arrived at the Kava Lounge, an ideal hipstrel venue. A low stage was set up in the corner beside the towering DJ booth against the wall opposite the bar. Seated behind a table on the stage, Wolfgang — his shaggy mohawk tucked inside a bowler hat — was fiddling with his laptop.

Laura and Jacob were unable to demonstrate their dazzles — they’d forgotten they’d committed to do quiz night at Shakespeare’s Pub with other friends. This was unfortunate, as it seemed the majority of flasher-partygoers shared my voyeuristic approach to the evening. But though they were few, the handful of people prepared to flash had more than made up for the rest of us.

Circus sideshow seemed to be a theme. Like the Illustrated Man, one guy peeled open his long black coat to reveal a full-body tattoo suit; another couple had dressed as Siamese twins, flashing their connected “flesh,” which they’d fashioned from silk slips.

“What is this music? I love it,” I said to Wolfgang when he came to greet us.

“It’s called electro-swing, it’s really big in Europe right now,” he explained. “Basically, where acid jazz was all about sampling songs from the ’60s, electro-swing samples older songs, from the ’20s to the ’40s.”

“It’s so happy-sounding,” I said, bouncing to the beat as we spoke. Wolfgang explained how a new program made it easier for DJs to sync beats to the Old World style of music that had, until recently, been difficult to mix. He excused himself and returned to his corner to prepare for the show.

According to the flier, the group was called Orkastra Mustachio, comprising a violinist, tap dancer, singer, and accordionist/jaw harpist. The lattermost, who introduced himself as a gypsy named Bogdan Grul, wore a large fake mustache, mirrored aviator-style sunglasses, red-and-black-striped knee socks over fishnet stockings, black shorts, and a red tank top. David leaned over and said, “He looks like the love child of the strongman from Ringling Brothers and Super Mario.”

The two women removed their coats to reveal frilly hotpants, tuxedo vests, and fishnet stockings. They were both dark-haired, slender, and lovely, and they each sported a hand-drawn pencil mustache. The violinist, Misha Borisovski, was dressed like a 1920s-era newsboy.

As Bogdan worked the piano accordion and Misha played the violin, Wolfgang kept the energy pumping with electronic drum and bass. After a few songs, Keziah the tap dancer stepped forward onto a wooden board and Bogdan abandoned his accordion for a microphone. The crowd watched in awe as the two performed a “beatbox/tap” routine with Bogdan beatboxing into the mic and Keziah mimicking his complex syncopated sounds with her tap shoes on the board.

Between performances, flashers were asked to come forward and show their stuff. The most surprising was the guy who had been standing quietly by the door all night, checking IDs and giving hand stamps. He wore a black fedora on his head and a distressed brown leather coat over pants…or at least that’s what we were led to believe. When he stepped forward and opened his coat, we were offered a quick glimpse of a full-body fishnet suit covered only by striped orange-and-black hotpants. The “pants” I’d thought he was wearing were actually velvet pant legs tied to each thigh with a black string.

“That would have been funny, but I don’t think anything would have beaten bedazzled pits,” I said. I turned my gaze back to the stage, where the hipstrels were doing everything short of saying “Step right up” to draw in their adoring audience.