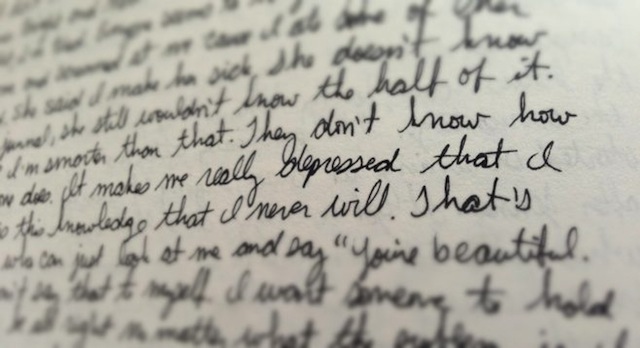 A page from my journal

“Why do you think it’s always boys and never girls who go on these mass-shooting rampages?” I asked David, mostly rhetorically, because I already had my answer. “I think I know why; shooters are mostly suicidal teens, right? Suicidal tendencies go hand-in-hand with depression, but there’s one major difference between girls and boys — girls want to be liked and admired, while boys want to be respected and feared. But the underlying goal is the same, and that’s to drastically change what they think other people think of them.”

David nodded at my armchair-psychologist hypothesis and I nodded back. Then I un-paused the NOVA episode we’d been watching, titled “Mind of a Rampage Killer.” The PBS science show is one of the few programs we have set to record on our DVR. While I enjoy hearing scientific speculation about life in ancient Egypt and learning research-based information such as what’s really happening beneath the surface of the earth during major quakes, it’s the stories that reveal secrets about our bodies and minds that fascinate me most.

As we continued to watch, we saw brain scans of “depressed, suicidal” people compared with those of “healthy” people. The reporter narrated, “Researchers say 60 percent of rampage-shooters are suicidal before the carnage.”

“Yeah, but that’s no indicator,” I said, more to the TV than to David. “I mean, every teen is depressed and has suicidal thoughts. It’s part of being a teenager.”

This time, it was David who paused the program. He turned to me with a serious look. “No, they don’t,” he said and searched my face for I don’t know what. “Are you joking, or do you really think that?”

“Okay, maybe not everyone wants to kill themselves, but teen years are hard. Are you telling me you were never depressed as a teen?”

“Did you have a lot of friends?”

“And you never had thoughts about what it would be like if you died, like in the movie Heathers, how people always talked about how much they liked and admired the girl who committed suicide? How they all claimed to be her friend, even the people who were mean to her?”

“No.” Rather than looking annoyed at me for not accepting his answer at face value (as he might usually do in such an exchange), David’s face was a study in concern. “Did you ever want to kill yourself?”

I was tempted to crack a joke; at least that would provide an excuse for the nervous smile that had crept its way onto my face. David, aware that I can’t bear the weight of a heavy silence for long, waited me out, as indefatigable as a mountain.

“Let me make one thing clear,” I said, choosing my words carefully. “I knew I’d never actually attempt to kill myself — I don’t think it’s in my chemical makeup. But…yeah, I thought about it. Mostly about how people would react. Like, maybe they’d like me better or say nice things about me, you know, if I were dead. It’s not a big deal; I think a lot of people feel that way, especially kids.”

David’s face was so damned listen-y that my eyes started to leak. I have a tough time expressing honest feelings without crying, especially when I’m talking to someone who appears to actually give a shit; it’s a thing. David wasn’t surprised or bothered by my tears because he’s familiar with this aspect of my being.

“I thought I was a typical teenager, you know? Happy on the outside, miserable on the inside,” I explained as I wiped at my face with my shirtsleeves. “That’s what I’m talking about with the difference between girls and boys — boys blame others for their misery. I blamed myself. I didn’t want anyone to realize I was so unhappy because that would be like some kind of failure. My dad was always saying you choose how you feel. I really hated myself, and when people at school made fun of me, it just reaffirmed what I already felt I knew — that I was worthless.”

I gestured at the television with one hand and wiped both my cheeks with the other. “I was like that one kid they just talked about, the one who nobody realized was depressed, only I never had any violent tendencies — I didn’t want to hurt anyone. But I did want to punish them somehow, and I thought — not a lot, but sometimes — that if I killed myself, it would make them all feel bad for not being nicer to me.”

I told David about some of my friends in school, girls who’d attempted suicide. I had been envious of the attention they received, but not enough to go playing with razors or pills. “My friends always came to me when they were hurting,” I said. “Funny, I never let on to any of them that I was so sad. I always wanted to be entertaining and fun. I just wanted everyone to like me.”

I took a deep breath and let it out slowly. My eyes were drying. “You know,” I said to David, whose attention had, at some point during my monologue, gone from aggravating to encouraging. “My parents found one of my journals. I used to write poetry; a lot of it was pretty bleak. But when I found out they were reading it, I was so angry.”

I laughed, less from humor than from realization. “But now, looking back, I admit that it felt good when they showed their concern. I was all pissed that they wanted me to see a shrink, and I only went once — that woman was crazier than I could ever be — but just the fact that they got all up in my shit, as indignant and sullen as I acted, on some level I wouldn’t admit to at the time, it made me feel loved.”