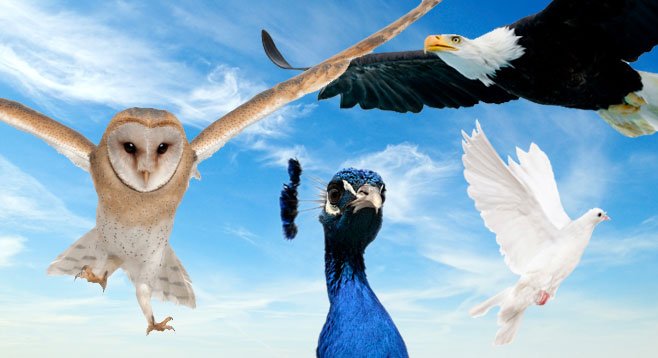 The nervousness I felt was rote — anxiety is my body’s automatic response when I’m awaiting test results of any kind, be they medical or scholastic. This one was called a “personality assessment.” It was a “basis for evaluation,” an examination of sorts, and the root of that — “exam” — is defined as a test of knowledge or ability. No matter the terminology (pass or fail, positive or negative, high or low), there’s only one way my brain reads it — good or bad. And I don’t ever want to be labeled as bad.

Major corporations with hordes of middle managers are all about these tests. A friend who works at a mammoth phone company introduced me to the hilariously named D.O.P.E. assessment her bosses have sanctioned. It stands for Dove, Owl, Peacock, Eagle. After taking this test and administering it to her team, my friend insisted she was a Dove — peaceful loyal, friendly, change-avoiding; but her husband maintained that she was, in fact, an Eagle — bold, decisive, stubborn, and insensitive to other people’s needs. I shared an eye-roll with David and later joked that I thought the whole concept was for the birds.

My sister Jane works for Big Pharma. As with most big corporations, Jane’s employers implement the Myers-Briggs Type Indicator, an old test based on Carl Jung’s theory that there are four basic psychological functions through which humans operate. Because it’s couched in generalizations yet leaves little room for the immeasurable categories between its four declared dichotomies, experts in the fields of science and psychology view the efficacy of the Myers-Briggs method as being on par with astrology.

Aside from a handful of silly, generic quizzes online, I’d never take a personality test. This one — sent to me by a colleague at one of the organizations I work with — took roughly seven minutes to complete. As I understood it, the test was being administered as part of an overarching strategy to implement some kind of team-building, communication something-or-other. Seeing as I navel-gaze for a living, I wasn’t expecting to learn anything new about myself, especially from taking a test that asked participants to provide their own opinions of themselves.

“Barbarella is aggressive and confident,” I read the first line aloud to David when the email finally came through. “Yeah, no shit,” I added. David smiled and nodded. “Oh, this is funny,” I said. “It says I’m a ‘team player.’” David guffawed. “That’s probably because of the one I lied on.”

There had been two questions I’d lied on — the one where I’d indicated I was a team player, and another for which I’d selected “optimist” as the word that most described me among the four provided. I wanted to pass this test, and no matter who you’re working with, not being a team player is a definite “fail.” The optimism thing, well, I realized halfway through how terrible I might come across if I didn’t soften my image somewhere.

I skimmed through the summary — an overview of myself as I saw myself. According to the report, I’m opinionated, I like deadlines, I prefer to make decisions quickly, I lack patience for “slower acting people,” blah blah blah, nothing new here.

“Oh, wait. Hell to the no, this one’s way off,” I said. “Listen — ‘Barbarella may present information in a form that cannot be easily understood by some people.’ That’s bullshit, right? I’m communicative to a fault. Other people beat around the bush, whereas I hack right through it with a machete. I spell things out in no uncertain terms, so this conclusion is just wrong. But this next line — ha! ‘She may lose interest in what others are saying if they ramble and don’t speak to the point.’ That’s spot-on.”

I was about to start kvetching about the pointlessness of the report, but then I got to the next page. Here were recommendations for how others could best communicate with me. “I like this,” I said as I skimmed it over. “I should hand this out to everyone with whom I begin a project. Or just…anyone.”

There was a page of “Dos” and a page of “Don’ts” regarding how people should approach me. I cherry-picked some of each to read aloud to a casually amused David. “‘Do come prepared; Don’t ask rhetorical or useless questions’ — I love that one. There are few things more irritating to me than unprepared people and stupid questions. ‘Do put projects in writing with deadlines; Don’t ramble on or waste her time.’ Ha! That’s my favorite. ‘Do verify that the message was heard; Don’t try to build personal relationships.’ Wait — ouch. Not that one, right?” I looked at David, pleading silently for his agreement. “I love having personal relationships with everyone I work with. Right?” I’d have to ponder that one.

Once I got that the assessment was to be used as a sort of guide for people who interact with me, to help them get the best results, the more I started to really dig the whole personality-test concept. There were even some recommendations for how I might interact with others to be more effective. Things like, “Barbarella needs to adjust her intensity to match the situation,” and “display empathy for people who approach life differently than she does.” It also said I need more vacations, and I’m not going to argue with that.

There were also some hard truths. Things I knew on some level but rarely considered. Such as being opinionated to the point of obnoxiousness, and my difficulty balancing family and work.

“It says I see myself as assertive but that others see me as ‘aggressive’ and ‘nervy,’” I said. David seemed to be avoiding my eyes. “It says, under extreme pressure, I can be perceived as ‘abrasive, controlling, arbitrary, and opinionated.’ Beh-beh? What do you think?”

David finally met my gaze. “I think you already know all of this stuff. And that you aren’t really bothered to be called on it. Just embrace it. It’s you. And I love you.”

“True,” I said. “Seriously, though, how awesome would it be if everyone had to read this before meeting with me? I’d never have to sit through a tedious, pointless update again. Just the information I need to do what I must, and then back to my cave to get shit done.”

David laughed. “I’d say that’s evidence enough that the science behind the assessment is pretty solid.”