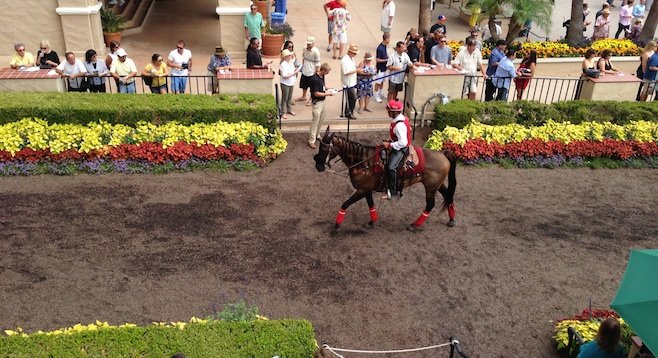 I took a sip of my drink and tried not to make a face. A splash of whiskey swimming in a deep pond of mint liqueur and ginger ale was not what I expected when I ordered a mint julep. This wretched, overpriced cousin of a classic would never go over in New Orleans, I thought. But I’m not standing on this terrace in the blazing sun for the drinks, I reminded myself as I looked down at the blossom-bedecked corral below. I was here for the horses.

The San Diego Press Club, for which I serve as a board member, hosts an annual event at the Del Mar Racetrack. Each year, the club reserves a private terrace overlooking the saddling paddock, where people can get a good look at the horses prior to each race before they’re led to the track. The horses were gorgeous to behold, but my eyes were mostly on the people. I’d heard the races are as much about fashion as they are about gambling. But, though I spotted an occasional impractical heel, most everyone was dressed down — men in khaki or pastel-colored shorts, women in shorts or sundresses, lots of T-shirts all around.

Barbarella in her red, feather-ornamented, wide-rimmed, woolen hat, and Heather in her straw cloche.

“Oh, I see, you can either choose one to win, one to place, or one to show,” said Heather, who looked cute and comfortable in her straw cloche. Heather had papers and booklets spread out on the table in front of her. Leave it to my schoolteacher-turned-administrator sister to insist on reading the “directions” before placing any bets. “See, you can do an Exacta, Quinella, or Trifecta,” she said, pointing to one of her papers, but all I could think about was how each of those words sounded like they’d been invented on the fly by New York Italian bookies. I imagined how these characters might look and took a moment to picture them in my mind’s eye, hawking for bets: “Get yo-ah exacta he-ah!”

Upon learning that I’d never been to the racetrack before, most of my friends responded with shock. “How can that be?” they wondered aloud. I told them, “I don’t know,” but the real answer was, I never had any interest — and this coming from a woman with an extensive hat collection. When it came to selecting a hat to wear on this particularly warm and windless day, I chose poorly — a red, feather-ornamented, wide-rimmed, woolen hat that trapped the intensifying heat and suffocated my scalp.

The track was never enough of a draw simply as a venue at which to flash my fascinators — I can wear my feathers anywhere. My lack of interest had mostly to do with the fact that I don’t enjoy gambling. I’m one of those people who visits Vegas solely for the spectacle, without ever once dropping a coin in a slot. I don’t like to gamble because chances are I will lose, and when I do, it’ll put me in a foul mood. And no one wants that.

A few days before the Press Club party, for which I already had my tickets, I happened upon a compelling reason to avoid the track altogether when I read a news story about all the horses that have died at Del Mar this season. As I read about these 12 horses dead in the span of a few weeks — some put down after they broke their legs, another from a heart attack — I considered backing out. In the end, I realized that the Press Club’s terrace had already been paid for, and my being there or not wouldn’t make a difference, so I decided to take advantage of the affair to spend some time with my sister and see what all this horse-racing stuff was like.

While Heather was busy trying to make the most informed and practical bet possible, I found my friend Kris (who I know to be an animal lover) and asked her how she rationalized supporting the sport in light of all those horse deaths.

“Being an animal is different than being a human — you can’t personify that,” Kris said. “I agree that there could be more regulations to help prevent injuries, but this idea that horses shouldn’t run — that they should be left in a pasture and never go on a race — that would be robbing them of something they love to do. Horses love to run. And they don’t have to if they don’t want to, you’ll see. As they’re leading them out, a horse can decide it doesn’t want to run.”

Someone else, having overheard our discussion, piped in to explain that most owners and trainers go to great lengths to ensure their horses are healthy and happy, that “most of these horses have stylists, massage therapists, and veterinarians constantly catering to their every need.”

“Quick, tell me which bets you want me to place. I’m walking over there right now,” Heather said.

I glanced down at the paddock and spotted a horse that looked like a unicorn, with its silver-on-silver speckles. “That one,” I said. “Number 4.”

When Number 4 came in second, I was ecstatic when I turned to Heather and said, “What did I win?”

“Well, nothing,” she said. “You told me you were betting to ‘win,’ not to ‘place.’ You only get something for second if you bet to ‘place.’”

“Oh. Well, I suck at this, don’t I,” I said. Heather was not in disagreement. “It’s like a scratch lottery ticket, but the difference between a scratch ticket is that you know it’s totally random. Here, you feel like you have some control — and you’re choosing a horse, and if you choose the wrong one, it’s all your fault. Whereas, with a scratch ticket, if you don’t get anything, you’re, like, That was fun, whatever.”

We returned to our seats and Heather began plotting her next bet with all the enthused concentration of her first one. I gulped down another sip of my “julep,” wiped at the wetness where my forehead met the wool of my hat, and wondered what the weather was like in New Orleans.