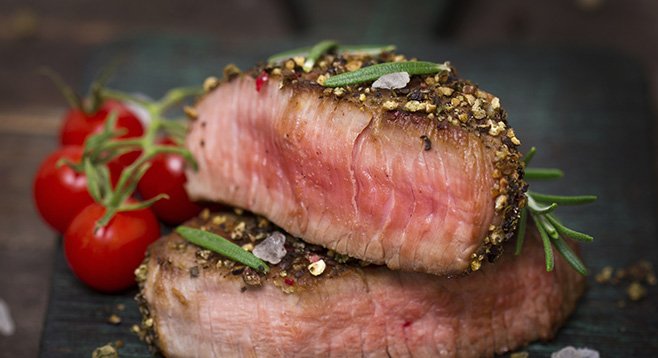 David’s phone chimed. Since he was driving, I grabbed it from the console to check the text. “It’s Cris. She says it’s BYOB and wants to know if she should pick up red or white. Doesn’t matter, right?” David agreed, so I texted back that we were cool with whatever. Then, chuckling, I said, “So, let me get this straight. We’re in ‘Beef, it’s what’s for dinner’ Texas, the steak capital of the world, and we’re going to a gluten-free, bring-your-own-booze restaurant with a couple of vegetarians who don’t drink?”

“I don’t think ‘gluten-free’ means it’s also a vegetarian place. Why don’t you check out the menu?” David suggested.

We were in Dallas for an exhibition of David’s photographic art at Cris Worley Fine Arts. On this, the night before his show, we were to dine with Cris, the gallerist, and a local university art professor who had asked David to speak to her class.

“I wouldn’t usually mind if we were going to a vegetarian restaurant,” I said as David pulled into the lot. “But for the few days we’re here, I’m reluctant to order anything but beef.” Steak is not normally my protein of choice — I could count on one hand the number of times I’d had it in the past year. But I often reminisce about the perfectly prepared and exquisitely flavored petite filet I had the last time we were in Dallas, and that was two years ago.

We were early, of course, so after David parked we stayed in the car for a bit with the air conditioning running while I perused the menu. “Okay, it’s gluten-free, but apparently meat-heavy. Buffalo tacos, Buffalo Bolognese, Buffalo nachos, burger, chicken, steak… Oh, no, I hope there’re enough veggie options for them. That would be tragically ironic, if, while trying to find a healthy dining place for her vegetarian guests, Cris accidentally selected a Paleocentric menu. Wait — never mind, there’s one vegetarian dish here. Also salmon and scallops, which adds a few more options if they turn out to be pescatarian.”

“They’re all adults, no one’s going to starve,” David said. “So if you’re done fretting over everything, let’s go ahead and go in.”

I nodded and followed him out of the car, but I hadn’t finished fretting. I wanted to order the steak, but I didn’t want to have to be apologetic about it. As we greeted Cris and the professor, who brought her husband along, I told myself my concern was for naught. Of all my vegetarian, pescatarian, vegan, and Paleo friends, only two had ever been rude about the differences between their food choices and mine. They were at opposite ends of the spectrum — one a vegan, the other Paleo — but they were alike enough in their apparent need to validate their preferences by condescending to those with dissimilar choices.

I recently caught myself doing exactly this to my poor sister. When she asked me to lunch at a certain sandwich shop, I launched into an explanation about the plastic compounds found in the bread and all the carcinogens in deli meat. I suddenly heard myself sounding like an asshole and said, “Sorry. Never mind. What I meant to say was, can we pick another place?”

When someone goes on about the presumed morality or health-worthiness of his or her food choices, I can’t help but think of tampons. Unless I ask you to detail all the reasons you have for putting or not putting a specific thing in your body, it’s safe to assume I’m not interested in hearing about it. I trust that my friends are capable of making their own decisions, and I expect the same in return.

These kinds of diet-related diatribes are fatiguing enough coming from a friend or family member, but they’re downright insufferable from a stranger. When David and I were on the plane ride home, I asked a flight attendant — a tall and slender, older white man with gray hair and wire-rimmed glasses — for a cup of coffee. When he asked how I took it, I said, “Cream and sugar, please — or artificial sweetener if you have it.”

“You mean rat poison?” Startled, I looked him in the face to see if I’d heard correctly. He was smiling down at me.

He bent at the waist, bringing his head a little closer to my level and repeated, “Rat poison?”

I looked to my left to see if David was getting any of this, but he had his earphones in, so I turned back to face the exceptionally inappropriate dude to my right. “Yes,” I said. “I’ll have the rat poison, please.”

I was livid, and relayed the encounter to David, who, upon hearing this, scrunched up his face and said, “That’s weird. And really inappropriate.”

Back at the restaurant, it was time to order. Everyone went around the table doing the usual, “What are you having?” The professor was pescatarian after all, so she was going to order the salmon. It was the seafood diablo for David, the veggie plate for the professor’s husband, and Cris was having a crab cake and avocado thing with a side of asparagus. I had kept my head down during this whole exchange until the professor said, “And you, Barbarella? What are you getting?”

I hesitated for the briefest moment and then answered, “Steak.” The professor nodded and looked back to the menu. And that was that. For the next hour or so, while I enjoyed my lovely serving of Texas beef and veggies, and while David and I shared the wine Cris had brought, the five of us spoke and laughed about art and life. For dessert, we all shared a damn fine slice of gluten- and rat-poison-free cake.