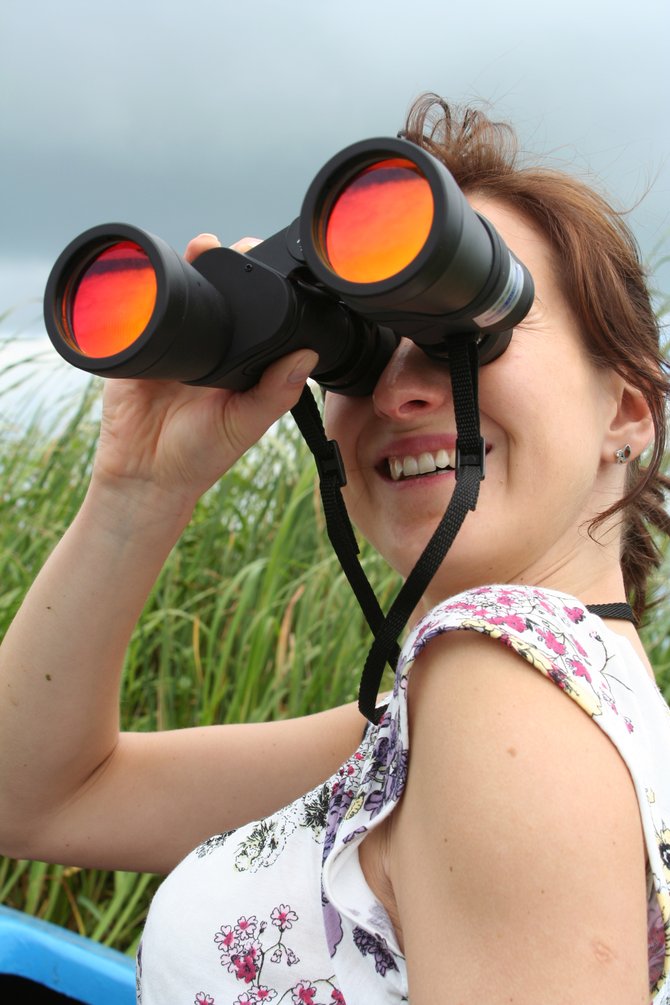 I’ve always been a bit of a voyeur. Not in a sexual fetishy way. I just have an innate curiosity about other people and how they live their lives. Shortly after we moved into our old place, David had gifted me with binoculars. I would occasionally look out over the street, into far-away windows, see people going about their days, and create my own narratives about their lives.

Where we used to live, it was an effort to survey my surroundings. I’d catch mildly interesting movement out the window, in the distance, and if I wanted a closer look, I’d need to interrupt whatever I was doing, go unearth my binoculars from a drawer in another room… it was a whole deal. But I’m no longer in a penthouse, where I could see all but none could see me – I’m in a fishbowl, as is every unit I face.

David and I opted to forego blinds in our kitchen/living area upstairs. I don’t care if others see us cooking, eating, and entertaining; blinds just obscure our view of the sunsets, the green trees, the birds: life. I save my privacy for downstairs, where we keep the blinds drawn in our bedroom and my office/den.

Still, it’s weird to be on the receiving end of ogling eyes. We’ll be sitting at our dining table for lunch and look up to realize that we’re the entertainment for a neighbor one unit over who’s having a cigarette break on her balcony. But this in-your-face living has its upside. For one, I haven’t needed binoculars since I moved in. Everything’s right there. There’s no way to avoid it, unless blinds are drawn.

All this up-close-and-personal has forced me to face a fact about myself – I have Gladys Kravitz Syndrome. Okay, maybe I’m not as nosy as the neighbor from Bewitched, but I do keep my nose to the window. I don’t watch reality television; I’d rather see what’s going on in a more immediate setting than New Jersey. Many of my neighbors have dogs – big dogs, the kind I like: Golden Retrievers, a Chocolate Lab, a Rottweiler, and more.

Usually, I just watch. But yesterday, I violated the Prime Directive by interfering with the subjects of my scientific observation. I was working on my laptop on the couch upstairs when I heard the unmistakable sound of one car coming into contact with another. I watched from my window as a woman attempted to park a large SUV in a narrow spot beside a silver sedan. After a few tries (one involving the graze against the sedan, a collision I caught the tail-end of), she gave up and parked in a different spot.

I watched as the woman examined her bumper, and then the side of the sedan where she’d hit it. I watched as she stepped back behind the two vehicles and gauged the size of the spaces. When it became clear she wasn’t planning to leave a note, I grabbed my iPhone and began snapping pictures: of her wiping her bumper with a cloth, walking around the cars, and then looking left and right to see if there were any witnesses. She forgot to look up. I was hardly inconspicuous, half-hanging out the window to get a clear shot of her license plate. If she had looked up, I would have waved and said, “Let me know if you need any paper for a note.”

When she disappeared into a residence off my radar, I bounded into action and created an email with a clear photo of the woman and both vehicles, her license plate number, and a detailed account of what I had witnessed. The email was to the property manager. “If you want to inform whoever owns that silver sedan of the responsible party for any damage there may be, there’s the info,” I wrote. I ended the note with, “Good thing to have a bitch reporter living in the complex, I’ll tell ya!”

Minutes later, I watched out my window as the property manager approached the cars, and snapped her own pictures. It occurred to me that I might take a photo of her taking photos and send it to her as a joke, but I realized that would be crossing the Creepy Line. So instead, I settled back onto the couch, grabbed my book, and picked up where I’d left off.