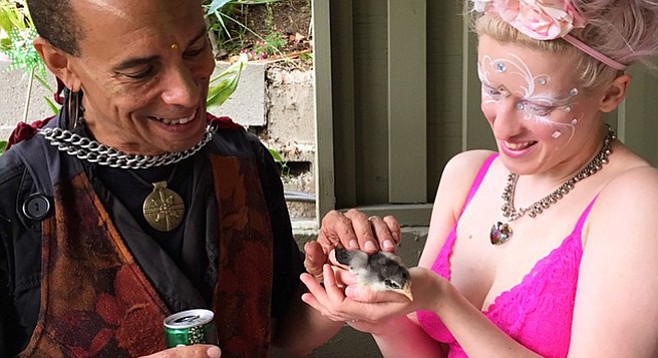 “Pastel attire is encouraged, children are not,” I read aloud. “Well, I don’t own anything pastel,” I reminded David. Secretly, I was relieved to know there wouldn’t be any kids at this party. Children — with all their cuteness, loudness, and need for constant attention — hog the spotlight.

I figured I could get away with forgoing the donning of delicate shades of yellow and pink so long as I kept with the overall theme, which was “Spring Garden Party.” To ensure this was noticed and appreciated, I was quick to greet each person at the garden gala and point out the stem-esque green of my shirt and the red silk roses that were affixed to my hair clip. “Get it? I’m a flower,” I said, though my forceful tone was more reminiscent of a Venus flytrap.

It had been a while since David and I were out of the house for a non-work-related function. Nearly two months had passed since we moved, and we were still winding our way around mountains of boxes. With all of our attention turned to juggling work-related projects, the chore of unpacking anything that wasn’t necessary for day-to-day life was bumped so hard to the back burner that it fell behind the proverbial stove, where it has remained since. When the Evite appeared, I seized the opportunity to take a break from the drudgery — not only work, but also the looming, endless task of settling in to our new apartment — and enjoy an afternoon with friends.

As usual, David and I were the first to arrive. Fortunately, our hosts Jane and Bill are close friends who understand my dysfunctional-but-functional relationship with time. Soothing classical music wafted through the air as Jane led us to the “champagne station,” an old bookcase filled with pink flowers, champagne chilling in buckets of ice, and neatly arranged green and pink cans of Perrier and La Croix. As she poured each of us a glass, Jane used her head to point out the “selfie wall,” a backdrop of white daisies and yellow and purple wildflowers she’d gathered from the canyon below. Jane would make a great doctor. I could already feel my general anxiety slipping into remission.

Before we took our first sip, Bill handed us each a sheet of paper containing the “Official Rules and Regulations” of the soiree. It began, “Spring Garden Party (‘SGP’) offers participants a chance to play one or more games and contests and earn raffle tickets for a chance to win select prizes in our SGP drawing.” There were eligibility rules and a section on “How to Enter.” Bill is an attorney, so this made sense. I quickly checked for any fine print, lest I enter into this contract lightly.

“I’m the SGP Potentate,” Bill announced. I had to look up the word to learn it meant “ruler or monarch.” He explained that guests would earn raffle tickets by partaking in certain activities, such as playing ping pong or Jenga, or, as the official paper stated by “completing a designated SGP contest such as Scavenger Hunt or Water Bucket.” Shawn and Kimberly arrived shortly after us. Eager participants to the core, they enthusiastically accepted Bill’s regulations and asked him how to go about competing in Scavenger Hunt and Water Bucket. Bill verbally listed a variety of plants (including artichoke, caper berry, eggplant, and blueberry bush), and said whoever found them all would receive a raffle ticket. Without hesitation, Kimberly began calling out plants as she made her way around the extensive backyard hillside that Jane spent her free time landscaping and cultivating.

“See these?” Bill held up two brightly colored plastic watering cans. “For Water Bucket, you go around the yard and water plants.”

Shawn grabbed a can and rushed to fill it from a nearby spigot. “How do you plan to police this? Is this all honor system?” Bill nodded. “Those are my two favorite words,” I said.

Bill smirked at me. “Because to you, ‘honor system’ means the same as ‘sucker system’?”

“Pretty much,” I said. “I mean, you’re keeping all the tickets right over there by the champagne station. What’s to keep me from just going and grabbing a few when you’re not looking? Or telling you I found all those plants, or that I watered a bunch of stuff?” Bill chuckled, lawyerly, and shrugged.

“We need to have a raffle at our next party, but add ‘Clean the Bathroom’ as one of the games,” David joked. Later, having forgotten about the rules, he was pleasantly surprised when Bill handed him a ticket for having enjoyed some ping pong.

I forgot about pretty much everything else in the world when Holly (author of Mommy, Me & My Chickens: An Urban Family’s Guide to Raising & Caring for Backyard Chickens) showed up with a cage full of fancy chicken chicks — fancy, because they’re the kind with long feathers. She encouraged everyone to handle the chicks because she was trying to get them used to people. If they were giving out tickets for that, I’d have cleaned up.

While playing with chicks, I took a moment to appreciate the incredible job Jane had done of transforming her deck and yard. Flower-laced hors d’oeuvres rested enticingly under fine white mesh domes. Wildflowers had been woven throughout the deck railing, and pink and yellow balloons were grouped together to make balloon blossoms. Just when I thought the day could not be any more magical, we were treated to a surprise performance by Tribal Baroque (an opera-singing, violin-playing duo). They’d rolled up on hand-decorated bicycles. The angelic girl was a flower fairy (with sparkling jewels on her painted face); and the mystical guy could best be described as a Buddhist Roman soldier. Trust me. Their ethereal, heartfelt performance brought tears to our eyes. After they’d finished and everyone was still buzzing from the energy of it all, I found myself again standing beside Bill. He handed me a ticket. “Here, that’s for being critical of guests,” he said.

I couldn’t remember having said anything particularly critical, but I’m known to quip, so I accepted my token. “I didn’t know that was one of the contests,” I said.

I didn’t win anything, but it felt good to have been granted a chance by the king. It occurred to me, as Bill called out numbers and handed out colorful and silly prizes, that I had had several opportunities to steal tickets. I mused over my sense of fairness and how that evolutionary imperative was probably holding me back somehow. But I shrugged off the notion and went back to enjoying one of the loveliest parties I’d been to in a long time.