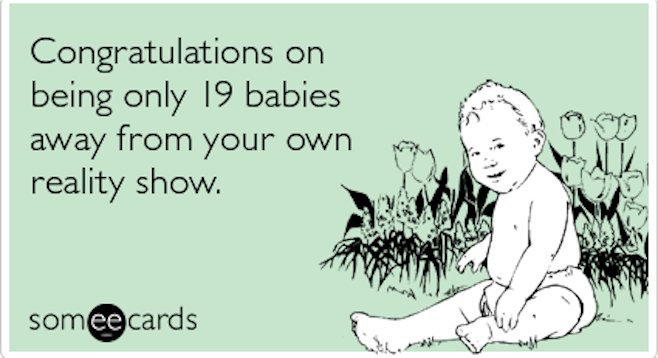 “Gah!” I grumbled at my computer screen.

“What?” Of course David had to ask. You can’t sit four feet away from someone who’s grumbling at her computer screen and not ask.

“Remember those funny cards I posted on Facebook?” David nodded. It had only been two minutes since I’d posted my message, narrating aloud as I did so because I assume David wants to be notified of everything I do as I do it.

While redditing, I had come across images of sarcastic baby congratulation cards. One card read, “Now that you’re having a baby, you can’t go to the spa whenever you want or travel halfway across the world at a moment’s notice. But I can! And I promise to tell you all about it.” The other read, “Congratulations! Babies are truly miracles. When they’re born, their feet are so tiny…yet they can somehow step on all of your hopes and dreams.”

I posted the images on Facebook along with the disclaimer, “These are for the child-free, and/or parents with no regrets and a good sense of humor.” Within minutes — two, to be exact — the gah!-worthy comment appeared on my screen.

“It’s one of those ‘life without kids has no real meaning’ sentiments,” I explained to David.

David rolled his eyes audibly. “If that’s his belief, that’s fine, but why the need to share it as a negative comment on someone else’s Facebook page? It’s like he felt like he had to counter your statement almost as a way of justifying for himself the choice he’s made.”

“Yeah, right? Here’s my response: ‘To assume that one person’s life choices result in real meaning but that another’s, what, have fake meaning? is just a gross misunderstanding of humanity. I get that you like your club. But try to consider your words. And all the known people throughout history who did things to change the world for the better, but, since they didn’t have kids, must have had no real meaning to their lives. Ugh.’”

“That’s good,” David said. He turned his laptop toward me. “Look — here’s a list of a bunch of famous people in history who didn’t have kids.”

“Or Oprah! I bet she doesn’t understand real meaning. How could she? You have to procreate to know what it is to have purpose in life. Otherwise, you might as well just kill yourself, because you’re really not adding anything of value to the world.” I sighed and took the two steps from my desk to sit in the chair beside David.

I recalled the day, 11 years prior, when David, whom I’d just started dating, told me he had no interest in having children. I had always assumed that having kids was something that would just…happen. It had never occurred to me to consider whether or not I wanted it to. I remember my astonishment when my immediate emotional reaction was an overwhelming sense of relief. In that moment, my future seemed brighter than ever and I knew in my heart that I was not meant for motherhood.

Because I experienced this epiphany so young, I was subjected to the usual audacious onslaught from friends, family, and even strangers who suffered from the delusion that they had a better handle on what I wanted out of life than I did. Often they were older — “You’re young, you’ll change your mind,” was the most common insolence. Every time someone dismissed my life choices, it was as though they were dismissing me as an individual human in my own right.

“It just amazes me how presumptuous people can be,” I said. David nodded in agreement. As a man, David had only experienced this particular form of presumption vicariously. People don’t tell men they don’t know what they want out of life.

“Telling someone else that the only way for them to experience real meaning in their lives is to live it the way you think they should is as absurd as telling someone they can’t possibly enjoy eating unless they cook the food themselves,” I said. By now, my face was growing so warm with indignation I had to get up and open the window for some fresh air.

“What’s rewarding to one person might not be rewarding to another,” I said as I returned to my seat beside David. “Think of the whole working-mother controversy. The ones who stay at home, the ones who work, it doesn’t matter — both always seem to be struggling to justify and argue the validity of one choice over the other. But they’re getting it wrong — they keep saying what they’re doing is the ‘best’ thing, when what they should be saying is that what they’re doing is the ‘best thing for them.’”

I finally stopped talking and looked at David, who had been sitting quietly during my rant. “You know,” he said with a wry smile on his face, “there really is something to that whole cooking thing. I mean, maybe you should give it a try.”

I glared at David, picked up my phone, and said, “That reminds me. I need to make reservations for tonight.”