I can understand why people think I don’t like kids. I don’t have any children of my own (nor do I want any), and I’m often the first to pipe up in a crowded area to chastise a lazy mom whose kid is behaving badly. But it’s not the kids I oppose, so much as the combination of noise, disorder, and sticky mess that follows them around like that cloud of dust that circles Charlie Brown’s buddy “Pig-Pen.”

Now that (under my direction) a number of my niephlings are old enough to make a decent cocktail and seem capable of independent thought, I find I actually want to spend time with them. Just not all at the same time. I have three sisters, so I know what it’s like to disappear into the crowd. At family gatherings, it’s adults on one side, kids on the other. If I’m going to connect with my nieces and nephews, then I must, like a lioness on the savanna, single them out from the herd.

I never wanted to be a godmother, in the Catholic sense, which was difficult for my family to digest. I didn’t want to stand before a room full of people in a church and promise to educate my godchild about a religion I do not practice. I’m more of a Fairy Godmother. I want to introduce my fairy godchildren to some of life’s wonders, and help guide them to toward their own “happily-ever-afters.”

Some of my fondest memories of my aunts and uncles involved what my Aunt Jane calls “quality time.” I can remember visiting her New York apartment and writing lyrics to go along with Aunt Jane’s piano compositions, which she would then sing as she played. She spoke to me as a peer, a friend, and because of that, I always felt like I could trust her. Plus, she was fun to be around – we played cards, hung out on her “veranda” (which had to be accessed by climbing through the kitchen window), and watched movies. 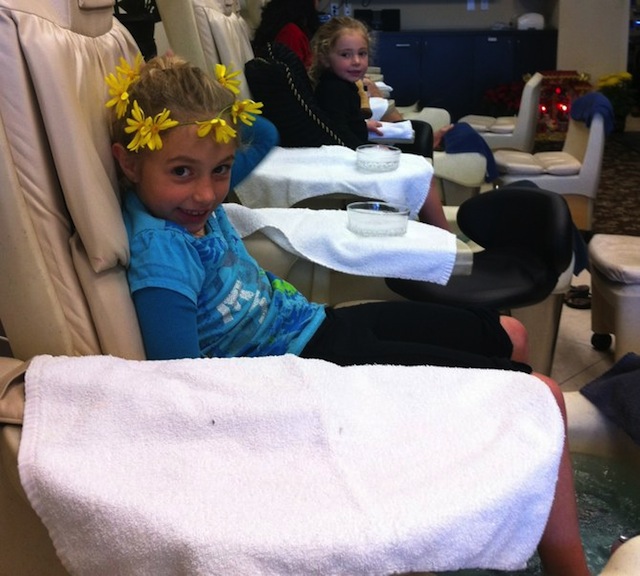 Aunt Nelle took me on an under-aged bar crawl through Brooklyn, and Aunt Diane and I continue to bond over all sorts of things, from our Irish heritage to our world-views. Aunt Carol and I bonded over a mutual love of fairies and things Native American. When any of my aunts spoke to me, I had her full attention, something that was nearly impossible to get with my own parents, who, with four daughters, understandably seemed more concerned about equality and fairness than individual favoring.

Now that I’m an aunt, it’s my responsibility as the adult to forge the foundations of relationships with my nieces and nephews. More importantly, as I’ve never been one for obligation, I want to gift them with unique experiences that will open their minds before they suddenly become adults in this big wide world.

My first opportunity recently arose when I missed my niece Bella’s eighth birthday party. I called her from Martha’s Vineyard, where I was spending Thanksgiving (the same day as her birthday) with my in-laws. “Just because I’m not there now, doesn’t mean I’m going to forget it was your birthday,” I told her. “As soon as I get back into town, I’m taking you out, just the two of us, for a special birthday celebration.” 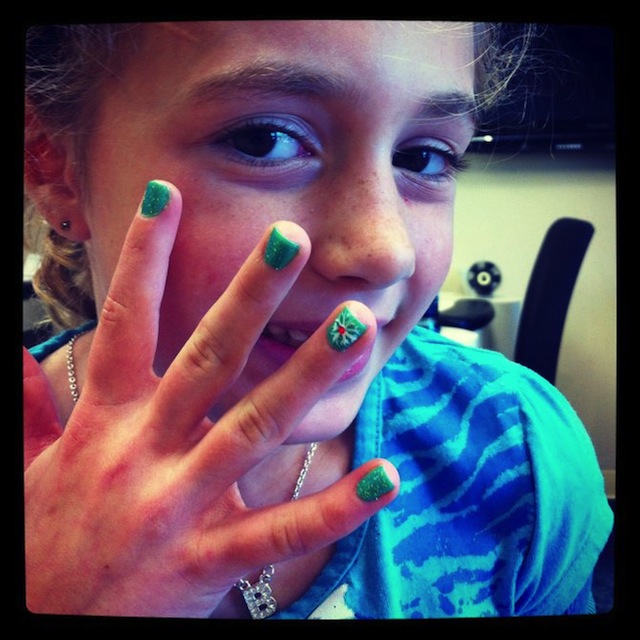 My plans began with a mani-pedi at my local salon. Bella looked devastated when Jane, my sister, insisted on coming along and bringing Bella’s little sister, Olivia. I could understand why Jane wouldn’t want Olivia to feel left out, and it’s true Jane was as due as I was for some foot-love, so I agreed. But I made it a point to not tell Jane where I was taking Bella after the salon, which seemed to delight my niece. It was a surprise, only for her, and she would be the first to know.

It turns out it’s very easy to show a young person the “time of their life.” It’s not like they have an extensive list of experiences to measure against. I could tell them anything. The temptation to seriously mess with their minds is strong, but I reminded myself that if I’m going to be an influence for free thought and world wonder, I’ve got to earn their trust by telling the truth, which is something that young, inquisitive minds eventually root out anyway.

So it was that, with our freshly massaged and painted extremities, Bella and I went our own way to spend some quality time. For lunch, I took her to Urban Mo’s in Hillcrest. I’d called ahead and told them it was my niece’s 8th birthday, and the staff went out of their way to make Bella feel special from the moment she crossed the threshold. They gave her an inflated gold crown, an inflated pink monkey, and, when she ordered a Shirley Temple, it came with eight cherries. “This is the second Shirley Temple I’ve had in my life” Bella said, as she sipped the fizzy pink drink. “And this is the best one,” she added.

We sat by the window so we could watch the street; Bella’s eyes darted everywhere, taking it all in. At one point, she became shy, looked at me sideways, and, touching her crown, said, “Do I get to keep this?” When I nodded, her whole body seemed to smile.

After lunch, I took her to Gelato Vero, where David met up with us. Having never had gelato before, Bella played it safe and ordered the Tahitian vanilla. “Do you know…” she said between licks, “that vanilla comes from a bean?”

“Did you know,” I said, “That we have a vanilla bean at our house?”

“Wow. I would really love to taste where my favorite flavor comes from,” Bella said. David and I shared a knowing look, and it was settled. We brought our niece back to our place, where Uncle David laid out three small bowls: one for the vanilla he scraped straight from a Tahitian bean, another for vanilla extract, and a third with sugar. Bella took her time tasting each, reporting her thoughts as she went. “This tastes just like my favorite vanilla ice cream!” she said, after combining sugar with some bean specks. 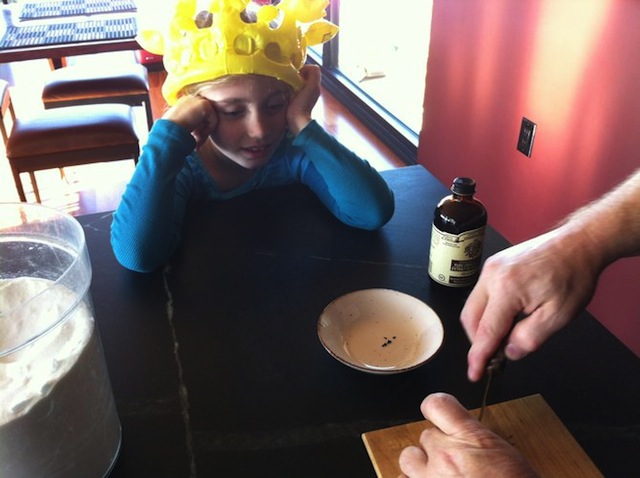 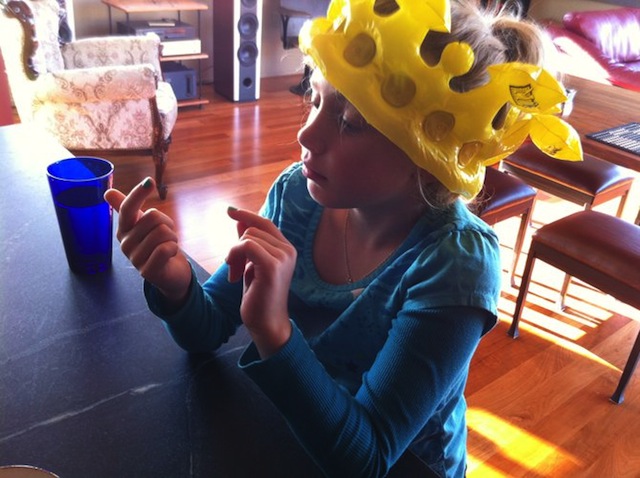 Later, as David and I were together in our kitchen preparing dinner, I said, “And tomorrow we get Brian.” David smiled, and again we shared that look, the one that says we’re both thinking the same thing. After we returned from Japan, I’d given our 7-year-old nephew a pair of chopsticks. While in New Orleans, I called to make sure he was practicing with them, because David and I were planning take Brian for his first sushi experience. “This is going to be fun,” I said, and David, with the same smile on his face, nodded. 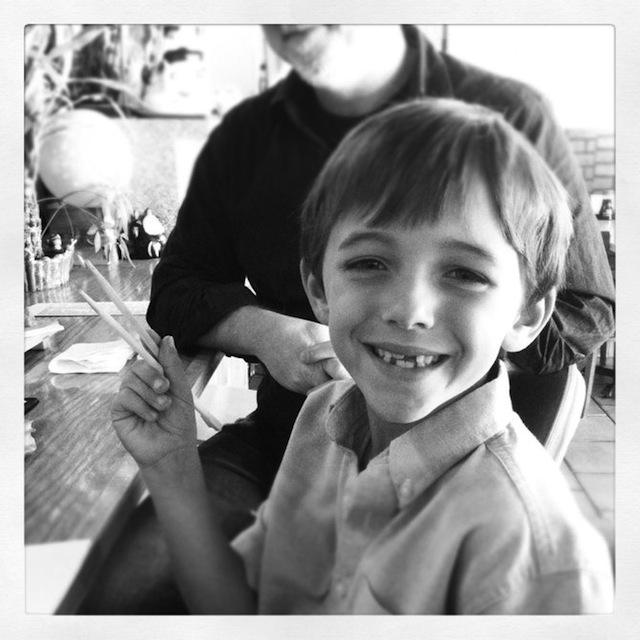