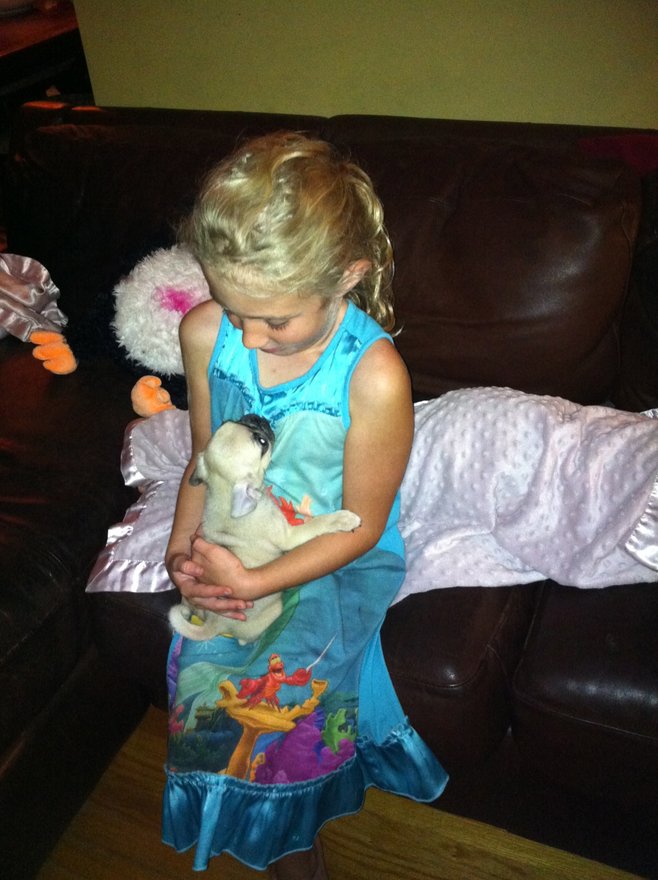 I’d known about Jane’s intention to get another dog after Winston, her elderly chocolate Lab, passed away several months ago. So I’m not sure why I was surprised when she stopped by my place on her way to a conference in Orange County to present me with a photograph of a pug puppy. “I’m going to pick him up today,” she said. I think it was the suddenness of the decision that took me off guard, the “maybe soon, and I don’t know” becoming a definitive “today’s the day.” And the breed — how do you go from Lab to pug?

Jane could see the confusion on my face. “Aren’t you happy for me?”

“Yes, of course, I’m just… I didn’t know you were actively looking. And that you found one.”

“Simon wants to name him Frodo, but I don’t know about that name,” Jane said.

“Do it,” I said. “The man is outnumbered by girls in the house, this can be his little buddy. Plus, Frodo is hilariously spot-on for a pug; they’re the hobbits of dogs. Do the girls know?” Jane smiled and shook her head.

There went my plans for the evening – there was no way I was going to miss the reaction of two little girls receiving a surprise puppy. Contrary to my expectations, however, when my father and I arrived to Jane’s house later that evening (after attending the annual Make-a-Wish Foundation’s volunteer appreciation dinner), Jane and Simon were way more outwardly excited than their daughters. Olivia, the younger one, had fallen asleep on the couch. When Bella nudged her and said, for the thousandth-or-so time, “Olivia, look at the puppy!” the sleepy four-year-old opened one eye and snapped, “I saw the puppy.”

“No,” David said when I walked in the door at the end of the night.

“What are you talking about?” I feigned ignorance to try and shake his confidence.

“We are not getting a dog,” David said. I furrowed my brows and made a little huffy noise. “Just get it out of your head right now.” He could tell I was at a precipice, and that if he didn’t push me back, hard, I would fall into an obsessive oblivion, not to be rescued until I had what I wanted, whether or not I destroyed everything in my path to get it. “No.”

I took a deep breath, let it out slowly, and said, “I know, I know. It just wouldn’t work. Too much responsibility, I know. It’s just nice to think about.” I held fast to my easygoing smile as David studied my face. Unable to take it any more, I changed the subject: “Did you read that piece about the nanorockets? Scientists developed these little rockets that travel faster than bacteria to carry medication to different areas of the body. Crazy cool, huh?”

We spoke of amazing scientific discoveries for an hour, and then David went to brush his teeth and get ready for bed. While he was in the bathroom, I went to my computer, and watched puppy videos on YouTube.