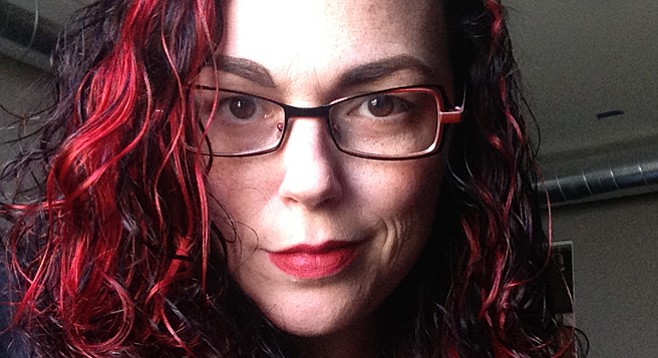 I inspected myself in the mirror over my sink in the bedroom. David was still in bed, skimming through news headlines on his iPhone. When he glanced up, I caught his eye in the reflection. “What do you think? Keep the red?”

“The upkeep is a bitch, but with all this sophistication showing, more upkeep in general probably isn’t a bad thing,” I said. By “sophistication,” David knew I meant the increasing number of silver hairs emerging along my hairline. “Silver’s super trendy right now, but I’m more of a red-and-black girl,” I added.

More often than not, over the past dozen years I’ve brandished at least one shock of ruby-red in my otherwise brunette locks. Just a few weeks ago, shortly before David and I left for our annual summer sojourn to Martha’s Vineyard, I got my red streaks brightened, my natural brown darkened, and the sophistication around my hairline suppressed.

One afternoon, while taking the scenic route to Edgartown for dinner, I asked David why he liked the red so much. “I think it’s pretty,” he said. I waited patiently for him to continue, because I know my man — aesthetics are the smallest part of how he measures a person. “It’s not boring, you don’t have ‘Mom hair,’” he said. “The red is funky.”

“You’d think it would be more prevalent,” I said. “I mean, think about all the seriously alternative people we know and how few of them have weird hair. Why is that?”

“I think there’s this fear about it,” David said. “I mean, when I decided to shave my head — that took years of building up courage. Which is ridiculous, because it would have grown back in a matter of weeks.”

“What is there to be afraid of?”

“I don’t know…afraid you’ll look bad? In hindsight, it’s a very absurd fear to have, but when you’re in it, it’s… When you’re facing that for the first time, say you’re not a habitual hair coloring/shaving person, and you’ve looked that way for 20 years, you’re kind of changing your identity. And that can be scary, especially if someone is not a particularly adventurous type or a risk-taker. Then it makes it even more daunting. You err on the side of caution — and to change your whole identity, well that’s pretty much the opposite of caution.”

“So, basically, my red says — what, that I’m bold?” I stared out the window for a moment at the green of the woods. “Women often tell me, ‘I love your red lipstick, I wish I could pull that off,’” I said. “And all I can think is, Why can’t you? Here, it’s easy, you take red lipstick, you put it on, and there — you’re pulling it off. They use words like ‘confidence,’ but I don’t see how wearing red lipstick has anything to do with confidence. You choose the blouse you wear, you choose accessories. It’s just another choice.”

“Yeah. People are judgy,” I said. Just the night before, at a social event, I overheard a group of old ladies gossiping about one man’s longer hair. “What’s with that ponytail?” One said, with a tsk-y tone, “Is he trying to relive his childhood or something?”

I reminded David about that, as he’d heard it, too, and then said, “I like to think that when people belittle others because of some non-cookie-cutter aspect of their appearance, it’s because they want to express themselves in some way, but are too afraid to do it. You know, like how the most vocal anti-gay dudes turn out to be closeted homosexuals. They long to be that free, and they feel that if they can’t, then nobody should.”

“Anyway,” I continued with a wry smile, “So you like it that I let my freak flag fly. Might as well let people know in advance what they’re dealing with so they can either step forward or turn away, right? But, seriously, what is it about having bright colors in your hair that…I don’t know…makes someone seem immediately more interesting? I’m not talking about me, I mean other people, like that guy at the Rep.”

David knew which guy I meant. It seems every time we catch a show at the San Diego Repertory Theatre, we notice this cool older dude, a lanky fellow with a relaxed disposition. We know he’s cool because amid his straight, shoulder-length milky white hair (perpetually pulled back into a neat queue) is one stripe of electric blue. Of all the proverbial “blue hairs” we encounter, this man — with his alluring azure — is the one I’d pick out of the crowd to sit beside. What is it about that blue strip of hair, I wondered. What message did it convey?

Answering my inner voice aloud, I said to David, “That guy’s blue tells me he’s not traditional, not uptight; that he enjoys a little color in his life. That he’s not afraid of a little attention. That he’s not boring. In fact, he calls it to himself. I mean, don’t get me wrong, there may be dozens of people around him with the same attitude, who are just as cool, but I wouldn’t know that at a glance. That blue streak is a beacon.”

We found a parking spot in the center of Edgartown, which is the preppiest town on the island. Here, men wear pink pants and whale-printed belts, and women wear white shirts and black capris. Just before we got out of the car, a 40-something woman and a boy of around 10 walked by us. Her hair was dirty blond from her crown to her chin, but when it reached her shoulders, it transitioned into dark streaks of blue, green, and purple. We turned our heads as she passed and stared after her until she and the boy disappeared around a corner.

“Now you see what I mean,” David said. “Of all the people on this street, she’s the one who is immediately interesting to me.” Thinking of my own hair, I couldn’t help but agree.