Ever After, a Study on Divorce 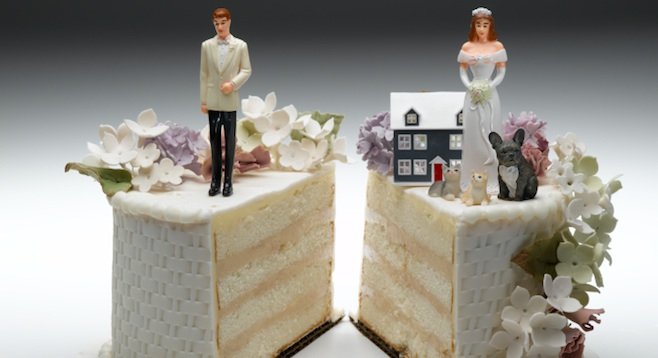 Divorce. There are few words I can think of that are more onerous. It seems appropriate that it begins with the letter D, just like the handful of words it reminds me of: doom, despair, desolation…death.

It’s one word, but it speaks volumes. Upon hearing it, you are thrust into another’s personal history. There was once love. And a promise. There was once a belief between two people that nothing would change, or that, if something did, it would be a change for the better; a mutually appreciated amendment to an agreement that was made while both parties were intoxicated with the most potent embodiment of devotion, the kind that leads two people down the proverbial aisle.

But that’s just the beginning of the tragic story that the word “divorce” recounts. For each syllable is a section — the first, a dazzling fairy tale of meeting, falling in love, and living happily ever after; the second, a harrowing chronicle that proves “ever after” was not so much a road paved in gold as it was a muddy obstacle course with the occasional land mine. Divorce says, “We once loved each other. And now we don’t. At least, not like that.”

As a teenager, I imagined marriage as a vase — a treasure kept on a shelf, either regularly polished or ignored and collecting dust until eventually, divorce knocks it over and it shatters on the floor. But, when my parents separated 16 years ago, I realized shattering was too clean a metaphor. Shattered pieces are easily glued back together, the cracks barely visible. No, marriage wasn’t a vase at all. It was a tapestry. It doesn’t shatter, it shreds. The fabric of a relationship is ripped into ragged pieces and colors get confused. Even when you attempt to sew it back up again, the edges remain tattered.

I always thought of divorce as something parents did, by which I mean it’s always been a thing for grown-ups. It’s the stuff that mid-life crises are made of. So, when a friend of mine, who is a few years younger than I am (on the earlier side of her 30s), announced that she was getting a divorce, I was dumbfounded. So soon? I thought, as if it would be preferable for a person to drag out the inevitable and then come to regret the wasted years.

Unlike the combative divorces of grown-ups that I’d witnessed as a youth, this couple was pretty cool about the whole thing. Probably because they both had the wisdom and maturity to recognize the early symptoms of a sick marriage…before seeds of anything dramatic and hurtful, like an affair, had a chance to take root. He had his hobbies and friends, she had hers, and there was virtually no overlap between their interests. They had grown apart. It takes just as much courage to accept that something is over as it does to try and make it work. It was honest. It was mature. Two concepts I had never before associated with the word divorce.

I have a few friends who have been divorced more than once. Some are on their third marriages. This is hard for me to fathom. Divorce is something David and I only say when we’re joking, as in, “What? No parmesan? I want a divorce.” Then again, I’ve only ever been in one serious relationship. And it’s not immune to distress.

In our 11 years together, David and I have hit two rough patches, during which we were caught up in day-in, day-out routines with little to no joy in between. I admit, I freaked when we came upon the first one. I thought, This is it. We’re having the talk. We were angry with each other, we blamed, we cried…but then we accepted, we listened, and, in the end, we embraced on common ground. We discussed what was bothering us, what we felt was missing in our lives, and then agreed to set goals and work toward them together.

That doesn’t make us better than couples who decide separation is best for them. If anything, it helps me understand where they’re coming from. All it would have taken was for either David or me to say, “No, really, I can’t live like this,” and that would have been the beginning of the end. The idea that either one of us could ever reach that point petrifies me.

My parents aren’t even divorced, not legally. Papers were served, but they weren’t processed in time or something like that. I’m murky on the details. Mom and Dad live their own lives, one in Mission Hills, the other in Chula Vista, a 20-minute drive. But at family gatherings — birthday parties, soccer games, Christmas — there they are, both of them in the same room, doting on the grandchildren and catching up with their four daughters. The bulk of the tapestry they wove together, the family, is still intact, but the parts that were my parents during my childhood are frayed.

Divorce isn’t the end. Like the wildfires that fertilize the soil for the most spectacular flowers to thrive, desiccated relationships must perish for some to truly blossom. I once attended a screenwriting workshop where the instructor, Robert McKee, insisted that characters should always end up with what they “really” wanted and that this was always different than what they “think” they want. I think about that sometimes when a friend is mourning the loss of something they “thought” they wanted and coming to terms with the fact that what they “really” wanted was something different.

I realize now, as I write this, that I was wrong earlier. Divorce isn’t a two-section story. It’s a three-parter. After the ripping and shredding, after the death of an ideal, there is a third section, with redemption as the central theme. I wish this for my friends, that they fly through the chapter on tragedy and right into the third section, which documents the picking up of pieces, the discovery of self, and then moving toward the promising light of a future with the realization that “ever after” does not have to be dependent on any one thing; or person.