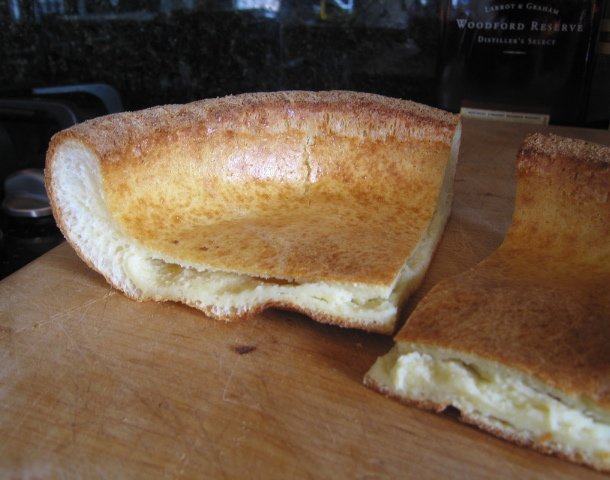 There are a lot of weird things people do when they’re inebriated. Some drunk dial (not recommended), others drunk drive (so very unbelievably uncool); some drunk smoke, some drunk kiss (or more, and stop looking at me like that), and of course, there are those who tend toward drunk dancing – the same ones who would never, ever dance when sober.

My man? He drunk bakes. Not the dopey smokey kind of bake — mixing pot with alcohol is a fast track to puking. No, David actually bakes, like with flour and shit.

I’d forgotten about this quirk of his, as we rarely have fresh baking materials (i.e., milk) on hand. We keep eggs and flour, sugar and salt, but we don’t drink milk; David only buys enough for whatever it is he plans to make for specific events. But the other night, my man made a discovery.

Our friend Terri was over – I’d lured her into our abode with the promise of wine so I could tap her creativity for a project of mine. After dinner and two bottles of PKNT, David went straight to the kitchen. He takes his role as host more seriously when drinking, as if the lightheartedness of a buzz compels him to be even more hospitable than usual. The wine was gone, and our guest could not have an empty glass, oh no, this would not do. David hummed his way around the kitchen to create a cocktail. He must have tasted quite a bit as he worked, because his smile was a little looser by the time he delivered our glasses.

A while later, David went back to the kitchen. He gasped as he opened the fridge. There before him was a gallon of milk, a whole great big white jug. Seconds after he closed the refrigerator, I heard the telltale beeping of the oven being preheated.

“Uh oh, I hope you left some room,” I said to Terri. “David drunk bakes. He’ll be offended if you don’t taste whatever it is he whips up now.” I explained to Terri that it was my sister Jane who left the milk. “She meant to bring it home, her kids go through the stuff like water, but she kept having to run errands after working and said it was easier just to leave it hear and grab another jug on her way home, I don’t know.”

To her credit, Terri accepted this information with a polite smile, as if I’d just told her I was thinking of getting my hair cut. I was amazed that David, who didn’t seem able to lift his feet entirely off the floor as he shuffled back and forth, had the wherewithal to fetch his laptop, find the recipe he was looking for, and successfully measure the right amounts of flour, eggs, milk, and salt.

About 45 minutes later, David served up a freshly baked popover. He topped it with ground salt and powdered sugar. “This is the best one you’ve ever made,” I said, as I reached for my second piece. “I’m going to ask Jane to leave milk here and then get you drunk more often.”