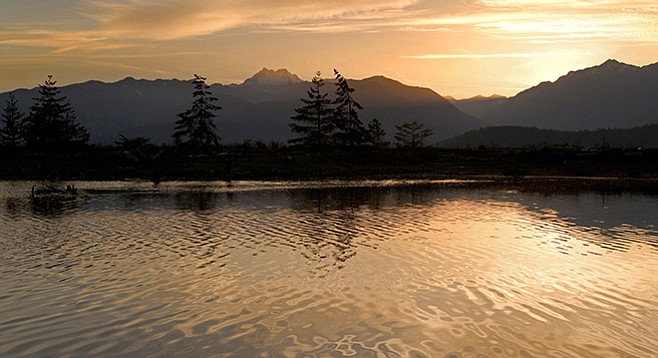 I listened to the sound of rain falling steadily on trees and watched as the water gathered into heavy droplets that fell from the green leaves on the other side of the glass. I took a deep breath and let it out slowly, allowing my mind to wander as I stared, mesmerized by the drip, drip-drip, drip — BZZZ! BZZZ! BZZZ! My heart skipped a beat as the glass vibrated to a series of synthesized, staccato pulses, my soothing scenery eclipsed by a floating rectangle. I tapped the notification. Gone were the trees and the peaceful rhythm of rain. Here was a message from a colleague, asking whether or not I’d received the email he’d sent.

David and I had laughed when we first heard of the Calm app, but that was mostly due to the ironic nature of how we came to be aware of its existence. Our friend Mark was in the midst of lamenting how difficult it was to relax, focus, and get anything done in a world where we are constantly distracted when his phone sounded an alarm and he said, “See? This is exactly what I’m talking about,” and held it up so we could read the notification. “It’s all these constant interruptions and demands for our attention that add stress to our lives,” Mark said. This is when David and I burst out laughing because the notification that proved our friend’s point read, “Have you had your moment of CALM today?”

Mark chuckled before insisting that Calm was “actually a pretty cool app,” but David and I couldn’t get past the ridiculousness of a virtual meditation guru that sent shout-y push notifications.

I downloaded the app the next day. Though I’d mocked it, the word “calm” had resonated. I could not remember the last time I’d felt “calm.” Relaxed due to inebriation, maybe; exhausted, of course; briefly amused, sure. But calm? Nothing came to mind. Calm was an abstract idea, something that seemed as wonderful as it was unobtainable. But there I was, staring at the little circle and waiting for it to stop spinning so I could see for myself what Calm was all about.

When David saw what I was doing, he shook his head. “Every year, we introduce more and more distractions into our lives as we blindly embrace the latest tech gadgets — I find it funny that all the solutions popping up to address tech stress and tech overload are technological ones,” he said. “Like, here are more apps to help you combat the effect of dealing with too many apps.”

David disappeared around the corner and then reappeared with a book in his hands. He tossed it on the counter in front of me. “I haven’t had time to read this yet,” he said, shrugging.

The End of Absence

I read the title aloud, “The End of Absence: Reclaiming What We’ve Lost in a World of Constant Connection. Ha!” I opened the back cover and read from the jacket, “‘Today’s rarest commodity is the chance to be alone with your own thoughts.’ Whoa. Now I’m starting to realize what you have against the new Apple watches,” I said. I had been surprised when David, who usually embraces the latest gadget, turned his nose at the idea of a smart watch.

“I don’t need something tapping my wrist all day long,” he said. “The solution for being agitated by all these intrusions is not another app — the solution is to turn off your phone or disconnect from the internet. But people can’t, because they’re addicted. I don’t know what they think will happen if they don’t check in.”

“Then they can wait longer,” David said. “Our lives should not be on call.”

I remembered a similar conversation I’d had with my mother years before. We were catching up over coffee and my phone buzzed. Mom was beside herself when I didn’t check to see who was calling. I remained impassive through her increasingly histrionic questions. “What if someone has a flat tire? What if someone’s hurt?” My answers were all along the same lines: “Then they’ll have to call someone else, especially if they need a tow truck or an ambulance.” When she asked the final question, about how I’d feel if someone died because I didn’t answer the phone, I responded, “I’d be sad.”

Mom — a woman so dedicated to her brood she’d shush the pope if it meant she could better hear one of her daughters or grandchildren crying out for her — assumed my disinterest in checking my phone could only mean I was apathetic to all of the horrific plights of my loved ones that she was now imagining. I convinced her that it was because she meant so much to me, because I was cherishing my time with her that day, that everything else could wait.

And now here I was, arguing in favor of more interruptions lest I “miss something.” I shook my head at myself and returned my attention to David. “Attention is a commodity,” I said. “I’m pretty sure I’m squandering my riches in several areas.”

The Power of Now

The 7 Habits of
Highly Effective People

Long before any of us had a smart phone, my father introduced me to Eckhart Tolle’s The Power of Now: A Guide to Spiritual Enlightenment. This was around the same time everyone who worked in an office was required to read Stephen Covey’s The 7 Habits of Highly Effective People. I ridiculed such self-help books while out partying with my friends, but when no one was around, I studied those hokey but inspirational tomes. Now I wondered whether or not I should find those old books and dust them off for a re-read.

Ambient music and the sound of the ocean emanated from my phone. The app had finished downloading. A question appeared on the screen, asking if I’d allow push notifications (sounds, alerts, badges). I pressed “Do Not Allow” and took a deep breath. I was feeling calmer already.