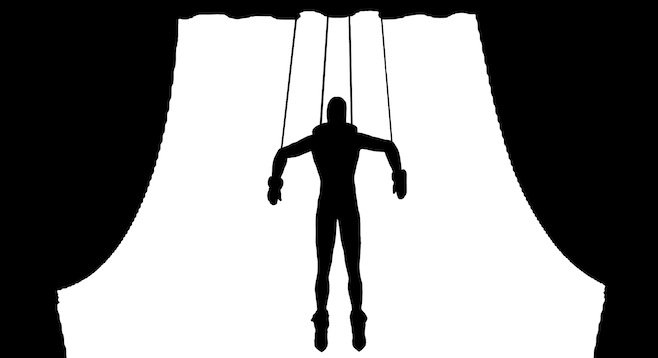 My friend and creative cohort Terri likes to joke about how manipulative she thinks I am. “I’m not manipulating you,” I’ll say, to which Terri will respond, “How do I know that your saying that isn’t part of the manipulation?” Sometimes I smile and raise a brow as if to say, You’ll never know. I like to watch her facial tics as she tries to work out whether or not she’s being played.

It’s true I know how to manipulate, but I use my powers for good by calling out manipulation where I see it. Recently, my friend Andrea came to me with a conundrum — her old friend Kelly asked Andrea to be her bridesmaid, and Andrea was afraid to say no.

“I don’t want to be her bridesmaid,” Andrea told me. “She acted like Bridezilla before she was even engaged! This would be so much time and money and, oh my God, the drama. I don’t even want to go to the wedding. But she’s gonna get all upset, and cry, and call me a bad friend. Am I a bad friend?”

“Andrea, all this obligation and pressure you’re feeling to do stuff you don’t want to do means you’re being manipulated,” I said. “Trust me, I’m like a manipulation divining rod.”

I grew up in a household that was a minefield of passive-aggression, with Catholic New Yorkers for parents and four sisters all competing for attention and resources — there isn’t a Ph.D. program in psychology that could have better trained me to spot, block, counter, and defeat inbound manipulation. Statements such as, “If you really cared about me,” or “Your sister would do it this or that way,” are as easy for me to decipher as the Matrix is for Neo.

You’d think such awareness would make me a master manipulator. But I’ve found a more effective method for getting what I want — frank honesty. Manipulative people seek what they want through underhanded tactics. They go to great lengths to hide their aggression because they fear their selfishness might be exposed. Instead, they try to make everyone else seem selfish for not bending to their whim.

“Are you sure I’m not just being selfish?” Andrea asked. She looked so distraught, my heart went out to her.

“No, not at all,” I said. “It’s normal to look after your own interests. We all work in our own self-interest. When I grant a favor for a friend, I’m hoping to garner that person’s affection. What can I say…I like to be liked,” I laughed.

“Kelly’s the one being selfish,” I said. She expects you to prioritize her interests over your own, and when it looks like you’re not going to, she tries to make you feel bad about it. Any good relationship, whether it be family, friend, or colleague, must be mutually beneficial.” Andrea nodded, and I continued, “Kelly doesn’t care about what you want. She wants to take more than she’s willing to give, and that throws the friendship symbiosis out of whack. It’s been tipped in her favor for who knows how long. She’s an egocentric, needy mess, and like any manipulative person, she resorts to covert tactics to distract you from catching on and righting the scale.”

“I just feel so drained every time I see her,” Andrea said.

“You’ve been saying that for over a year now,” I said. “You’ve got to dump her. You can’t keep avoiding the issue and suffering in the meantime.”

“It’s not that easy,” Andrea argued.

“It can be,” I said. “Think about it — what does Kelly bring to your life? From what I hear, it’s nothing but grief. She stresses you out and she demands too much of your time and energy without offering anything in return. Drop her.”

I could see a flicker of hopefulness dash across my friend’s face, only to be replaced by cynicism. “She’ll hate me.”

“So what? That’s even easier, then you’re done with all this stress. She’ll be out of your life. You don’t lose anything.” But then I remembered how susceptible Andrea had been to her friend’s chronic machinations. Severing a relationship is never comfortable, and with needy, dramatic, manipulative people it’s an absolute nightmare.

“She’s going to ask you why,” I said. “Whatever you do, do not answer that question. All that does is open the door for more manipulation. If you give some lame excuse like you can’t afford the dress, she’ll offer to buy it for you, and then you’re back in a corner of objections that she will easily overcome because they’re lame lies.

The only thing that can solve this is honesty. Just be calm and firm. And speak the truth. You don’t want to be a part of her wedding. When she asks why, and she will, just say it doesn’t matter why — you’ve made your decision and you hope she can respect it. She’ll call you a horrible friend. Turn that around — tell her you’d hope that, as your friend, she would respect your wishes, even if she doesn’t agree with them. She’s going to say she can’t believe you’d do this to her. That you must not love her or care about her. Keep calm and stay firm. Tell her you don’t intend to hurt her feelings, but this is just where you are right now, and you’re not interested in being a part of her wedding. You wish her all the happiness in the world, but you’re not going to be there. And that’s it. No apologies, no excuses, just the truth — you don’t want to be a part of it.”

The next day, I got a call from Andrea. “Wow,” she said. “I did it. I told her. She got angry, then she tried to be understanding, but then she got sad and said how much I was hurting her, and I was, like, ‘That wasn’t my intention,’ but when I didn’t rush to make everything okay, she got angry again. The whole time I just stayed calm and on script. It was amazing. She wasn’t happy about it, but there was no changing my position, my decision had been made. I feel so…so free.”