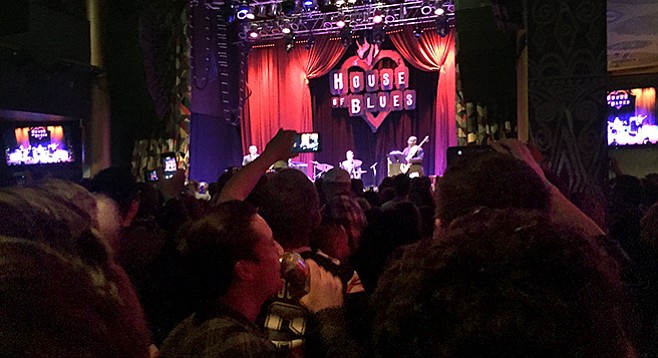 I pulled the car to the curb directly in front of the entrance to the House of Blues and congratulated myself for yet another punctuality coup. “The early bird gets the…nest,” I said to David with a smile.

Neither David nor I had heard of the band we were here to see; friends with tickets had invited us out. But its name gave us a clear enough description of what we were in for: Richard Cheese and Lounge Against the Machine. We could dig it. After all, the lounge version of Soundgarden’s “Black Hole Sun” — as performed by Steve Lawrence and Eydie Gormé on the album Lounge-A-Palooza — has long been a staple on all of our cocktail-party playlists. David even decided to dress in the lounge spirit, in an ensemble I referred to as “the after-party” look: a tuxedo with the bowtie untied and hanging from his neck, as if he’d just attended a fancy event, and was now ready to join the boys for a whiskey and cigar. David (right) in his lounge tuxedo

For once, I was relaxed about the time. Our tickets were general admission (no seats, all standing), so we enjoyed dinner and drinks at Saltbox, the restaurant next door, before heading back to the venue with ten minutes to spare. On our way in, we ran into my friends Mark and Zim, who were with their own group. The place was packed; it was a sold-out show. We joined Mark and Zim’s group, making us around a dozen total, and pushed our way through the crowd until we found a place to stand.

The last few events I attended at the House of Blues were private affairs, held either in the front room or the event space downstairs. At those parties, there were far fewer people and the occasional seat — not that I minded standing. I’m all about being on my feet: I’m still rocking my standing desk after five years. So, standing for the duration of a show was no big. But standing in a packed room with over 300 people is a different story. On all sides, some part of another person touched some part of my body. We were repeatedly nudged and jostled as folks made their way from here to there and back again.

The show had begun, and Mr. Cheese was doing his thing — a practiced comedy schtick that involves performing popular rock and rap songs replete with vulgar phrases, in the delivery style of Frank Sinatra and Dean Martin, accompanied by a jazz trio. It was easy listening and provoked the occasional smile at a joke or smoothly executed verse, or, more frequently, it elicited amused groans at a crude pun or naughty word.

Apparently, a good number of the people in attendance, including our friends, had seen this performance before. The man onstage admitted that there were no variations in this show. So, soon enough, attention was divided between the stage and the crowd, as a number of people shouted their conversations over the music. David, who’d never seen the act, just wanted everyone around him to shut up (including me, as I found myself catching up with Zim, who had just moved back into town), so he could enjoy the show. It occurred to me that this band was better suited to venues that catered to the concept of “lounge,” with a relaxed, seated crowd, somewhere with table service, perhaps. House of Blues is more of a “get lost in the music” kind of place; the big open floor is conducive to dancing and would ideally be less crowded, as I couldn’t imagine these sardines whipping and nae nae’ing all over the place.

I was suddenly aware of the thickness of my own jacket — a black brocade fabric lined with a deep purple silk that was visible only where I’d folded the sleeves at my wrists. The room was stifling. I looked to my left, at three of the people who had arrived with Mark and Zim. A guy, his sister, and his girlfriend. Two of them were tall, and the third (probably the girlfriend…I wasn’t sure who was who) was at least a head shorter. She was standing between the others and seemed to be in distress. I asked what was up, and the guy told me everything was okay. That’s when I noticed the tall ones were pretty much holding the shorter girl up, and that she was fumbling with her arms behind her back in what seemed to be an attempt to remove her thick coat. “She needs air,” I said. “It’s hot in here, I think she’s fainting.”

“It’s okay, we’ve got it,” the guy said. But they clearly didn’t. All they did was push up against her to keep her vertical, which neither helped her remove her jacket nor allowed her any air.

Every group of friends needs a go-to guy — the one you know you can count on to make things happen. Among my friends, that guy is Zim. He’s the one who doesn’t smoke but carries a lighter for anyone who might need it; he’s a “let’s settle this peacefully” sort who happens to be trained in martial arts, just in case. Zim was standing in front of me to the right. I tapped his shoulder and said, “Yo, that chick’s about to faint, and they’re not doing anything about it — handle it, will you?”

I wasn’t even finished with my sentence before Zim pushed through those standing between him and the trio. “Let’s get her out of here,” he said. The guy put up a hand to indicate he had it under control, but Zim moved in as if to grab her himself, and a moment later, the guy managed to get the girl in his arms and carried her to the exit, where I’m told she got some air and felt better.

When the show was over, we carefully stepped over trash and around sticky puddles. “Ugh. People are disgusting,” I said.

“You know, there was this other room with comfortable couches, a bar, and big TVs, where you could hang out and watch the show? I wish I’d stayed in there,” David said.

“Or just go to less popular shows,” I joked. “But seriously, I hate people in large groups, unless I’m the one onstage. Fortunately,” I added as we exited the building and came upon my car five paces later, “we don’t have to go very far to escape them.”