Death of a Darling 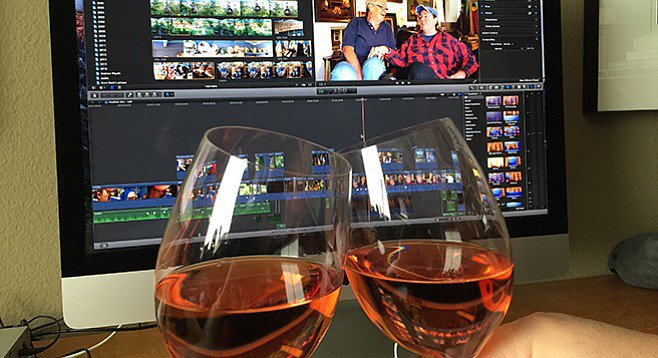 ‘I don’t say goodbye, that’s all. I’ll just see you when you come back. It’s so much…easier. Ever since I was a little kid, because I was here all winter long and the summer people came, and I’d have a wonderful, wonderful summer, and then they left, and I was supposed to stand there and wave goodbye to them…well, it was too hard for me, I used to cry all the time. So now I don’t say goodbye,” said Jane, an antique-shop owner who’d lived all her life on the island of Martha’s Vineyard.

Jane had told this story while we were filming in her shop a year ago. I’d barely noticed her words at the time, but now I could recite every word, and mimic each intonation. She had been speaking quietly, almost to herself, as she wrapped fragile porcelain cups in newspaper. It was only when, months later while reviewing the footage, that it struck me as a rare confessional moment, something sweet and touching and unexpected from an archetypal Yankee. And now, I was arguing to lose it.

“Kerry was right,” I said. “This part just slows everything down.” Invoking Kerry — our Hollywood screenwriter friend — gave me the upper hand.

We sat side-by-side at David’s desk, facing the screen on which Jane was frozen in the act of handing over the bag.

“I don’t think it’s quirky so much as sad and sweet,” I said, “but that’s neither here nor there. It has to go.”

David let out a sound that was half grunt, half call-of-the-wild, and said, “We need texture!”

Artist Heather Neill buying teacups from Jane on the Vineyard

“You don’t have to shout. I’m right here.” I spoke softly, to counter my man’s rising blood pressure. “We have plenty of texture — the shop itself is texture. But just like you said when you made me cut the part about Pat’s hospice work, this film is about the artist — about Heather. It’s not a film about her wife or the lady selling her the cups. Trust me, I love the story, too — I’m the one who put it in. But now I realize it drags, it doesn’t further the narrative. You know it has to happen. We have to kill a darling.”

The painting Heather Neill ended up making of those teacups, called Oversouth Willow.

David made as if to balk once more, but I cut him off: “You know the rule.” I was referring to the pact we’d made three years ago, when we were working on our first major production — if something is going to make the final cut, we both have to agree on it. We soon learned that if one of us didn’t like something, the end result would always be less than good. It only took a few “I told you so’s” before we came up with the rule: that no project is complete until we agree on all points, no matter how long it takes.

David dropped his head and, with the faintest hint of a smile, whispered, “I hate you.” This phrase, always muttered, seemingly more to himself than to me, has become the swan song for each of his arguments in their moment of death.

As I was signing paperwork for our intern, Eric, on his last day of the semester, Eric said, “It took me a long time to figure out that you two weren’t actually mad at each other.”

I laughed, more of an embarrassed giggle, as this was the first time I’d ever considered how my creative arguments with David might be perceived by others. So often it’s just the two of us. When trying to reach an agreement under pressure, we skip niceties and speak frankly, almost rudely, in the interest of time. I remembered a particularly heated exchange during a recent shoot on which Eric assisted, when I was tasked with monitoring our time, and thought David was taking too long on one shot. When we watched through the footage later, I cringed at how sharp my words sounded as I snapped at David to hurry up. And I recoiled at the apparent anger in his voice when he barked at me to back off, which in that case, I did. At the time, however, I’d never felt that David was angry. I didn’t back off because he snapped, but because what he said helped me realize that the shot was important and warranted the extra few minutes.

To Eric, I explained, “No, we’re never really mad at each other. It’s just our process. It’s not like David’s ideas are the best or mine are the best — we believe there is an objective ‘best,’ and we both have to work to find it and agree on it. It’s not personal. We have no ego in it. He’s right just as often, sometimes more, than I am, and I’m glad for it, because I wouldn’t get to the best on my own.”

Visions of Home: CLICK IMAGE FOR TRAILER OF THE FILM

The Work of Heather Neill

On this latest project — a documentary about the artist Heather Neill — we’ve spent more time arguing than ever before. It’s the longest film we’ve made, and it’s also the first one to premiere in an actual movie theater. Because of our love of the subject, our arguments for the “right” call have been extraordinarily passionate.

“You don’t hate me,” I said in the light, friendly tone of someone who’s just won. “You just know I’m right.”

I stood up, kissed him on the head, grabbed his glass, and said, “I’m going to get you some more tea, love, while you make that cut.”