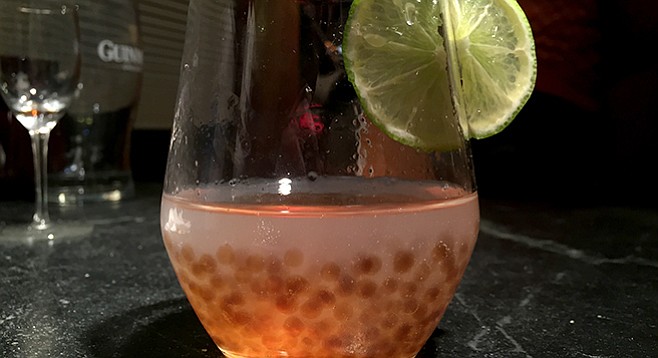 “I brought the emotion blender,” Jordan said with a smirk. He held up a box containing his immersion blender, which I’d erroneously thought was called an emulsion blender, and which my phone autocorrected to emotion blender when I’d texted my request to borrow it. Jordan insists the appliance must hereafter be referred to by my doubly incorrect and apparently twice as funny misnomer. I was just happy to have one in the house, as this tool was my ticket to awesome.

It had been four years since I gifted the molecular gastronomy starter kit to David and three years (after watching my gift sit on a shelf for a year) since I made my first foray into food science. My attempt to transform liquid peach schnapps into solid spheres resulted in a huge mess and a handful of tiny, grotesque gelatinous splats. Neither David nor I were surprised at my kitchen-lab failure; I chided myself for rushing ahead of my chef-ish partner and experimenting with a trio of subjects I had no understanding of and no patience for: chemistry, physics, and cooking. We agreed it was best for me to wait until David was ready to tackle the instructions and create something spectacular.

But after three years went by, during which the kit collected dust in a cupboard without so much as a passing glance from its owner, I realized that if I wanted to see molecular magic, I’d have to make it happen on my own. I also realized I’m not as good a gift-giver as I thought, because David wasn’t all that interested in breaking out the beakers.

Upon recalling that messy night in the kitchen three years ago, I concluded that my flop could be traced back to two missteps on my part. First, instead of attempting to execute a recipe using the kit’s pre-measured packets of plant-based, mystical form-changing powders, I’d selected a recipe from the internet and “winged it” with the measurements. My second mistake, I was sure, had to do with using an old hand-mixer and not the immersion blender that was recommended. A blender, I recently learned, that my friends Jordan and Katie happened to own.

This time I took my research seriously. I not only watched the DVD that came with the kit, I also took a photo of each step in the process so I could refer to it when I was elbow-deep in science. I also enlisted help. Jordan was the perfect cohort — he enjoys a good cocktail and dabbles with mixology at home. He’s going to school for engineering, so he could help with any math-related challenges that arose. And, of course, he had the “emotion” blender.

For so many years, being bad at, and uninterested in, chemistry and cooking was part of my identity. I couldn’t explain my urge to dive into the deep end of an endeavor that required an understanding of both disciplines. But there was an urge. I was so thrilled, the directions were machine-gunning out of my mouth to Jordan: “I’m going to put the tonic, Aperol, and sodium alginate in that container, and then you need to emotion-blend it while I’m over here mixing the calcium lactate and water in this container, and then we’re going to use these eye drops to drop the tonic mixture into the calcium lactate mixture and it should form little spheres, okay?”

Tonic spheres in glass, just before we poured gin over them

David thought it ambitious of me to plan on three different recipes, but I didn’t know when I’d have another chance to make this happen. And anyway, they were all cocktails, so we’d just be dealing with liquids, no food. The first was a gin and tonic. For this one, the carbonated tonic would be in the form of small, caviar-like balls, and the gin would be poured over them. The second was a Cuba Libre, a classic cocktail of cola, lime, and white rum. We’d create spheres of cola (Diet Coke), and the rum and sugar would be thickened a bit using xanthan gum, so that the cola bubbles would float around and remain suspended. Finally, there was the Portotonic, a cocktail favorite of mine I discovered while in Porto, Portugal. This one was a little different, because instead of tiny balls, the port would be formed into larger spheres to be floated in the tonic. Here’s where I went a little too ballsy — this recipe was for a Snake Bite, which called for dark beer and cider. I was substituting ingredients and crossing my fingers.

I wasn’t aware of how laser-focused I was until, about two hours in, Jordan asked to take a break. Using eyedroppers, we’d squeezed each of the hundreds of minuscule orbs before us by hand. It was time to evaluate our hard work. I scooped a bunch of tonic globules into a glass, and David poured gin over them. We did the same with the cola spheroids and rum goo.

The drinks were gorgeous — our cocktail caviar had turned out perfectly. The only issue was with the flavor. They tasted terrible. Because the tonic was in solid form at the bottom of the glass, it was more like sipping straight gin, and then, if you used a spoon, chewing the tonic. The Cuba Libre was much better, flavor-wise — the cola floated around, so each gulp included both, but nobody enjoyed the texture of the viscous rum. The Portotonic was a no-go; as it turns out, port doesn’t freeze well. Instead of large spheres, we ended up with a giant, gelatinous mass.

But I wasn’t fazed. Now that I know the basics, I’m confident I can come up with concoctions that taste as cool as they look. So confident, in fact, that I just bought my own emotion blender.