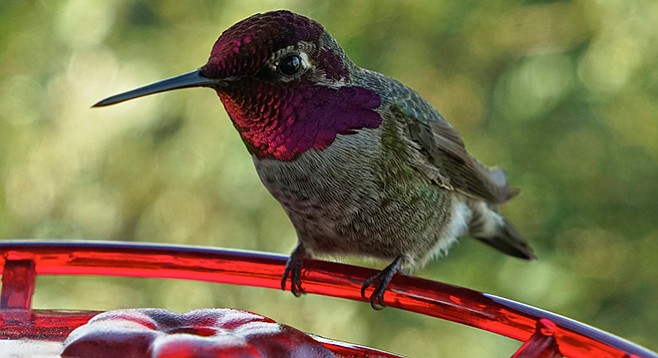 We stood at the window and watched as the hummingbird hovered in a stream of sunlight, revealing the dazzling emerald and brilliant ruby hues of its feathers. “I feel guilty, taking his food away,” David said, glancing down at the empty, washed hummingbird feeder in his hand.

“There are plenty of flowers on that hillside — I’m not worried about him finding food, I’m just going to miss him,” I said.

David suggested we ask our successors to install a feeder in the same place, but I nixed the idea and pointed out it would be not only weird but also pointless to attempt to control how other people used the space we’d called home for the past four years.

I’d always known the apartment was temporary; as such, I never formed much of an attachment to it. Not like I had to our home before this one, the first home David and I made together, the one we’d planned to live at forever, the one we lost, along with all of the money we’d put into it, back when the real estate bubble popped. I mourned that loss as I would a death because that’s what it was. The death of that last hopeful part of me that believed “forever” was real; that if I worked hard enough, bad things wouldn’t happen.

“It’s like we married our first love, and then went through a horrible divorce, and this was our rebound relationship,” I said. “But now, after realizing that first home would never have worked out anyway, and after proving to ourselves we’re capable of moving forward without it, we’re ready to settle down again with something real.”

David narrowed his eyes at me. “You’re going deep with this metaphor, aren’t you.” It wasn’t a question; he was stating the obvious to buy time so he could brace himself for the inevitable.

“Well, yeah, but mostly because it’s the first time we’ve befriended the people moving in after us. What if we’re invited back here? That would be like ending a relationship but maintaining a friendship, and then seeing your ex with someone new, and how it changes them.”

“You don’t even have an ex,” David said.

“You act like it’s some kind of shortcoming that I nailed this relationship stuff the first time around,” I joked. It may have been true that I had never experienced a break-up — I was still married to my first true love — but I’d been privy to plenty of them, and I knew the score. But I had been in a serious, long-term relationship with our last home. Before that, before David, my prior residences had been just like my prior relationships: short and casual. I’d move from one place to another and then pick up and move again, all without ever opening certain boxes — long-term boxes. When David and I bought a place and moved together, I unpacked and put away keepsakes I hadn’t seen since I first moved out of my parents’ place.

David and I entered this rebound relationship with open eyes. We were aware of the incompatibilities that would keep it from working out in the long run, namely the carpet tiles with the texture of a wire-haired terrier (a high-turnover project landlord’s dream, but David and I detest the scraggly things), the sharing of a single small bathroom, and the overall feeling that the apartment was just one size too small. Even so, in the final days, I grew sentimental about all of the major life milestones that had occurred in the space (e.g., that’s the window I stared out of when I wrote my first book, and there’s the room in which we edited the show that culminated in an Emmy). With one day to go, I tallied “lasts,” announcing in a solemn tone, “This is the last time we’re going to fall asleep looking at this ceiling,” or, “That was the last load of laundry we’re ever going to run in this machine.”

From the start, I kept my distance emotionally (e.g., referring to the apartment as our “place,” instead of our “home”). Growing up as a Navy brat taught me how to detach and move on, something my family had to do just about every two years. But David, despite knowing there was an expiration date on our digs, gave it his all. Because there was no way he could live with carpet tiles in the kitchen, David had hardwood installed. He added lighting and built an island. He put soft synthetic grass on the patio and built a shade to shield us from the sun. Six years at our “real” home before, and we had never gotten around to installing lights. It was always something we could “do later.” At our rebound place, David was determined to not let that happen again. Harnessing the excitement that comes with starting over, he rode the wave of momentum and finished all his improvements in the first six months. He did such a lovely job that our unit was featured on the front page of the U-T’s Home & Garden section.

David turned his back to the window to face the living room and I followed suit. “I form a bond with what I create,” he said. “And this place, especially the upstairs, design-wise and aesthetically…it was kind of perfect, you know? Everything worked like it was meant to be there. This was a masterpiece.”

“Yeah, beh-beh, but just think about how much fun it will be to have a clean slate and design a whole new space,” I said. “And we’ll have two bathrooms. And a real carpet.” Plus, and this went without saying because David already knew, we’d signed a much longer lease, which meant that — barring another economic crash — we could dig our heels in a little deeper once we settled in on the other side of the move.

Two days later, after a 13-hour tragic comedy of what was our worst moving experience to date, David and I stood at a window in our new apartment, all of our belongings stacked behind us. “Look, there,” I said, pointing. David followed my finger to the topmost branch on the closest tree, to the idle hummingbird perched at the top, swaying in the breeze like one of the surrounding leaves. “This is where we’ll put the feeder,” I said.

David smiled, and put his arm around me. “Yes,” he said. “This is a great spot for it.”